The thrill of it all | TRNTO.com
Skip to content 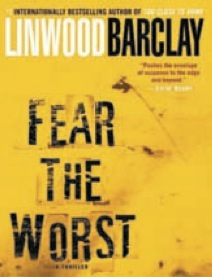 LOCAL HUMOUR COLUMNIST turned best-selling novelist Linwood Barclay is having a rough day. Just back from a month-long book tour in Singapore, New Zealand and Australia and on the day his new novel, Fear the Worst, is being released across North America, he is in the middle of major home renovations and shacked up in a one-bedroom apartment on Burlington Bay.

“It has a beautiful view of the Stelco plant … at least at night,” says Barclay.

Strange circumstances coming from the man behind one of the most stunning and successful novels of 2008.

Barclay’s latest effort, Fear the Worst, lives up to its title and involves a Honda car salesman named Tim and his daughter Sydney who suddenly disappears. The jaw-dropping melee, as he fights for her return, is in turns unbearably tense and shocking.

When Barclay’s breakthrough novel, No Time for Goodbye, appeared on the Richard & Judy television program (think Oprah’s book club) in the United Kingdom, it sold 9,000 copies the next day. But unlike previous feature novels, the rush didn’t stop or even slow down.

In the end, the book sold more than 600,000 copies, making it the top- selling book of 2008 in the U.K., beating out a plucky little wizard named Harry Potter in the process.

So how did a former humour columnist of 15 years with the Toronto Star become an overnight literary sensation?

“My editor in England thinks it is because we put trees on the cover,” Barclay says,
laughing.

“That’s part of it, I guess. I’m not an overly fancy writer. Long- winded descriptions bore me. I like to write about things people do and what they say, and that makes my books fairly accessible to a lot of people and fun to read.”

One part of Barclay’s mass appeal is an ability to place ordinary folk in the most unnatural situations.

“I think part of it is that people are able to connect with these stories,” says Barclay. “The hero in Fear the Worst sells Hondas. I believe my book is the first that has a car salesman in a heroic role…. They are not typically portrayed as heroic figures.”

Meanwhile, Eric McCormack of Will & Grace fame has purchased the film rights to No Time for Goodbye and is said to begin shooting this spring. A move that is sure to bring Barclay’s compelling novels even more attention.

WHAT IS R. H. THOMSON READING?

The Great War for Civilization: The Conquest of the Middle East, by Robert Fisk, is a stunning, detailed and impassioned book as interested in the human face of history as Paris 1919.

Barrington Street Blues, by Anne Emery. I’m looking forward to a fresh story, a new
world and a new author.

Thomson stars in the Soulpepper production of Antigone at the Young Centre (soulpepper.ca).