The top 10 new bars in Toronto | TRNTO.com
Skip to content 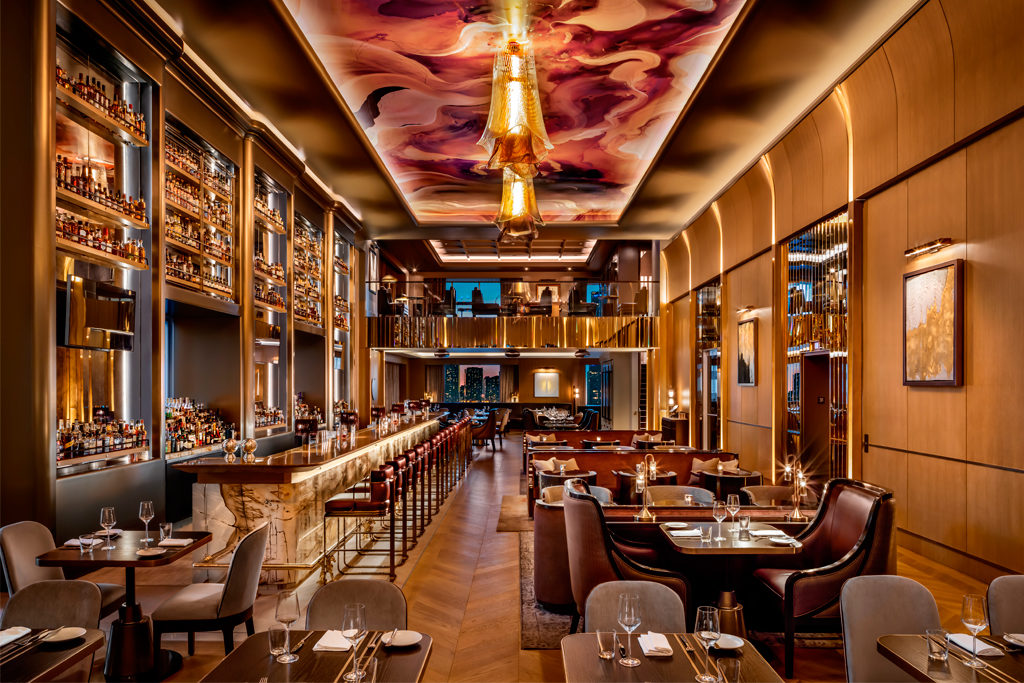 Sometimes all one wants to do is toss on a vintage fur and embrace a snazzy eve out. LOUIX LOUIS is here for those needs, high in the clouds on the 31st floor of the luxe new St. Regis hotel. A swirling mural resembling the bottom of a whiskey-filled rocks glass oversees the gilded space. Below, folks dabble in the 500-bottle-deep collection of dark spirits. The cocktail menu shares the history behind the drinks, like the Hanky Panky — gin, sweet vermouth and Fernet Branca — which has a feminist bent, created by the first lady head bartender at the American Bar in the Savoy. Highfalutin patrons can keep their private bottles in an on-site cabinet, serving their guests when keen to impress. 325 Bay St. 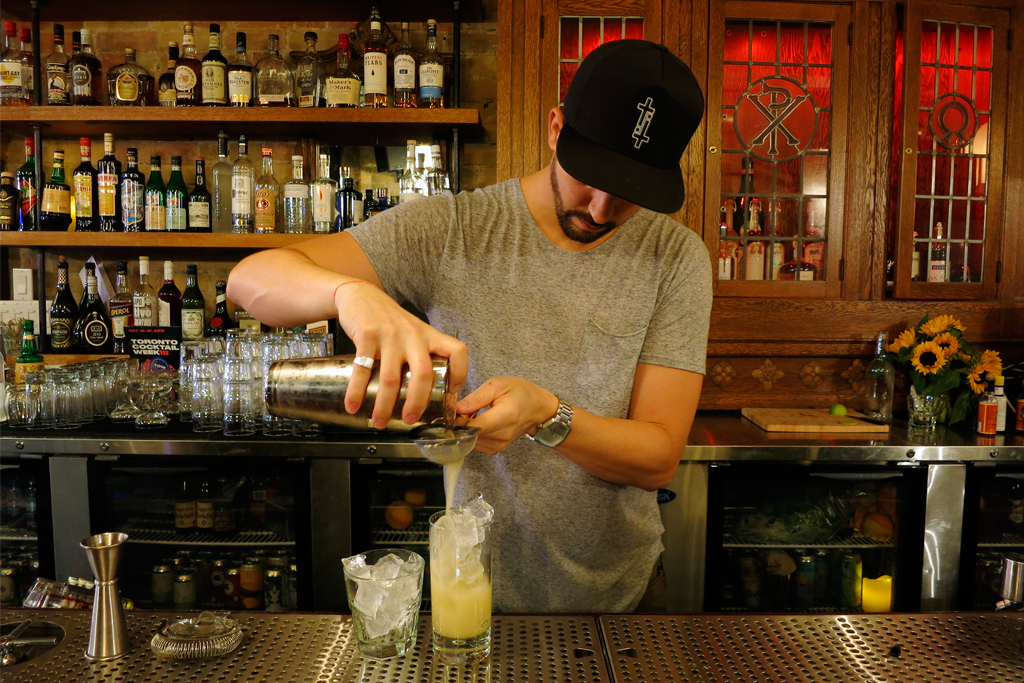 Co-owner Adam Kelly behind the bar at Vatican Gift Shop

The Pinkerton’s kids have been busy. This trio of Gerrard East entrepreneurs now has a third jewel in their crown: the VATICAN GIFT SHOP. This bar takes a Catholic theme and runs with it. Candles flicker atop candelabras, crosses abound, and there’s even confessional. While ’80s and ’90s jams add nostalgia to the space, barflies sip on local brews from Left Field or craft cocktails. Ride the Cliché pairs tequila blanco with Amaro Nonino, lemon and ginger beer. Pizza, naturally, is the focus of the food offerings. Popular are the San Baglio, with sausage and kale, and the mortadella, artichoke and olive-studded Capricciosa. Post-meal, those looking to let loose can hit the dance floor come 11 p.m. 1047 Gerrard St. E.

TOP DRINK: Ride the Cliché
SOUNDTRACK: ‘80s and ‘90s jams
FUN FACT: The tin that covers the bar is from a 150-year-old building’s ceiling 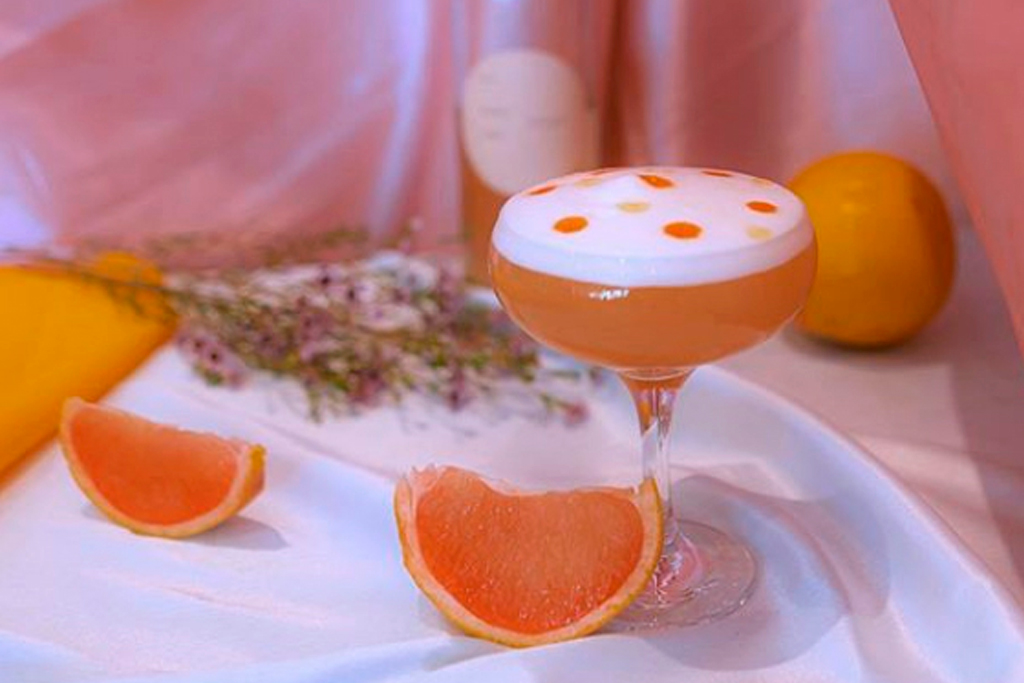 The olive oil sour at Blua

Step into BLUA on a frosty eve, and you’ll be greeted like family. It’s fitting that the new Junction bar is a family affair. Brother and sister Ade and Lea Gashi are game to showcase their Albanian roots in this Balkan-inspired bar they’ve dressed in blonde woods, macramé-wrapped potted plants and a mural centred on a sunrise. Here, summer’s but a breath away. Libations include the Balkan Negroni, which marries honey-infused raki to Campari, Montenegro and lavender vermouth for a sweeter take on the classic sipper. There are also a handful of brews on tap, like Beau’s and Henderson. When it comes to food, the cevapi stands out: the pillowy lepinja bread hugs minced veal kebab with sides of unripened kajmak cheese, onion and ajvar red pepper spread for a satisfying sandwich. If you’re lucky, they’ll have oven-fresh carrot cake studded with walnuts for dessert. 395 Keele St.­­­ 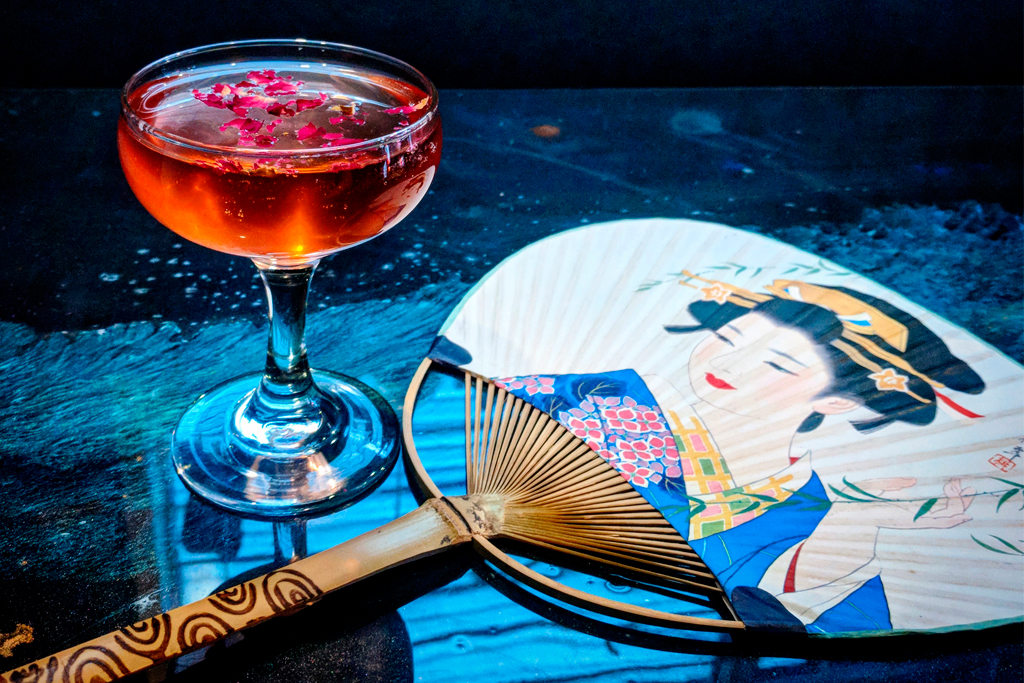 The Onna Yokai at Koi Koi

Nestled in Kensington Market, KOI KOI SAKÉ BAR​, from the folks behind the neighbouring Sukoshi Mart, boasts playful design touches like kabuki masks and lamps crafted from Japanese hanafuda cards. Sakes from all corners of Japan are on offer, with tasting notes listed beneath each pick. Newbies reach for the Dewazakura Oka Ginjo with a melon finish. On the menu, the salmon ochazuke is a comforting dish: a bed of rice is topped with grilled salmon, bonito, dashi and a pour of ume green tea. Each day of the week boasts a different highlight, be it live music on Tuesday or sake Jenga come Friday (think: a bowl, chopsticks and one carefully balanced cup of sake). 170 Baldwin St. 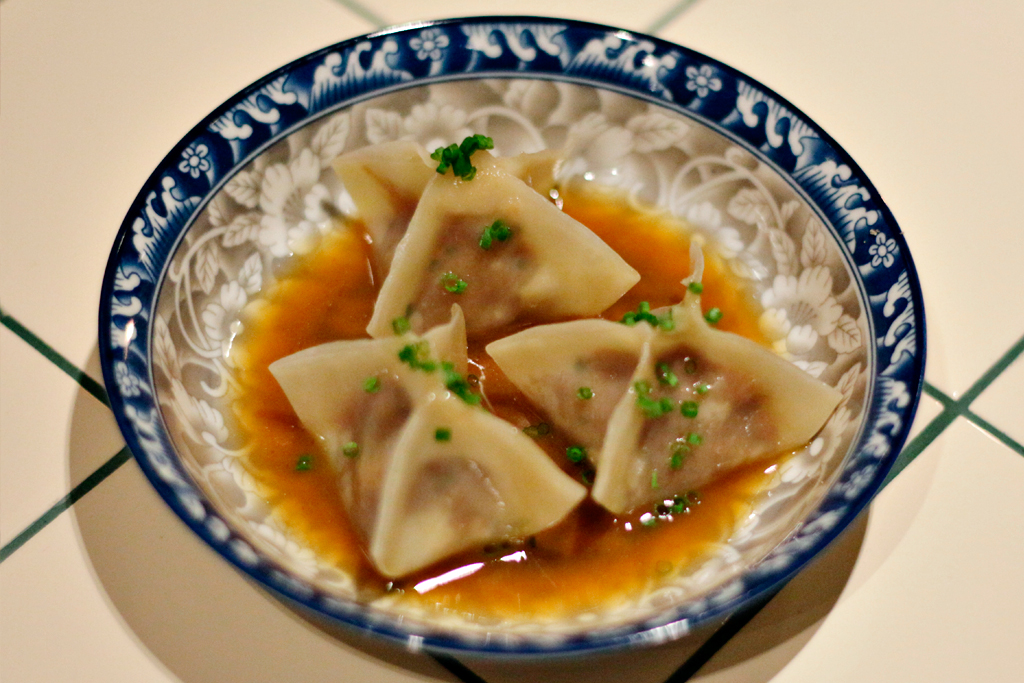 The duck dumplings at Mother Tongue

Walk to the back of the Templar Hotel and down the stairs and you’ll come across MOTHER TONGUE, divvied up into a ground floor restaurant and subterranean lounge. Bathed in violet light, the moody lounge features bronzed mirrors and a jeepney-inspired ceiling, for those familiar with this mode of transportation from the Philippines. Filipino influences extend to the menu, although chef Francis Bermejo happily dips into other Asian cuisines for his food. The scarfable longganisa “sanwit” gussies up house-made pork sausage with manchego and cabbage. Duck dumplings are uber popular, filled with a blend of confit duck and foie gras, arriving in a pool of broth. Cocktails sport nostalgic names. The Big Bop (remember, Queen Street denizens?!) is a boozy stirred cocktail with rye, bittersweet Cynar and red vermouth. Story time! 348 Adelaide St. W. 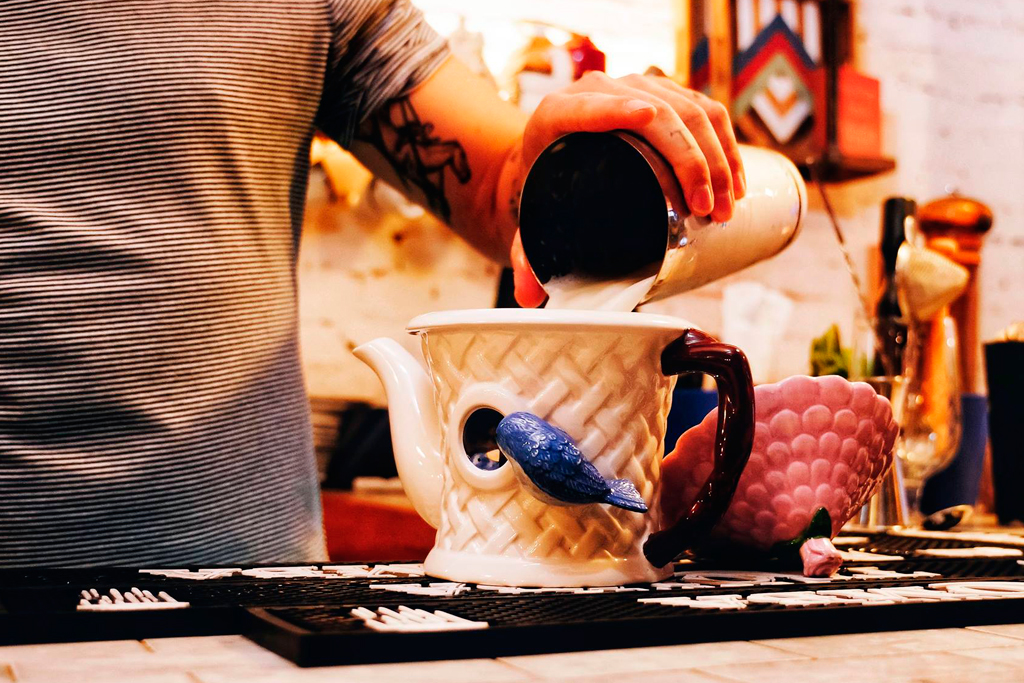 Perched at the sleepier end of the Queen West strip, DUMBO SNACK BAR is a newish addition to Parkdale. Wooden tables fill the slender room, which is dominated by a bar and soaked in ambient red light. (In warmer temps the capacity doubles, thanks to the back patio.) Owner Nick Peach tends to the drinks while chef whips up shareable eats. Foodwise, faves include the namesake dish, four-hour braised short rib with cheddar, fried onion and house chipotle mayo. And the pork belly bao: marinated and braised pork belly in buns with pickled carrots and hoisin sauce. A concise list of cocktails riffs on classics, though more fun is to be had with the teapots for two. The Photobomb — a gin-based punch with honey, lemon, herbaceous Benedictine and Prosecco bubbles — arrives tableside in a rhino-shaped vintage teapot. 1704 Queen St. W. 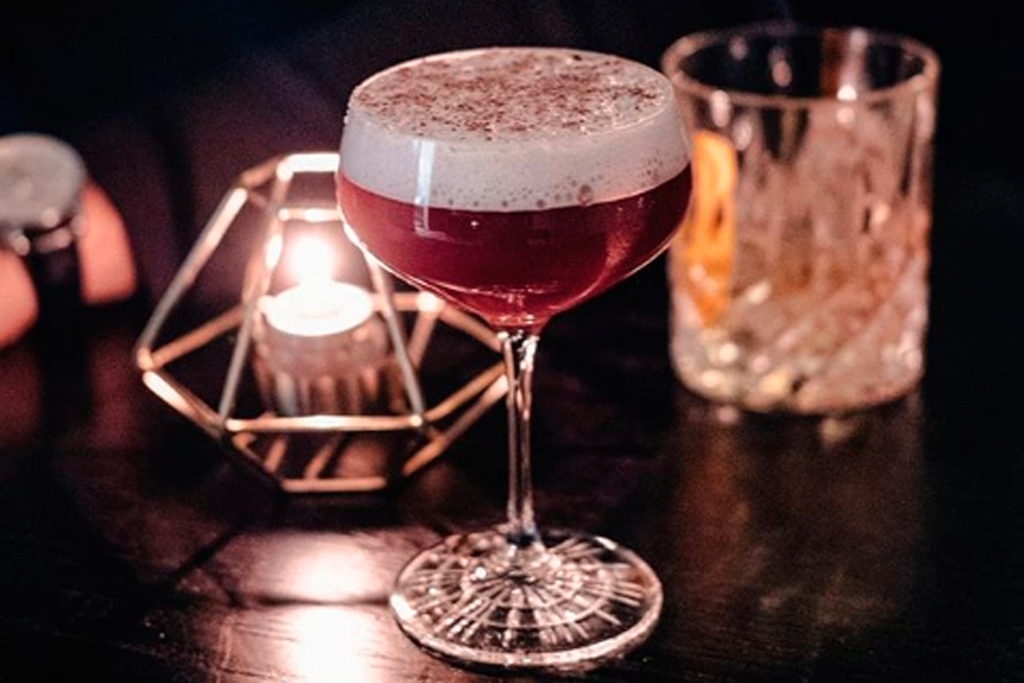 FOUNDER BAR has swiftly knit itself into the fabric of the Little Portugal bar scene. The bar team is comprised of some of Toronto’s biggest names, including co-owner Brad Gubbins, and Sandy De Almeida. A collaborative cocktail menu reaches far past the 100-libations mark, with the Flying Scotsman — a duo of scotches matched with pear and vanilla — counting as a favourite. The attention to detail extends to the food. Since day one, the green curry–spiced fried chicken with toasted coconut and tom yum sauce has had no problem wooing the hungry. Just as fun are the pho-tatoes, a charming mash-up of pho and poutine, jazzed with mozza, braised beef and pho broth gravy. With a sophisticated space painted in rich jewel tones acting as the backdrop to all the action, this is indeed a gem. 1282 Dundas St. W. 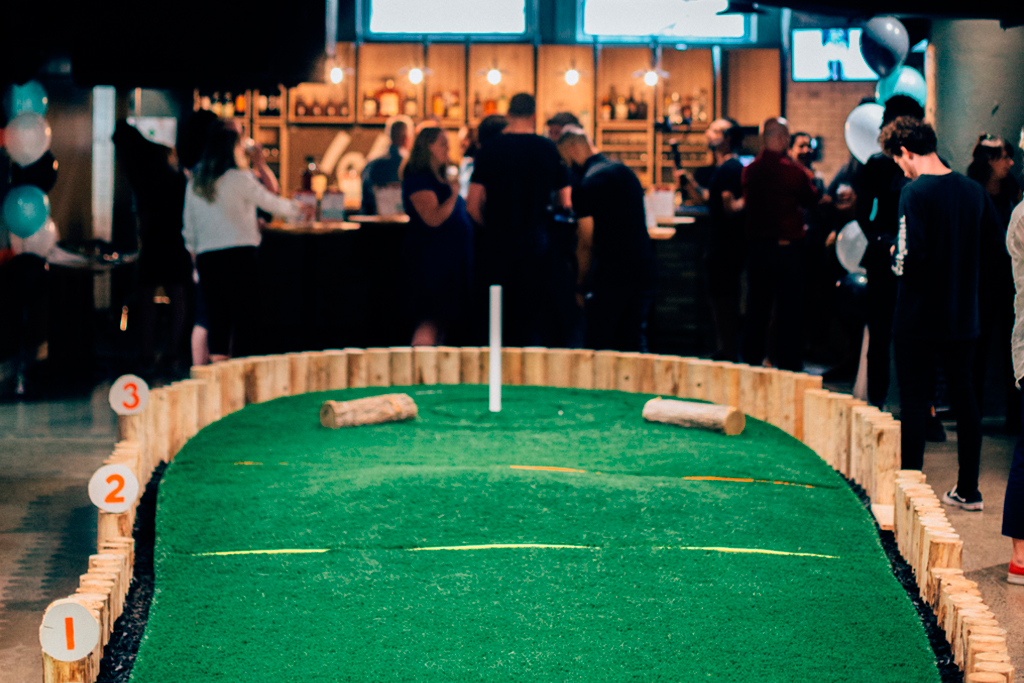 The ninth track of the course at Lob

Ever since Track & Field hopped onto the bar scene, Toronto’s night owls have been pretty keen on game bars. Now LOB has joined the coterie. Set in a 10,500-square-foot space in the east, this beastly venue straddles the line between beer hall, restaurant and bocce ball course. Well, we should say bocce-slash-golf course, as Lob opted to spruce up the game a bit. Balls are, yes, lobbed down a nine-court indoor course that pretends that Mother Nature has had her way in its creation, boasting hills, curves, etc. When it comes to beverages, a spotlight is shone on craft beer that was birthed east of Yonge. Think: Saulter Street, Muddy York and Radical Road. Additionally, there’s a restaurant proper dubbed Track 10 (har har), which dishes out sports bar–style grub that will satiate amped-up players. A highlight is the house-made porchetta on focaccia with allspice jus. 100 Broadview Ave., lower level 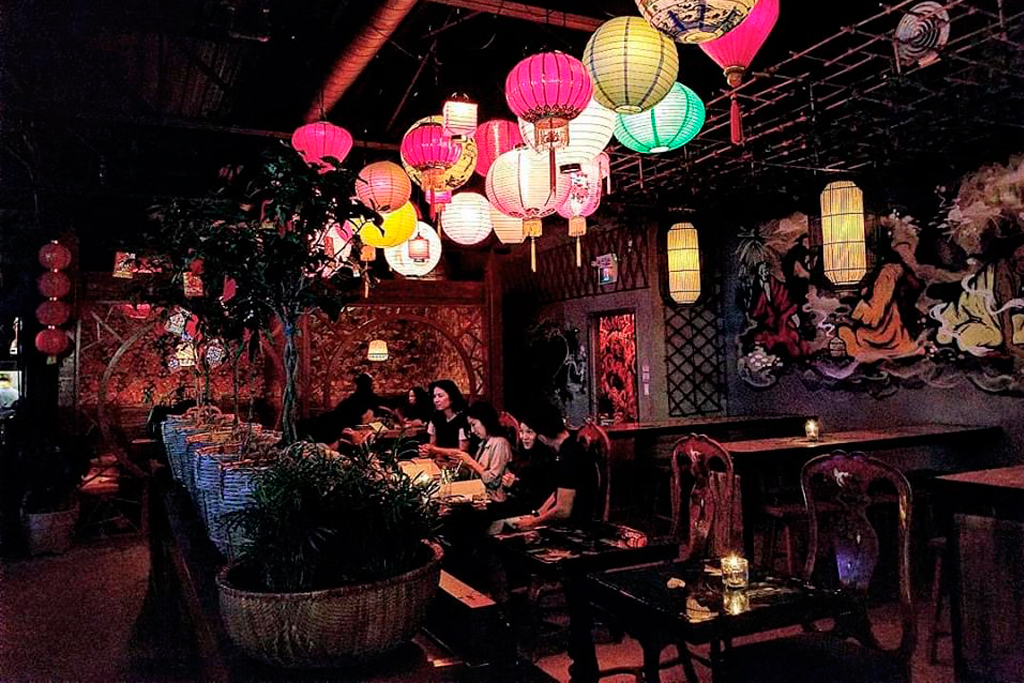 The interior of Big Trouble

Grabbing its name from the classic martial arts flick, BIG TROUBLE is a Chinatown bar that promises the 20-something set a good time. Sibling owners Andrew and Christine Pham wanted to properly celebrate the hood they grew up in; multicoloured lanterns dot the room, red drapes decorate the windows while a dragon oversees the bathrooms and carved wooden partitions frame booths destined for larger parties. Suck back ginseng Manhattans or their nifty bottled house mixes celebrating baijiu — Chinese grain liquor. Those keen to eat best arrive earlier in the eve. Crunchy bang bang shrimp come doused in a sweet and tangy chili sauce while spicy ginger butternut squash fills house-made potstickers. This is a party. 460 Dundas St. W. 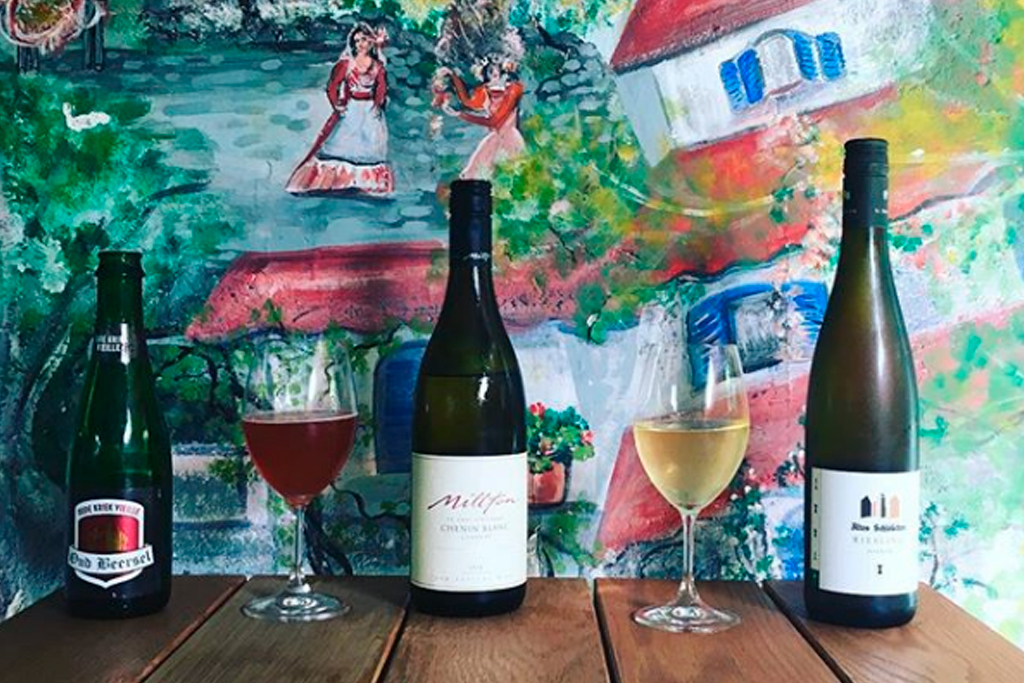 FOR THE WINE LOVERS

Bloorcourt’s PARADISE GRAPEVINE steps into the former home of Greek diner Menalon, and it comes to us courtesy of two Bar Volo vets. Christian Davis and Dave Everitt are pretty serious about their wine and beer offerings, with a carefully considered beverage menu that doesn’t care about labels (natural, organic, whatever) and absolutely does care about deliciousness. Here, the magic hour descends between 5 to 6 p.m. daily, with wine poured for a cool $9 a glass and beers a chipper $6. Bites are perfect for the nibbling type with offerings like semi sun-dried tomatoes, marinated artichokes and a meat and cheese plate. 841 Bloor St. W.

TOP DRINK: Cabernet Franc from the Loire Valley
TOP BITE: The cheese plate
FUN FACT: They are having a lasagna pop-up on Valentine’s Day