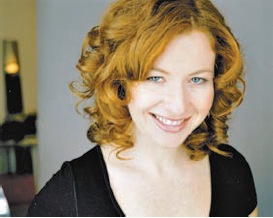 TURNING 30 TERRIFIED Oonagh Duncan. To elevate her anxiety, she ventured all across Toronto, tape recorder in hand, seeking solace in the company of others about to turn 30. She realized she wasn’t alone in her concerns.

The result of her exploration was Talk Thirty To Me, an original verbatim play, which has developed a cult following.

“I took exactly what they said, verbatim, and put it into a play, editing it to create composite characters,” says Duncan.

She says she interviewed everyone from established fashionistas to newly arrived refugees, and wasn’t afraid to ask controversial questions, from cybersex to cellulite and death.

The play received praise from the Globe and Mail, Rogers TV and the Calgary Sun, which encouraged her to write her most recent play, Talk Sixty To Me. This time Duncan spoke with Toronto-area 60-year-olds about both the tragic and comedic effects of reaching that new stage of life.

“A lot of the parents of the people I interviewed [for the first play] said, ‘Please, you have to do one about us! We’re going through something here, too.’”

The play was a part of the 2008 SummerWorks Festival and was directed by three-time Aurora Award-winner Philip Adams. The cast comprised Cayle Chernin (Little Mosque on the Prairie), Allan Price (Queer as Folk), Andrew Scorer (Due South) and Bonnie McDougall (CBC’s A Christmas Carol).

Duncan says that she has always been artistic. Her drama teacher at Holy Trinity School, Ms. Greenway, had a positive influence on her career, and she says she was encouraged to develop creative ideas beyond the classroom.

“She was young and funky, but she was also excellent in giving students authority,” Duncan recalls. “She was really there as a facilitator.”

Duncan’s next verbatim project, The Trial of Jeremy Hinzman, is already underway, but is written for the radio. It is based on the trial transcripts of Jeremy Hinzman, an American Iraq War resister and one of the first people to have his refugee status application rejected in Canada. Production will begin in summer 2010.