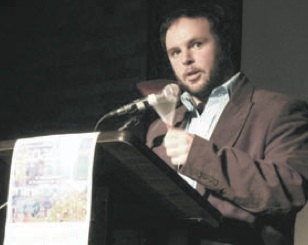 OVER THE PAST decade, Matthew Blackett has been making a career of using downtown Toronto as his muse.

While working as art director at the Hockey News, Blackett self- published and drew m@b, an autobiographical comic strip about life as a twentysomething living downtown that ran in Eye for four years.

He also co-founded and publishes the National Magazine Award–winning urban social advocacy magazine Spacing, which evolved out of a downtown campaign against a city ban on postering. But despite his heavy involvement in the downtown core, Blackett still has his Bayview neighbourhood on his mind.

“I still have a really strong connection to [that] area,” Blackett says. “I really want to see that strip all the way up Yonge succeed. There are a lot of really good aspects in that strip, and all those condos there are adding a lot of people and vibrancy into that neighbourhood. It would be great to have wider sidewalks and more cycling up there. That seems to be lost from my time, to some extent.”

While drawing a monthly comic for the student newspaper and editing the school’s yearbook, Blackett played striker on the soccer team.

After graduating from Humber College’s journalism program, he began working at the Hockey News where he found himself taking passes from Wayne Gretzky.

“I got to do this media event where I represented the Hockey News for a shootout and it was during Wayne Gretzky’s induction into the Hall of Fame,” Blackett says. “I was actually getting passes from Gretzky. I was beside myself.”

While hobnobbing with hockey stars, Blackett was also fully engaged with promoting his self- published comic.

“When I started my comic book in 1998, I wanted to share it with my friends and I wanted to share some of their talents as well,” he says. “I was finding that everybody in the arts community was really interested in the other arts and that kind of hearkens back to my days at Earl Haig where you would have gifted athletes being really good artists and vice versa.”

Initially intended to be an advocacy magazine, Spacing has turned into what Blackett describes as, “a somewhat decent, successful business.” Now in its fourth year, Spacing continues to grow, and Blackett clearly enjoys being his own boss.