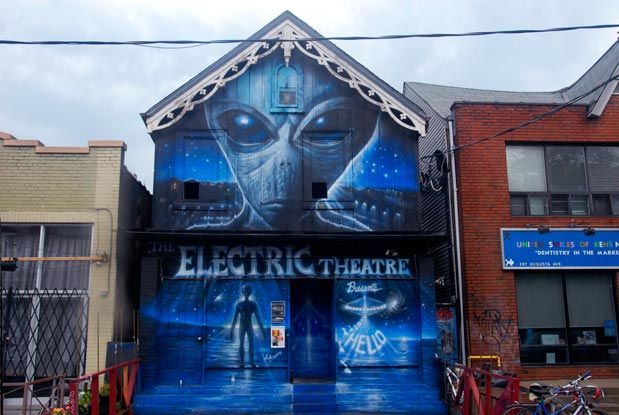 As a former die-hard X-Phile, I wanted to believe in Hello, the extra-terrestrial electronic extravaganza playing in Kensington Market. Its story, about an alien enthusiast who has to deal with a real alien invasion, seemed like it had Mulder and Scully written all over it. Heck, even its digs — the newly-minted The Electric Theatre — has a gigantic alien airbrushed across it. The truth (of a good show) had to be out in there. Somewhere. But, it wasn’t.

Hello is pretty ambitious and pretty weird. It’s bizarre enough that it’s an original electronic musical about an extraterrestrial invasion. But throw in a half dozen dancing, black-unitard-wearing “shadow people,” with one of them portraying the protagonist’s thoughts (who is aptly-named X) with ridiculous gusto, and, well, you’ve got yourself a smorgasbord of strangeness.

The plot is basically one of those “be careful what you wish for” stories: a group that likes to create fake crop circles gets a big surprise when a real alien invasion begins, first in China, then spreading to the western world, scaring the bejesus out of everyone. Throughout the chaos, upbeat dance breaks (again with those shadow people) and musical numbers are commonplace; unfortunately, most of the cast falters either due to poor acoustics or just feeble talent.

Kudos must be given to writer and director Mandy Leon for creating such an ambitious project, though. Her passion is evident throughout the show. Whether it’s the use of visual aids — like a news ticker or the illuminated HELLO sign that, at one point, changes to HELL, because it breaks loose — creating hypnotizing lighting that would make any raver feel at home, or having the cast members live-tweet, it’s evident that Leon made efforts to create a unique production. And bagging a BlackBerry deal — which provided phones for the show — is pretty genius too (though the company probably didn’t hesitate for the free publicity).

However, because it’s such a wide-reaching spectacle — is it a musical? A concert? A rave? — the production as a whole is weak. Though it’s surely commendable to run a show for 10 straight weeks, I can’t help but think that Hello would be better off suited for a Fringe run, or a workshop, so it can find its voice and story. (But would a Fringe show allow a 20-minute intermission where guests can peruse the eccentric artwork that’s heavily displayed throughout the theatre? Probably not).

There’s a scene from the first X-Files movie when Mulder asks Scully: “After all you’ve seen, you can just walk away?” Scully replies, “I have. I did. It’s done.”

That pretty much sums up my feelings for Hello, the original electronic musical.