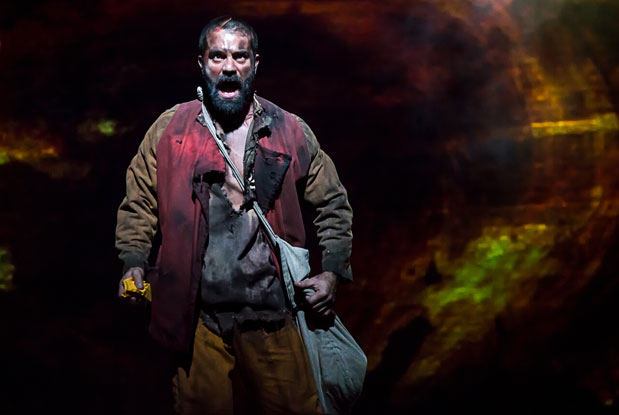 Opening night, news vans were parked outside Princess of Wales Theatre three hours before show time. Glamour and cameras crowded the entrance as the hour approached. Les Misérables! Again? Isn’t that so 25 years ago?

And yet, themes from Victor Hugo’s epic story — the Law versus the People, the 99 per cent versus the powers that be — continue to be reflected in the news. Do you see a parallel between the barricade in Les Mis and the G20 barricade? Do you hear the people sing, “Idle No More?” Even if not, the music keeps the audience coming back.

At the opening strains from the 16-piece orchestra, the eager crowd erupted into applause. And the voices did not disappoint. Ontario’s Ramin Karimloo as Jean Valjean is worth the price of admission. His commitment to the role, in acting as well as singing, never wavers. His voice has a delicious tone, pure in the upper register and wildly dynamic, but always controlled. He’s only 35 years old, but Karimloo ages Valjean well over the course of the show. He made his debut in London’s West End playing other roles in Les Mis, and he stayed on there playing the Phantom in The Phantom of the Opera and the sequel, Love Never Dies.

Earl Carpenter solidly fills the crucial role of Javert but occasionally presents bits of narrative with less clarity than desired. Genevieve LeClerc as Fantine has a strong voice but doesn’t connect enough emotionally to convey the tremendous pathos of the character. This is in part because of the pace of her songs which, along with some other sequences in the show, is so swift that I had visions of directors Laurence Connor and James Powell eyeing their stopwatches in the wings.

Granted, there is a huge amount of story to be told. While it’s impressive how much of Hugo’s magnificent 1,500-page novel gets incorporated into this narratively dense musical, the relentless storytelling is hard to decipher on first hearing. Although you could enjoy the stirring music and its lush counterpoint without understanding all the details, the better you know the story, the more you will get out of it.

The Bishop is played powerfully by Andrew Love, whose resonant baritone voice I’d like to hear more of. Melissa O’Neil’s Eponine earned such sustained cheers that the guy manning her spotlight could have gone out for a smoke. Samantha Hill, returning to Canada after her Broadway debut as Christine in The Phantom, brings energy to the role of Cosette. Gavroche, ably played by 12-year-old Aiden Glenn of Burlington in his debut role, is more like a kid than the “mascot” we have seen in earlier stage productions. Lisa Horner got applause with her first line as Mme Thénardier. Overall, her tone is more sinister than comical. The strength of Cliff Saunders, more comical than sinister as Thénardier, is his nimble physical comedy.

A distinctive feature of this reimagining of the world’s longest-running musical is the physicality of the performances — sometimes enhanced by vivid lighting and sound (lighting design Paule Constable; sound design Mick Potter) — which evokes, more than previous productions, the brutality of the epoch and the story (fight director Joe Bostick; fight captain and dance captain Ben Gunderson; musical staging Michael Ashcroft).

There is an old-school feel to this production, direct and gritty, not glossy or even spit-shined. There is no gigantic Lazy Susan rotating the set and actors, which was a pivotal feature of the previous productions. Now the performers are the spectacle, moving under their own steam; the set, even at its most impressive, never upstages them.

It is a painterly set, incorporating images inspired by Hugo’s own paintings. Space is used to extraordinary effect, sometimes leaving much of the stage empty like a Degas painting, sometimes jammed with detail like a Delacroix painting. Other times, the scene is filled with a city block of 19th century Paris that’s high enough to give you vertigo. But surely the most memorable feature of this production is the mercurial backdrop, a kaleidoscopic impressionist painting that never distracts from the performance but which, on at least one occasion, I would have applauded if I hadn’t been scribbling this note (set design and projection artwork Matt Kinley). It draws you deeper into the show you thought you knew.

The three-hour performance went by too quickly, and the vast ovation showed I was not the only one who wished it would start again from the beginning.