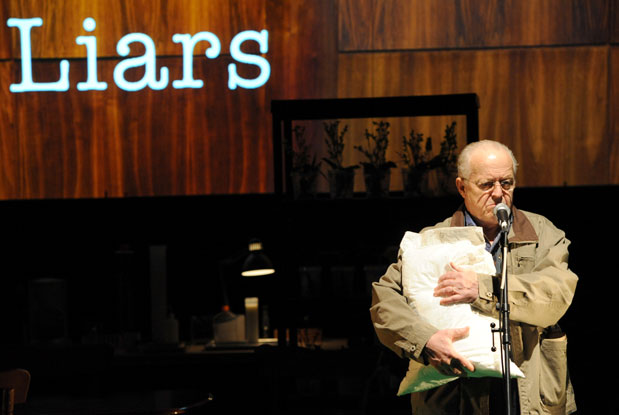 Seeds, which officially opens at the Young Centre for the Performing Arts on Thursday, is not typical theatre — it’s documentary theatre. Montreal playwright Annabel Soutar created her script using exclusively the words of real people, including herself (portrayed by Liisa Repo-Martell). The dialogue is taken verbatim from court transcripts, news broadcasts and recorded interviews.

Soutar has teamed up with Toronto director Chris Abraham of Crow’s Theatre and star Eric Peterson to tell the epic story of Saskatchewan canola farmer Percy Schmeiser versus that notorious corporate superweed Monsanto. The resultant concoction of science and fury is like David Suzuki meets Jerry Springer. Is it theatre? Is it dramatic? Yes and yes. The Michael Young theatre was packed last night. The Saturday preview was sold out, as are opening night and the final three performances.

The broad stage is set to take you seamlessly — without scene changes and prop shuffling — from biotech lab to farmhouse to the Supreme Court to press conferences around the world. Five of the seven actors play multiple roles, often playing cross-gender but without confusion or parody. To help the audience keep on top of the frequent and sudden shifts of speaker and location, (transitions typical of screen documentaries but rarely attempted on stage), names, dates and images appear on a panoramic video screen behind the actors, providing clarity without distraction.

It’s easy to see Goliath (Monsanto) as a monster, but this David (Schmeiser) may not be a saint. An audience is often set up to root for the underdog, but Soutar takes a look at the underside of this “dog.” She interviews his neighbours and colleagues, some of whom claim he is an attention seeker and a liar. But how many of his detractors have been wined and dined or even employed by Monsanto?

As Soutar says in a Q&A after the show, alongside the director and most of the cast, each person in the audience will have to come to their own conclusions, and because of the nuances that theatre allows, a person could come to different conclusions on different nights.

Seeds is about more than the guilt or innocence of one man. It is about where the rights of farmers end and the rights of corporations begin; it’s about wondering how an individual can get a fair trial when targeted by a corporation with the wealth and power to dominate the media, to influence government policies, to sideline undesirable research, to potentially intimidate and bribe scientists, judges, and entire towns and communities. It’s also about addressing the fact that all of these issues are too complex to be quickly sorted out in a news story or even in a two hour documentary play.

But since the play is centered around Percy Schmeiser, we asked Soutar, after her years of research and interaction with the farmer, what she thinks of him. “I don’t like to answer that question. What do you [the audience] think?” she asks. Then she adds, “I will say this. My opinion of him evolves.”

Cast members say they too discuss the implications of various facts and contradictions on a nightly basis. It is clear they are all deeply involved in the material far beyond the performance.

As for Soutar, she has this message for her audience: “Go forth. Do some research on your own.”