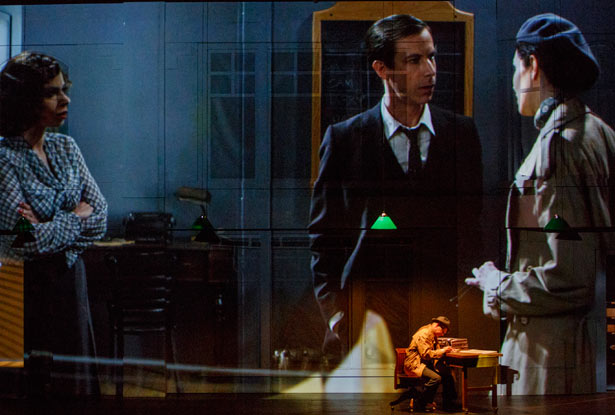 Keanu Reeves recently produced a documentary featuring a bunch of well-known directors arguing the merits of traditional filmmaking versus the modern, digitized way. Some of these filmmakers get pretty emotional when they concede that their art form is changing into something bigger, and possibly, better. Tear the Curtain!, a play about the war between film and theatre in the ’30s, proves that concern over film’s place in our culture is nothing new.

Tear the Curtain!, which made its Toronto debut last night for Canadian Stage, is one mind-trip of a play. It’s a world in which warring mobsters — decked out in fedoras and Tommy guns — fight over their respective entertainment industries: movie houses versus theatres. Movies represent the new world of storytelling — fast and empty. Theatre is, of course, the old way: present and provoking. And, seeing as the play attempts to examine the resonance of each art form, it’s only fitting that the production is a mix of film noir (yes, projected onto a big screen) and live theatre.

Alex Braithewaite (Jonathon Young, who also co-wrote the play) is caught in the middle of these two worlds. Braithwaite, a theatre critic, finds himself in a movies-versus-theatre turf war when he attempts to discover the whereabouts of the avant-garde theatre director Stanley Lee (James Fagan Tait). In typical film noir fashion, Braithewaite becomes involved with a femme fatale (Laura Mennell), all the while ignoring the charms of his loyal sidekick, and typical Girl Friday, Mavis (Dawn Petten).

For most of the play, Braithewaite spirals into a theatrical fantasy, often breaking the fourth wall, as he explores both the movie world and the theatre world in a very visceral Theatre of Cruelty-esque way. Eventually, his sense of self collapses in a seemingly murderous fashion, but things eventually wrap up. Sort of.

If it sounds confusing, it is. It’s a long play (2.5 hours) and there’s a lot going on. There are so many illusions happening that even David Blaine would be a bit dazed.

Visually, the play is stunning. Every detail, from the set to the costumes, is perfectly Hitchcockian. Watching the action transition into film was, initially, mesmerizing, but eventually, I thought there were more “movie moments” than live theatrical ones.  Of course, that’s probably not actually true, since the play doesn’t favour one medium over the other. It attempts to blend the dynamic art forms, showing us why they both matter; how they can eventually coexist in harmonious artifice.

While I was enrolled in an acting conservatory, students were immediately divided as “theatre” or “film” actors, and they were segregated both professionally and personally as such for the remainder of our time at school. I often thought: why do we need to choose one or the other? It’s not like one is better. Can’t we just discuss this?

Tear the Curtain! is the conversation I never had.