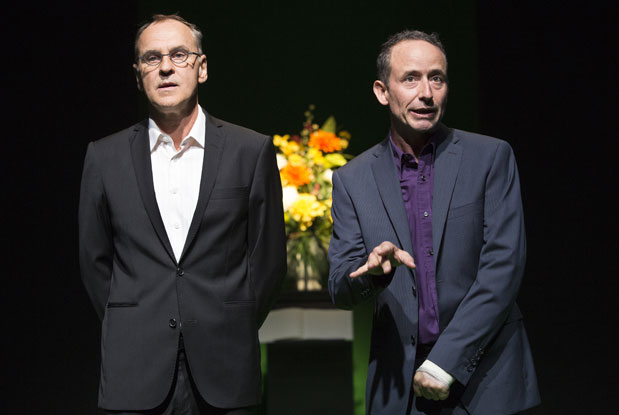 If you are looking for a piece of theatre that is fun and unpretentious, you can’t do better than The Best Brothers, Daniel MacIvor’s latest play, now in its second week at Tarragon Theatre. When a couple of very different brothers learn their mother has died, they have to find a way to deal with each other, and her dog.

You can tell it’s a comedy because the death comes at the beginning rather than at the end.

MacIvor wrote this play for Stratford, where it premiered last year to great acclaim. He wrote it to be performed by himself and fellow Nova Scotian actor John Beale. Largely unchanged from last year’s production, the Tarragon remount features the same cast and the same director, Stratford’s Dean Gabourie.

As Canadian playwrights go, Daniel MacIvor is a winner: Dora, Governor General, Siminovitch and other awards. He is currently a playwright-in-residence at Tarragon, which has produced five of his other works in previous years. Meanwhile, Beale, whose training and career have taken him far and wide, is making his Toronto debut at Tarragon. You’ll be seeing a lot more of him around Toronto in the near future.

From beginning to end there is clarity — in delivery of dialogue, delineation of characters, development of story and lighting (lighting design Itai Erdal). Transitions of scene and character are smooth and economical, sometimes with subtle music to colour the mood (composer Jonathan Monro).

The brothers are at odds from the outset. Their debates about how to word the obituary and who is delivering the eulogy are hilarious but believable. Director Gabourie choreographs the conflict between the brothers (and the affection, such as it is) in a way that never feels staged; whether verbal, emotional or physical, the interactions are natural and palpable.

What is best about The Best Brothers is that the seasoned actors have a rapport with each other, and with the audience, such that they just live the characters’ lives without ever seeming to work for a laugh or to set up an emotional response. Although MacIvor does have brothers, as he explains in the post-show talkback (taking place all this week), the most autobiographical parts of the script are the tales of the dog, which shed light on each of the characters.

You don’t have to have a brother or a dog to understand that people have strong and sometimes mixed feelings about their siblings and pets. More than that, this play is about the individuality of each child-parent relationship and about the different ways in which one can respond to death. MacIvor approaches the subject humorously and thoughtfully, without resorting to contrived wordplay or convoluted philosophizing.

This is not a play of extremes — perhaps because MacIvor wrote it with a Stratford audience in mind. Although The Best Brothers may not give you that big cathartic sob or gasp-inducing plot twist, it is funny and reflective, with poignant moments of self-awareness and sometimes a little bit of other-awareness.