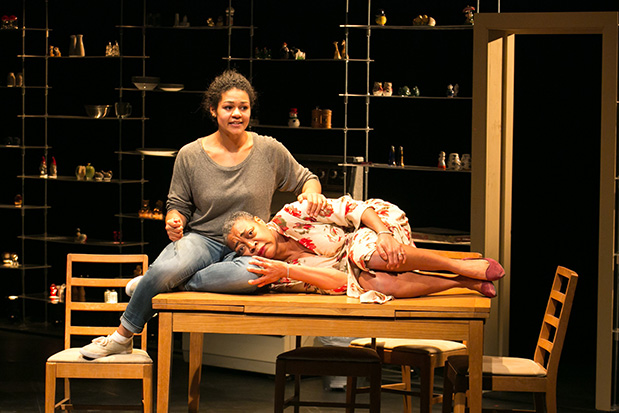 Art isn't always suppose to be easy. That's my first and most powerful thought after witnessing the Factory Theatre's latest offering The Gravitational Pull of Bernice Trimble, which opened Nov. 7. Indeed, at times the best art pokes and prods us into going somewhere deep and dark and makes us deal with it in whatever way we see fit. Hopefully, if it  works, these moments are accompanied by some brief glimpse of clarity or enlightenment. And for that alone I can recommend this powerful work by playwright Beth Graham.

The play is set in a kitchen, the epicentre of modern family life and focuses on matriarch Bernice Trimble, played most capably by Karen Robinson. Her husband has recently died and her three adult children display some well-worn character traits that are easily relatable to the audience. Bernice's middle child, Iris Trimble is the key. Actor Alexis Gordon does a wonderful job bringing this character to life. She is joined by older sister Sara played by Lucinda Davis and the younger stoic brother Peter played by Peyson Rock.

The plot is tricky, as Iris alone spends a good portion of the play talking to the audience in the present and narrating a series of flashbacks to when her mother develops Alzheimer's disease and how her family deals with a very difficult situation. The only set changes between present and past involve salt-and-pepper shakers. It's fun and it works. Gordon is astonishing in her commitment to the role. Both her and Robinson exemplify the idea of actors being brave, seizing a role and committing to it on a deep and emotional level. The result is moving to say the least.

The play is far from a simple exploration of a disease that pervades society. Graham also does a fine job of tackling the complementary thorny issue of assisted suicide. She doesn't take sides in the debate, even though she crafts the character Bernice into such an appealing person. We all love her at the end of the play. We love her hearty laugh. We love her wisdom. But, that doesn't make it okay. There is still a strong lingering doubt over her decision and whether or not it is a selfish one.

When one gets a certain age, thoughts of how we want to go to that great beyond are natural. We worry about how our loved ones could possibly carry on without us. We want to be brave. We want to go with dignity, yes. But at what cost to others? As this play illustrates wonderfully, these are most complex issues and profoundly personal ones.

Like the best plays when dealing with weighty topics, there are a few smiles and laughs along the way to lighten the mood. I'd prefer a few more. I'd even appreciate an intermission, though with the short 100 minute run time, I get the problematic nature of the request. But all this emotional stuff is exhausting.

The play is a co-production of the Factory Theatre and Obsidian Theatre and is directed capably by Philip Akin.The Gravitational Pull of Bernice Trimble runs until Dec. 1. For tickets and information go to www.factorytheatre.ca.