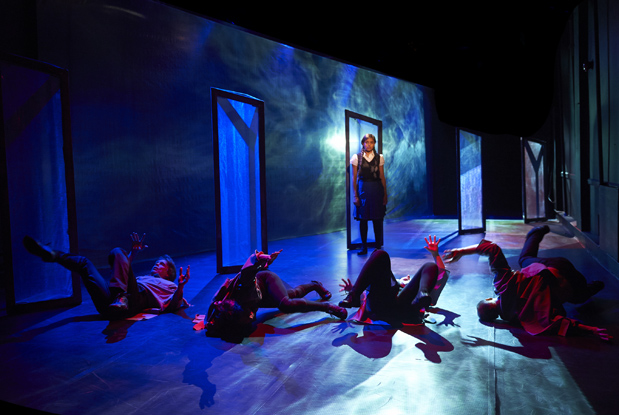 If David Suzuki and Tim Flannery collaborated with Cirque de Soleil and the Fifth Estate, they might come up with something like Theatre Gargantua’s new drama The Sacrifice Zone, running at the Factory Studio Theatre until Nov. 30. Toronto’s Theatre Gargantua is a hearty theatrical feast—contemporary, multi-disciplinary, multi-media. In collaboration with Aussie/Brit playwright and human rights lawyer Suzie Miller, they have developed a challenging show that examines how much people can sacrifice for justice, their families, their jobs, and other sometimes conflicting priorities.

Directed by Jacquie P.A. Thomas, Theatre Gargantua founder and artistic director, the show holds personal connections for everyone involved in bringing it to the stage because Gargantua’s meticulous production “cycle” began in the spring of 2012 when the company got together and told stories of injustice relating to their own families and experience. These stories furnished the starting point for Miller’s script.

The story, which seamlessly incorporates mystery, social commentary, and philosophical dialogue, is conveyed through a collage of dialogue, movement, acrobatic dance and image projection. It’s not one of those things you watch and whisper to your companion, “We could totally do that." The collective experience and accomplishments of Miller, Thomas, dramaturg Bruce Barton, the ensemble and the rest of the creative team is astounding.

The experience offered by The Sacrifice Zone is thorough. While still in the lobby you hear the ethereal but contemporary world music of John Gzowski (sound designer and live foley) enticing you into the mysterious performance space where you are asked to follow a narrow carpet to your seat. The back wall is a very wide projection screen placed at a steep angle away from the audience making the stage into a triangle. The triangle motif is repeated in five uniform but asymmetrical frames, each with a translucent pane like a shower door, which are imaginatively employed as the dynamic and flexible set (set design by Michael Spence, also a cast member and associate artistic director of Theatre Gargantua). These frames, one for each of the five cast members, are moved about fluidly to form doors, walls, furniture, school yard, or whatever a scene requires. Costume changes are likewise inventive and fluid (costume designer Sheree Tams).

Swirling light like aurora borealis projected on back wall, (lighting and projection design by Laird Macdonald), and chanting figures emerging from shadow and breaking into choreographed movement might provoke a cynical traditionalist to grumble about sound and fury signifying nothing, and maybe some acrobatic manoeuvre might make you think, “Now they’re just showing off," but from the first words the story is taut and emotional. The drama and tension builds for the whole 75 minutes.

Much is left to the imagination. No time, place or resource is specified, and although the story reflects, for example, ensemble member Ciara Adams’ (Laura) experience as a music teacher in Fort McMurray, it could be set in any number of places in the world where industry brings destruction along with prosperity. The basic premise is that, in a town built on resource extraction an industrial explosion kills a number of workers. The company wants to pay off the grieving families and get back to business, but as two individuals push for an inquiry into the accident that killed their spouses, the community becomes divided. The pair knows they “won’t be too popular” in the small town where their quest for justice, or at least an explanation, imperils thousands of jobs. Community tensions lead to shunning and bullying amongst the children of those for and against the inquiry.

Adults play the children effectively, with an especially powerful characterisation by Gargantua veteran Joel Benson as Sam. The various relationships depicted—mother (Michelle Polak) and boy; a couple newly in love; the shared pain of widow and widower—are intensely authentic. To illustrate the interplay between executives, workers for and against the inquiry, their families, and other community members, many characters are named or briefly presented but only a few are developed, each member of the tight and balanced ensemble playing numerous (mostly archetypal) roles.

The script does not pretend the issues are black and white. It is not a matter of singling out a bad guy to punish. In varying degrees, everyone is affected and everyone is implicated. One employee speaks of suing the company, another responds “We are the company” and argues that industrial destruction of the environment is the inevitable result of the consumerist lifestyle our society refuses to abandon.

Whether taken as entertainment or food for thought, The Sacrifice Zone will hold your attention.

Evan Andrew Mackay is a Toronto playwright and humorist who writes about culture and social justice. Find more of his writings at goodevaning.wordpress.com.