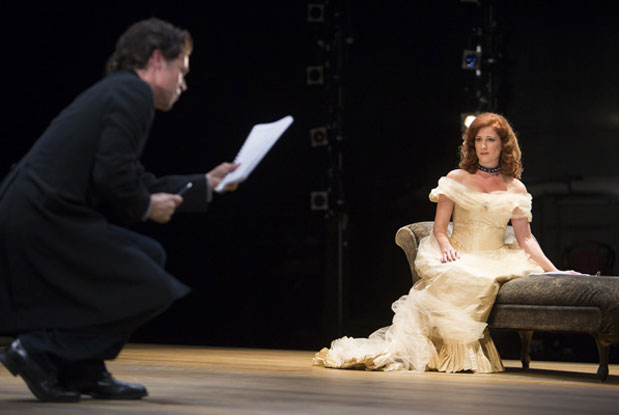 Casting Rick Miller in a Tony-nominated script that is America’s “most produced play” of 2013–14, the Canadian Stage couldn’t go far wrong, and it didn’t go far wrong. In Venus in Fur, Rick Miller — best known for his international solo hits (MacHomer, Bigger Than Jesus) — plays Thomas, a playwright/director who is struggling to find an actress capable of playing the sophisticated Wanda in his adaptation of Sacher-Masoch’s novel.

At the day’s end, amidst thunder and lighting, Vanda storms in; loud-mouthed, low-class and all “whatever!” — seemingly the least suitable of the three dozen actresses he has rejected so far. Dominating the role of Vanda is National Theatre School grad Carly Street, whose career has been prolific on both sides of the border. Last year Street made her Broadway debut in the Tony-Award winning production of Clybourne Park (America’s second most produced play of this season).

Venus in Fur is a sex-charged gender politics comedy bridging the 19th and 21st centuries. It’s like Oleanna meets Pygmalion meets Dan Savage meets bell hooks. In this highly self-reflexive play, Thomas wrestles with the importance of ideal casting, and indeed the hairpin turns that Ives’ script demands of the actors would quickly derail inferior performers.

Rick Miller, a polyglot who has performed his solo shows in a few languages, effortlessly switches between a number of accents. Street, too, volleys back and forth from one accent and persona to another. Both actors get the most out of the comedy and the drama, and they’re not shy about sex, but nothing is overdone. All three elements are in balance as Miller and Street, under the direction of the ubiquitous Jennifer Tarver, negotiate the treacherous dynamics within and between the two characters, and their 19th century alter-egos, like Olympic figure skaters in fetish-wear.

The play is self-consciously situated in an unadorned theatre space, and the 90-minute play is one continuous scene. Costume changes are done as part of the action, and lighting changes (except the lightning) occur only when a character hits a light switch. There is a gothic feeling to the lighting (Michael Walton), set and, of course, the costumes Vanda and Thomas put on to portray characters from the novel upon which the play and the play-within-a-play are based (Debra Hanson, set and costume designer).

There are subtleties in the presentation, such as the inconspicuous way in which Vanda winds up in the director’s chair, usurping the throne as if by accident, but the dialogue tends not to be subtle. A utility pole featured prominently on the stage is, to even a chaste and unimaginative observer, a phallic symbol. But at one point the crass actress snorts, “What’s this, a phallic symbol?”

Despite Thomas’s disdain, Vanda browbeats him into letting her audition. She flatters his writing and insists he read all of his parts without skipping ahead to hers. She pushes him: “C’mon! Get into it!” Gradually she starts directing him, coaxing him to use an accent. “Something continental?” he offers. “Ooh, ‘continental’!” she coos in admiration of his intellect. He doesn’t catch on that she’s playing dumb, even as she increasingly shows herself to be capable, persuasive and powerful.

Ives’ script, which Roman Polanski has just adapted to the screen, shows how much the themes that Sacher-Masoch wrote about nearly two centuries ago are still relevant today. Vanda, speaking as Wanda, says, “In our society, a woman’s only power is through men.” She goes on to consider how things will be different in a new day when women are able to express their authentic selves and find their own power.

With Sinead O’Connor currently schooling Miley Cyrus on the do’s and don’ts of girl power, is this journey not yet at an end? Let’s see what sort of scripts are getting Tony nominations in 2070.

So it’s relevant, but is it entertaining? Well, at the close of the performance, the opening night audience members leaped to their feet like their seats had caught on fire.