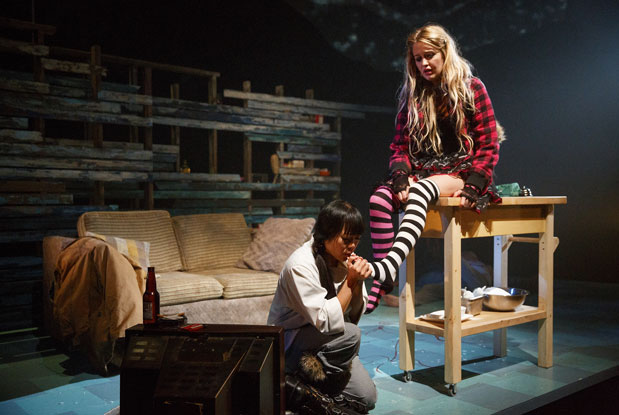 Sarah Berthiaume’s expansive and chilling drama Yukonstyle, currently having its English language premiere at Berkeley Street Theatre until Oct. 27, delves into a host of raw social issues that really hit home. And when I say “home,” I mean Canada.

The most intensely Canadian play you are likely to see, Yukonstyle is not sentimental or didactic; it is a deep gaze into the soul of Canada. And it’s not just for Canadians. It’s being staged this year not only in Montreal and Toronto, but also in Paris, Brussels, Innsbruck and Heidelberg.

Berthiaume takes us to the Yukon, where she plausibly assembles four characters: Garin, whose native mother disappeared from Vancouver in the ’80s when he was two; his amiable but enigmatic French-Canadian father, Pops; his boisterous female roommate, Yuko; and the white Anglo Kate, a forlorn, rootless, rebellious 17-year-old who dresses like a “Harajuku girl” (Gothic Lolita style) and who has hitchhiked into Yuko and Garin’s world. The contrasts shown in their four perspectives demonstrate misunderstandings that have been grinding in Canada’s machinery for centuries.

The action begins with Garin and Yuko entertaining themselves with a guitar and a TV as the news gives perturbing details of the unfolding Robert Pickton trial.

Garin is furious when Yuko protectively brings Kate into their home to stay “as long as she wants.” Kate stakes out the couch, raids the fridge, whines for beer and, unaware that the fuming Garin is half-native, confidently blathers about what “a guy on the bus told me about Indians.”

As Garin silently struggles with disturbing questions about Pickton’s many victims, Kate, who is “into serial killers,” pontificates about their methods and supposed motives with a tone more appropriate for celebrity gossip.

The portrayal of the ignorant white person showing up uninvited and spouting hurtful drivel is not a straw dog; it is not difficult to sympathize with Kate, who is to some degree an everyman character, neither worldly nor malicious but merely ill-informed and self-indulgent. Sometimes what makes you cringe about things she says is remembering that you said similar things in your youth. The commitment of this outstanding cast is exemplified by Kate Corbett (playing Kate), who broke her arm offstage during a preview performance and continued the show without interruption.

Yuko, played by the versatile Grace Lynn Kung (Kim’s Convenience, InSecurity), convincingly captures the spirit of someone who has broken away from Japan’s conformities and has become seemingly un-Japanese, outspoken and rowdy, but still responsible and caring. As is often observed, it is the conduct of the immigrant that best demonstrates “Canadian values.”

Pops is played superbly by Francois Klanfer, and Ryan Cunningham packs in the complexities of Garin like an overheated pressure cooker.

Interweaving multiple perspectives, issues and implications, the material demands a lot of the audience’s attention, and occasionally the presentation adds even more strain (a TV report competing with dialogue, or three characters giving a harried narration of passing weeks). But this is not light entertainment, and concentration is rewarded. Aspects of the play that I didn’t get at first gradually began to make sense over the course of the 95-minute performance and into the next day as I thought about it.

Under the direction of Ted Witzel, the lighting (Bonnie Beecher) and set (Gillian Gallow, also costume designer) — which whisk us convincingly to numerous settings — would be worthy of a separate review, so you’ll just have to see for yourself.

Packed with Canadian context but devoid of cliché, Yukonstyle would be compelling fiction, yet much of the content is taken from too-soon-forgotten news reports and too-readily-dismissed police investigations.

This play is an insightful consideration of fundamentally Canadian concerns. Sarah Berthiaume, not yet 30, is going to be a name long remembered in English and French theatre, and probably not just in Canada.