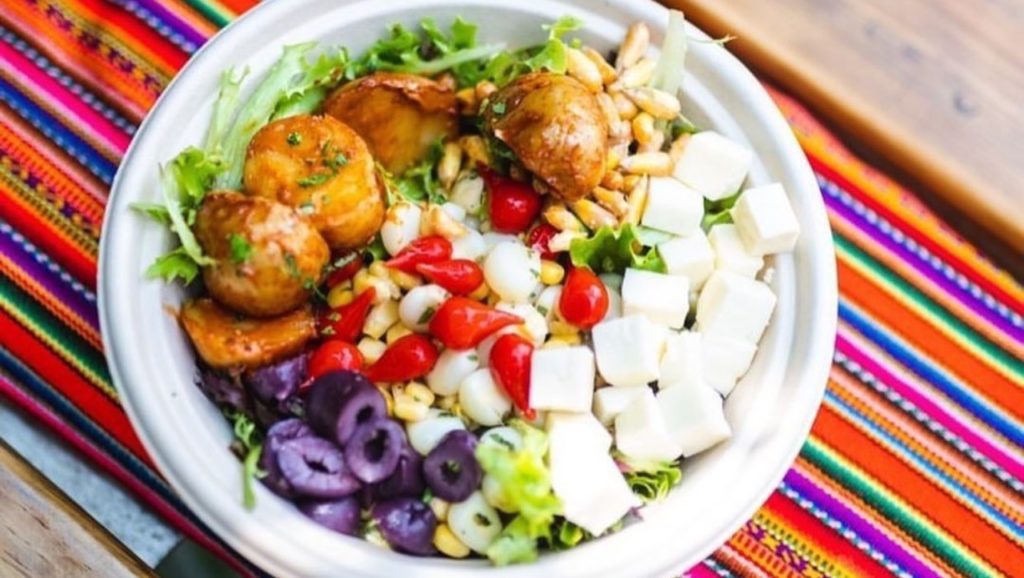 Brasa Peruvian Kitchen is all set to open in First Canadian Place after waiting months for provincial restrictions to lift.

Though this was supposed to be the Peruvian-inspired restaurant’s first location, it will now be the third to open in a four-month timespan. Brasa Peruvian Kitchen is owned by Michel Falcon who, although not new to Toronto’s food scene (he’s also behind Baro Restaurant and Petty Cash), wanted to do something that would pay homage to his nationality.

Falcon says Peruvian food is “phenomenal” and yet, while everyone is familiar with Italian, Greek and Japanese food, not as many are familiar with Peruvian delicacies. That’s why Falcon came up with this “gateway” into the culture. He is very clear to state that they do not serve Peruvian food, but rather just add Peruvian flavours to traditional salads and bowls.

These flavours stem largely from the use of peppers. Brasa leverages three of the five staple peppers of Peru, including the aji Amarillo (yellow chili pepper), aji panca (pink pepper), and rocoto.

“The thing that’s very unique about Peru,” says Falcon, “is that they have ninety different microclimates in the country. That means they can grow things that other countries simply cannot. So, you’ve got flavors from the mountains, the ocean, the jungle, with all this different soil. That’s where these peppers come from.”

Other Peruvian ingredients include golden beets and toasted corn. These are included within the bowls and salads alongside recognizable menu items like animal and plant proteins, root vegetables, and grains.

The menu was designed by Peruvian-born Chef Guillermo Russo and Michelin-star chef Jose Luis from New York. Falcon additionally enlisted the help of two Toronto dieticians and nutritionists to audit the menu for bloating and micronutrients. It was important for Falcon to create foods that made a comfortable experience for the customer without taking away the great taste.

Next week, Brasa will be adding stickers to their environmentally friendly containers which will attribute a fun fact to whatever food you decide to include in your bowl. “That’s how we’re going to do storytelling through food,” Falcon says.

Brasa Peruvian Kitchen is located at 297 Campbell Avenue, and as part of Kitchen Hub at 234 Parliament Street. The First Canadian Place location will be opening in early November and will be the restaurant’s flagship location.

Brasa’s Campbell location has a small weather-permitted patio with wooden picnic tables. While the other two locations do not currently have dining space, Falcon says the plan is to open five more stores in the GTA which will have seating of up to 20 people.