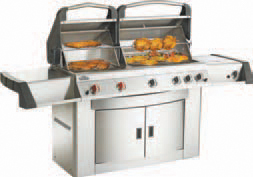 IT’S THAT TIME of year again, the sun is shining, the grass is green, and it’s time to gather friends and family for a good old-fashioned barbecue. But what if you’re faithful old grill just isn’t giving you the same thrill as the old days? Is it time to move on to the big leagues?

This month we’ve done the groundwork for you, asking area experts about the hottest summer sellers and gourmet setups that will take your grill skills to the next level. By creating the ultimate backyard cooking environment, you’re sure to leave your guests impressed and stretch out the barbecue season well past the end of August.

At Sobie’s Barbecues (162 Willowdale Ave.), Ernest Amponsah says those looking for a top-of-theline grill need look no further than the TEC G3000, famous for its stainless infrared burner system, which can heat to 165°F in 3 minutes, cooking evenly and faster than any gas model.

“It’s amazing for the searing, and because it is so fast, it retains all the juices more than any other barbecue,” he says. “It’s a whole new grilling experience, and people say they find it difficult to go back to the old models because you get used to that faster cooking time.”

Retailing at $7,700, the heavyduty stainless steel unit, Amponsah says, offers 768 square inches of cooking space and is energy efficient, using 60 per cent less gas than the ceramic infrared burners on the market.

“Everybody who buys it just loves it; they just live in that barbecue,” he says.

Available for $3,000, the Gemini boasts twin cooking systems with two individual grill heads: a highintensity ceramic infrared bottom burner, for searing, and stainless steel commercial-grade tube burners for convection-style cooking. Add onto that a commercial-quality rotisserie, an additional side burner and 1,150 square inches of cooking surface, and Malcolm says customer response has been overwhelmingly positive.

“They love its versatility,” says Malcolm. “It’s so large and with the two lids, you can do two completely different types of cooking at the same time. It’s also locally made, which is something that many people are looking for these days.”

At 360 Living Inc. (360 Davenport Rd.), they carry the Fire Magic gas grills — some of this summer’s most sought-after units, boasting restaurant-grade stainless steel construction and extras like a control panel featuring digital meat and grill thermometers, internal halogen lights for nighttime grilling, and heat zone separators so you can cook multiple items at different temperatures.

“These are really the Rolls- Royces of barbecues,” says vicepresident of marketing Christine Denault. “The features are just beyond, beyond!”

Retailing for approximately $8,000, the grills are known as the barbecue of choice for professional chefs and have been featured on the Today Show’s grilling guide.

“Once people take them home, immediately they call back to say, “‘I want the turkey basket, all the accessories,’” says Denault.

“It’s really for someone who loves the art of barbecuing.”