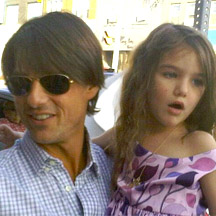 Tom Cruise and his daughter, Suri, made a surprise stop at Eglinton Avenue’s Hotel Gelato on Monday evening.

According to owner Dan Hoffman, Suri ordered vanilla gelato while her dad, revealing why he still has chiselled abs at 48, opted for a glass of water. Tom’s sister, who paid for everything, enjoyed a couple of gluten-free cookies.

Hoffman said the trio sat at the patio in front of the shop for about a half-hour.

"He was very pleasant, very accommodating," Hoffman told PostCity.com. "He spoke to all of us and the customers."

Cruise is in town while his wife, Katie Holmes, films her role as Jacqueline Kennedy Onassis in a miniseries for the History Channel.

The family is reportedly renting out a mansion in Toronto’s secluded Hoggs Hollow neighbourhood.

Hoffman, who previously worked as a concierge at the ritzy Windsor Arms Hotel, was in his comfort zone with the Hollywood star and even managed to get this pic.