The top 20 under 20 in Toronto: Artists and techies - TRNTO.com
Skip to content 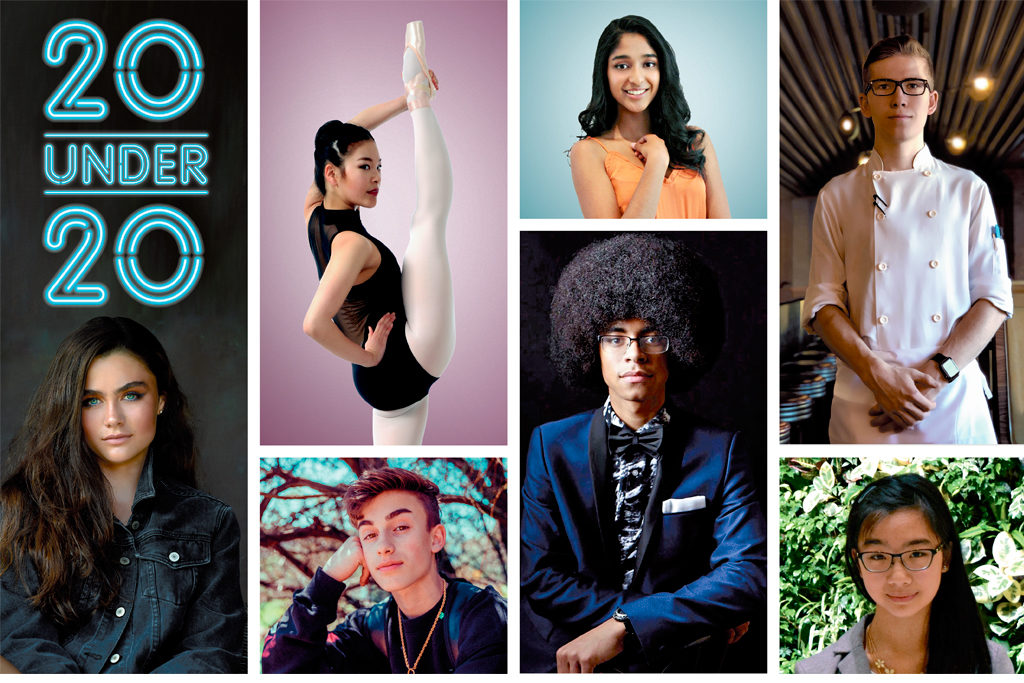 Meet the most dynamic and innovative young people in Toronto. For part one, we got to know the star athletes and change-making activists in our city. In part two, we take a look at the tech wunderkinds, a chef on the rise, and artists ranging from actors to musicians and more. From the world’s youngest IBM Watson Programmer to the star of Mindy Kaling’s hotly anticipated new Netflix series, these youngsters are the best and brightest that Gen Z has to offer.

It’s tempting to call Lola Flanery the new local 2.0 version of Tatiana Maslany, except the North Toronto phenom is uniquely her own star. At the dawn of the premiere of season seven of The 100, a buzzy, addictive American sci-fi series on the CW, Flanery seems to be coming even more into her own as a down-to-earth actor with serious chops. She’s comfortable in her own skin and it shows on screen. Her other notable roles include playing the younger version of the Seelie Queen on Shadowhunters and a recurring role on Mary Kills People. Flanery is young and confident: she has the poise of a young Sarah Polley mixed with the joie de vivre of a wiser soul, like the Emmy-nominated, hilarious local legend Catherine O’Hara. Her reputation is growing while her head remains the same size, a combination for iconic success. So what’s next for the budding young local sensation? It’s safe to say, whatever she wants. — Ben Kaplan 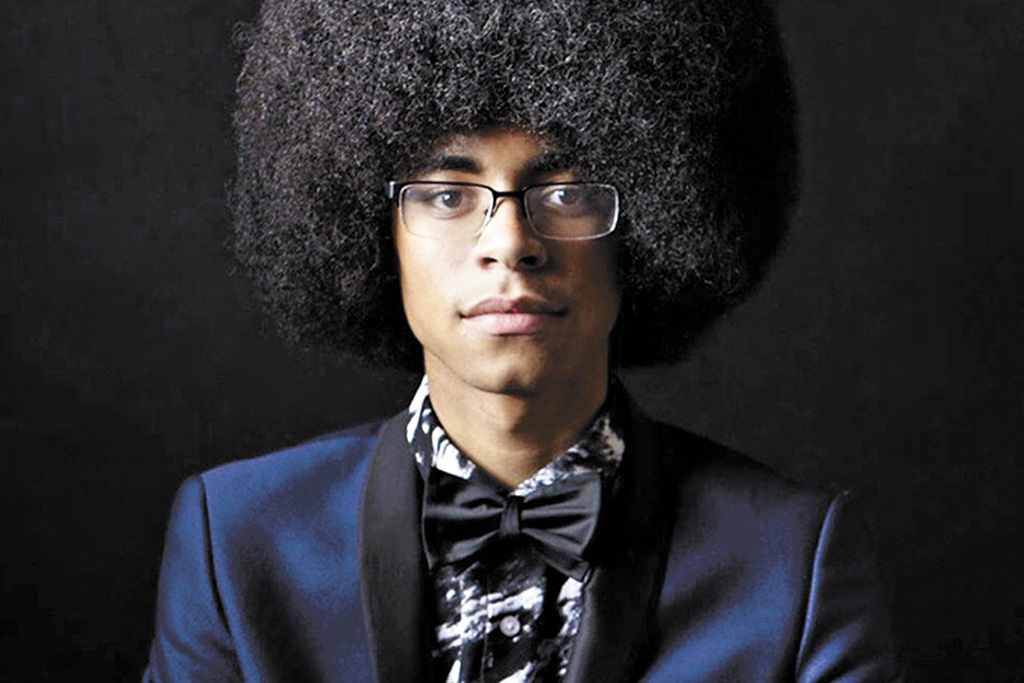 ­From the tender age of four, William Leathers has been a music man. After begging his mom for piano lessons, the tot began his journey to Juilliard. Eventually trading keys for brass, trumpet became his mode of expression. At age 12, he became the youngest trumpet player to join the Toronto Youth Symphony Orchestra. At the conclusion of high school, he was accepted to the school of his dreams. Juilliard is unparalleled in musical education, but the price tag is $91,000 a year for tuition and housing. Leathers launched a GoFundMe page aiming to raise his tuition. The reach of his campaign grew wider than he could have imagined, and in a few short months, the teen trumpeter had raised enough for his first year of school. Now into his second year at Juilliard, he has managed to raise enough for two full years worth of school costs. In February of 2019, he headlined his first show for Black History Month to a sold-out crowd at the Aga Khan Museum. And we’re sure to see more amazing things from him in the future. — Darcy Streitenfeld 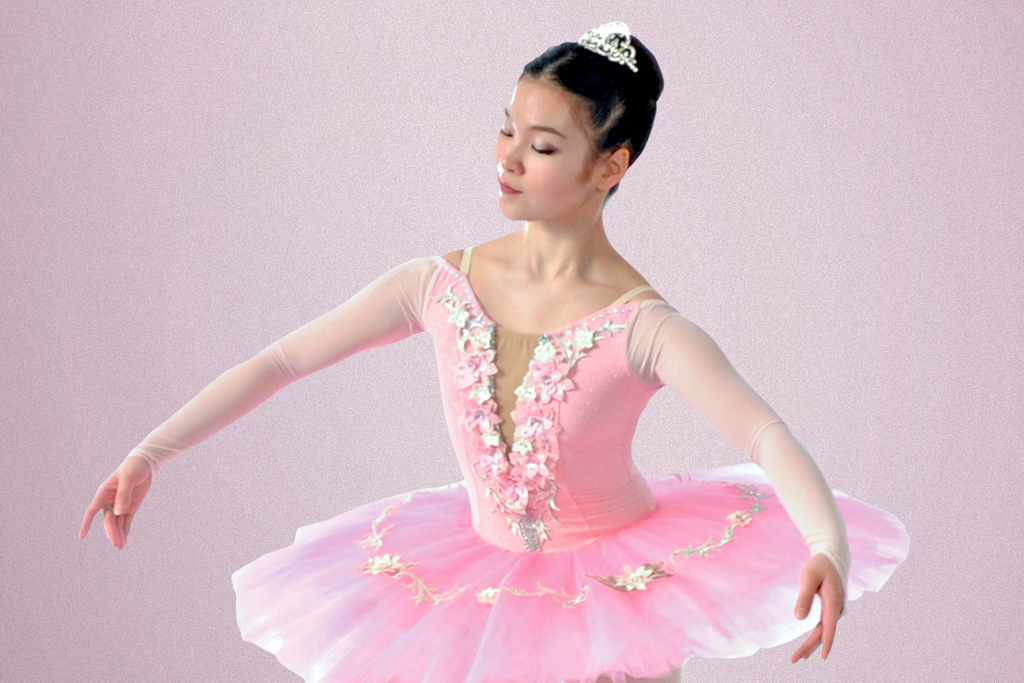 ­Ballet became a part of Jacqueline Zhang’s life when she was four years old and her grandmother took her to dance class. A dozen years later, the dancer has made a name for herself on the world stage. The Claude Watson School for the Arts student competed in the Royal Academy of Dance’s Genée International Ballet Competition this past August. The competition included 62 dancers, 19 of whom were Canadian, and took place in Toronto. “It was such an amazing experience,” says Zhang. “I have gained knowledge that I can take beyond this competition.” Zhang, who trains at the School of Toronto City Ballet between five and seven days a week for two to four hours per day, made it to the semifinals of the competition. “Attending Genée means that I have achieved my Advanced 2 examination with distinction,” says Zhang. “I have been awarded top solos in other competitions.” The Grade 12 student will continue her training in ballet and hopes to land in a professional company or become a dance teacher in the future. — Nikki Gill 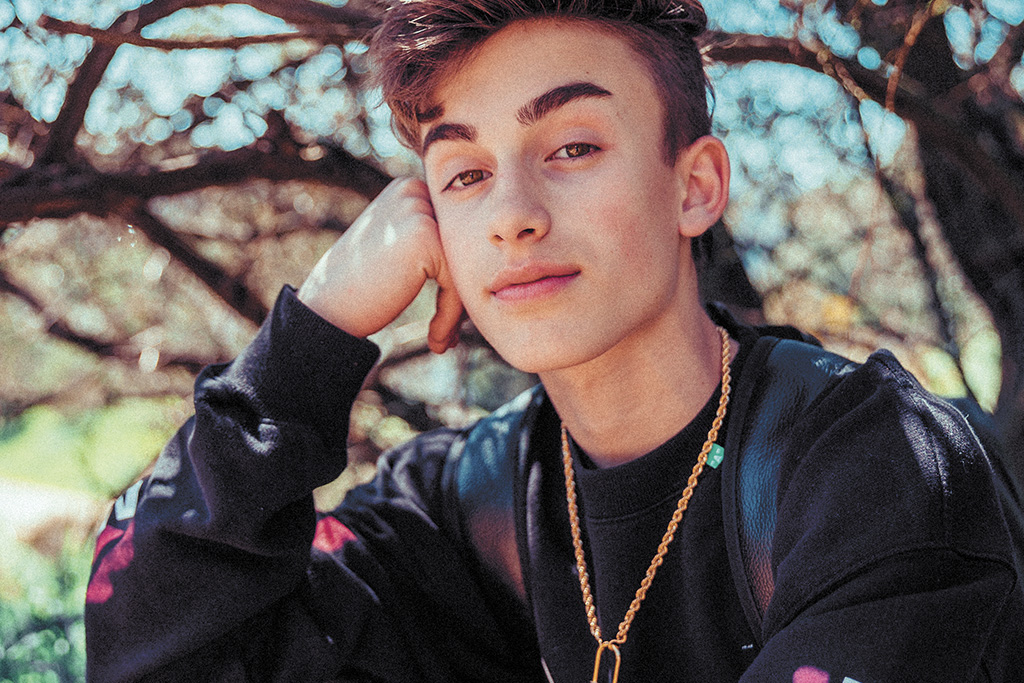 It started with a simple YouTube video. At age eight, Johnny Orlando sang a cover version of “Mistletoe,” by Justin Bieber. Today, that video has more than three million views and has helped solidify him as a force in the music industry. Orlando, now 16, signed a deal with Universal Music Canada last year. He has since recorded six more singles, headlined his first North American tour and released a debut solo EP, “Teenage Fever.” Orlando tells us that fans can expect a lot of new music from him and perhaps another tour. “I spent the whole summer in Los Angeles working with a bunch of different producers and writers, really trying to make the best music I could,” he says. “I know my fans have been eagerly anticipating new music since “Teenage Fever,” so I just really can’t wait to put it out.” With more than 12 million fans online, T.O.’s prince of pop (who counts Justin Bieber as one of his musical idols) tells us that his family helps keep him grounded. “My life has definitely become a lot more hectic over the last few years, so it’s nice to just do nothing when I have free time,” he said. — Nisean Lorde

­Matthew Christakos picked up a cello at age four. What started out as following in the footsteps of his older brothers turned into a rewarding craft. Christakos isn’t just good at playing the cello, he’s somewhat of a musical prodigy. He also put in years of dedicated practice and intense training at the Royal Conservatory of Music’s Taylor Academy. The 19-year-old studied under the tutelage of acclaimed cello masters David Hetherington and Hans Jørgen Jensen. “They gave me all the tools I need to play the cello,” he told the Royal Conservatory. This year alone, Christakos nabbed the $25,000 Canada Council Michael Measures Prize, an extremely competitive award that recognizes young Canadian classical musicians enrolled in the National Youth Orchestra of Canada. In June, he took second place in Stepping Stone 2019 as part of the Canadian Music Competition, another prestigious competition that recognizes 30 young musicians from across Canada. The longtime Toronto resident has set his sights on a bachelor of music at the Curtis Institute of Music in Philadelphia, Pa. — NL

Mississauga’s ­Maitreyi Ramakrishnan stars in Mindy Kaling’s new Netflix comedy Never Have I Ever, set to premiere in 2020. The Tamil-Canadian grew up loving to perform but never thought she’d end up in Hollywood. “This is absolutely surreal,” she says. “I still don’t think it has fully hit me that this is actually happening. That’ll probably happen when I’m sitting at home scrolling through Netflix next year.” Ramakrishnan beat out more than 15,000 hopefuls in Kaling’s open casting call. It all started when a close friend encouraged her to send in an audition tape. When a first callback came through, she attributed it to chance, but when a second callback was followed by an invitation to meet with Kaling in L.A. — that’s when the whole family gave themselves permission to celebrate. It wasn’t long before the lead role of Devi was hers. The series features a coming-of-age narrative for a first-generation Indian-American teen and her family. — DS 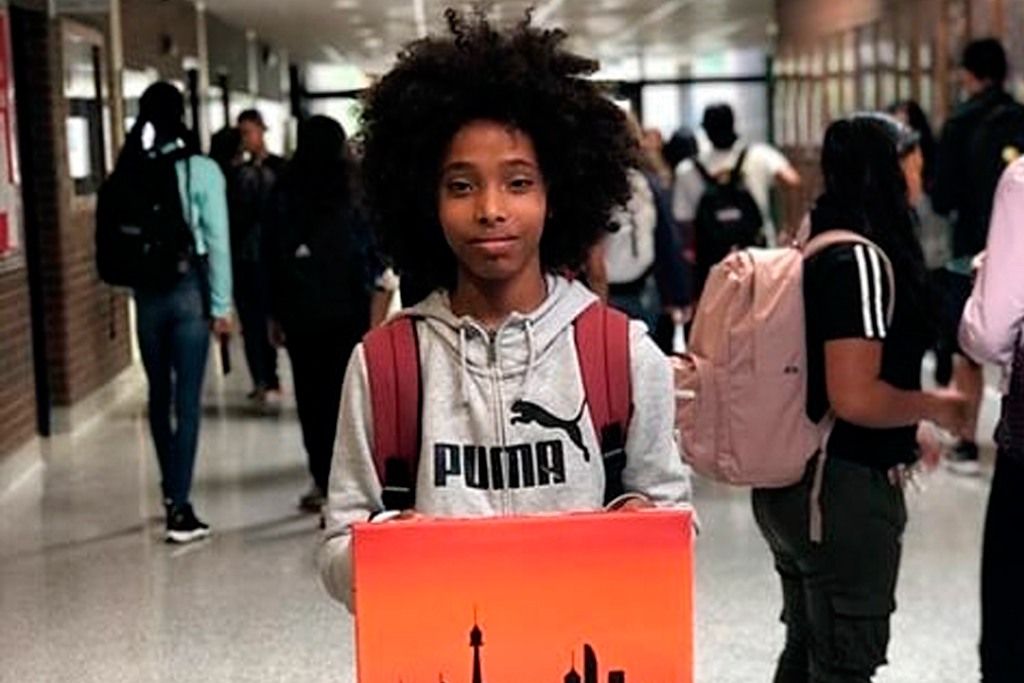 “I’ll save and save and save, until I open a restaurant — then I want to expand,” says Mohamd Ibrahim, a 14-year-old street artist turned Internet sensation who sells his wares at Yonge-Dundas Square. Originally from Abu Dhabi, Ibrahim has a can-do attitude that makes his painted rocks and Toronto sunsets impossible for tourists to resist. A freshman in high school, Ibrahim, who goes by the name of Nile Paints, has graduated from selling water to making art for sale and is slowly amassing a following that would impress even the toughest judges on Shark Tank. With his paint-splattered clothes and tiny dreadlocks, Ibrahim is a whirling dervish of energy and momentum, and his dreams go beyond simply making his next sale. He’s spoken often of wanting to be a millionaire by 24 years old, and his mix of pluck, talent and chutzpah makes the young man a solid bet for entrepreneurial success. His star is rising with each person he meets. — BK 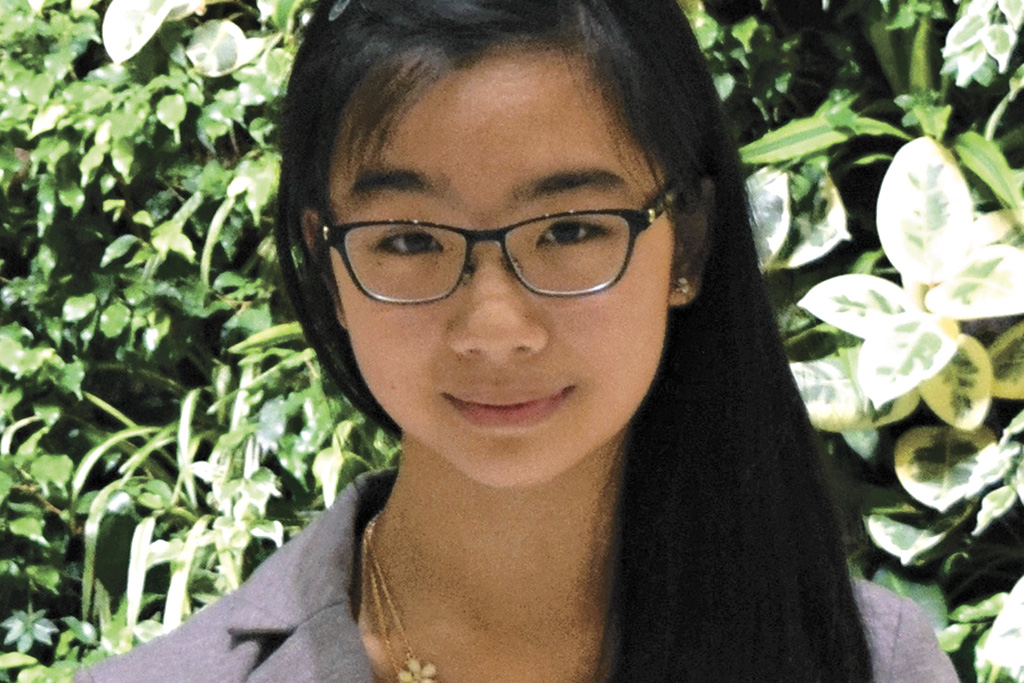 ­Kayley Ting took her love of STEAM (science, technology, engineering, arts and mathematics) and became an advocate for girls in this field and for students with autism. “I have always enjoyed art and making crafts,” she says of her early interest in the field. “When I started elementary school and learned more about science, those crafts started to transform into science experiments.” In Grade 10 at Richmond Hill’s Academy for Gifted Children, P.A.C.E., Ting joined the robotics team and noticed the lack of girls participating. “I worked with my peers to start the school’s first all-girls robotics team,” she says. That team went on to win gold at the Canadian Young Physicists’ Tournament. “I think it’s important for girls to remember that, regardless of the status quo, the field in which you are interested is the field where you belong,” says Ting. She also volunteered at an intensive behavioural intervention (IBI) school for children with autism and created a STEAM-based after-school activity. “It is important that these lessons are shared in a way that every child can understand and enjoy,” says Ting. — NG 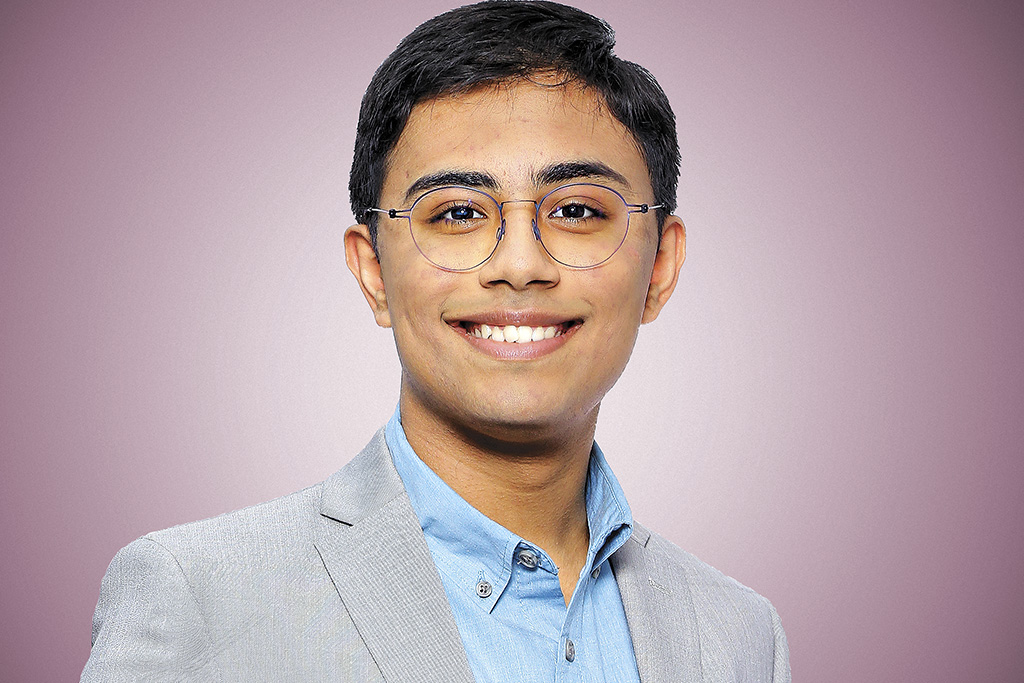 Tanmay Bakshi has an intellect that brings to mind the habits of legendary coding forebears such as Steve Jobs. Bakshi, 15, became the world’s youngest IBM Watson Programmer when he was 12, and created his first app at age nine. The son of a programmer, Bakshi brings a child’s fascination to his trade, such as one would expect of a budding Einstein, and a curiosity that makes work seem like fun, and turns coding problems into games. “It was so fascinating to me how computers could do anything,” Bakshi told CNBC. “I wanted to know how you can control computers and tell them what to do.” It’s not enough for Bakshi to speak before 25,000 people or give a TEDx Talk. The young man isn’t motivated by riches or fame; his obsession currently lies with artificial intelligence. Working with a woman in North Toronto, Bakshi designed an AI system for a quadraplegic child to communicate with the people she loves. “Without deep learning, it’s impossible,” Bakshi said. “[AI] can augment and save so many lives. That’s what I’m most passionate about.” — BK 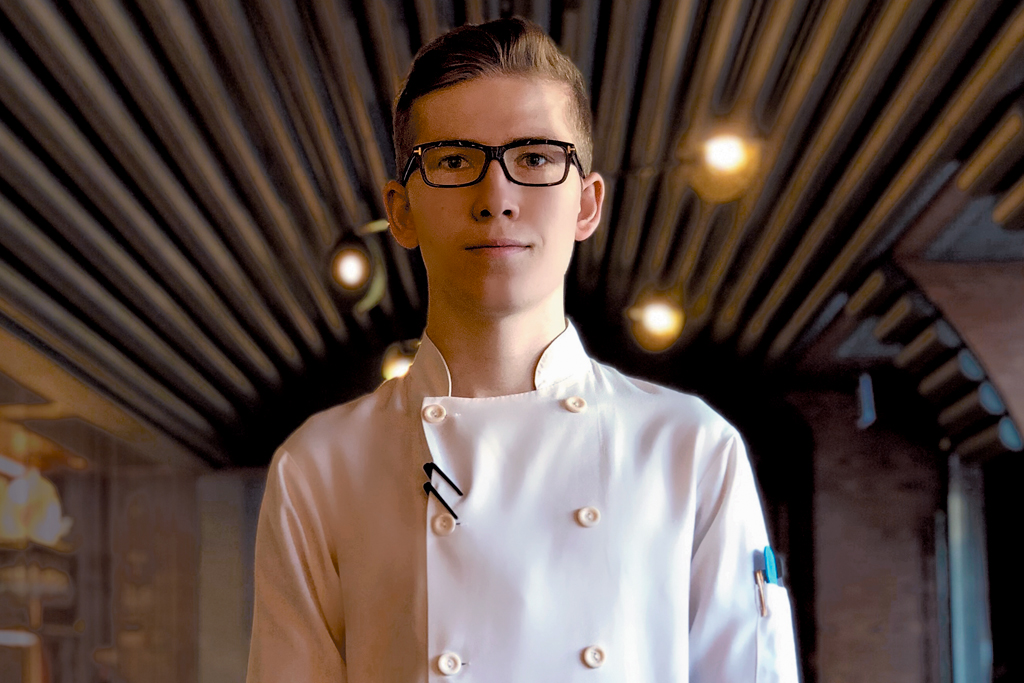 Christopher Lexovsky is no stranger to the restaurant business: his father and grandfather both owned restaurants, and he started cooking at age nine. By the time he was 15, the north Leaside resident was working at the Daniel et Daniel catering company as a prep cook. “Moving forward from there, I knew right away that cooking is what I wanted to do as a profession the rest of my life,” says Lexovsky. So it wasn’t a surprise when the teen decided to compete on Chopped Canada Teen. “The way I always grew up cooking was without recipes or guidelines to follow, so it really helped in the Chopped kitchen by allowing me to be creative,” he says of the experience. Now at age 20, Lexovsky is the chef de partie at Aloette and says it is the best kitchen he has ever worked in. “As far as age goes, I’m much younger than most of the cooks and chefs there, but I see it as an opportunity as I am learning from some of the best in the city,” says Lexovsky. — NG