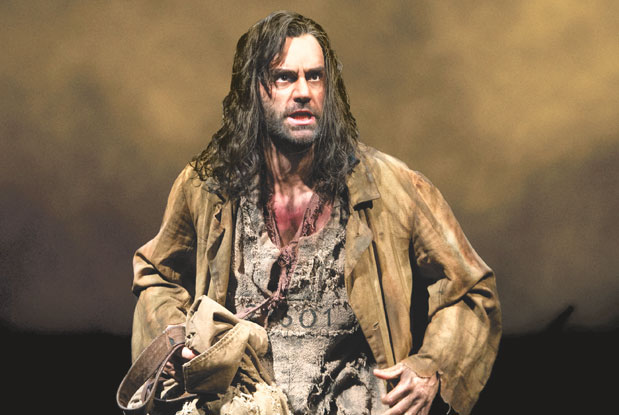 Toronto theatre-goers have a lot to look forward to this fall. From Mirvish mega-musicals to silly scenes from The Second City, we’ve got a busy theatre season ahead of us. Here are our top picks.

The return of Les Misérables
Even though we can probably thank the success of the Oscar-winning 2012 film for the musical’s recent resurgence, Les Mis has always been pretty popular around these parts since making its Canadian debut in 1989 at the Royal Alexandra Theatre. To mark the musical’s triumphant return — and its 25th anniversary — the Cameron Mackintosh production promises to be different than the original, and the all-Canadian cast features Richmond Hill native Ramin Karimloo as Jean Valjean.

Anything thrice is nice
The acclaimed Soulpepper Theatre Company is trying something a little different this fall with its production of Alan Ayckbourn’s trilogy of plays The Norman Conquests. Each of the plays, which as a unit depict the same six characters over the same weekend in a different part of the house, will be shown as its own production, so that the comedic stories can either be consumed individually or as a whole.

The prodigal son returns
Award-winning playwright Daniel MacIvor pulls double duty — writer and actor — with his latest play, The Best Brothers, at the Tarragon Theatre from Sept. 17. A hit at last year’s Stratford Festival, the bittersweet comedy wrestles with the fundamental themes of love and family after a freak accident kills the Best brothers’ mother at the Toronto Gay Pride Parade.

MacHomer no more
Toronto’s Rick Miller, who travelled the world for the past decade in a series of one-man shows, including the very successful MacHomer, gets serious in the Canadian Stage production of Venus in Fur, opening Sept. 29. Apparently, this play, also starring Carly Street, was the talk of Broadway last year on its way to a Tony Award nomination for Best Play. Expect fireworks.

Power to the Petty
There is only room for one pantomime in this town, and as long as Ross Petty is at the controls, that is just fine. His annual holiday production this year is The Little Mermaid, and it kicks off on Nov. 22. Good news for Petty fans, the show marks another appearance by long-running character Dame Plumbum played with serious gusto by Dan Chameroy.

Cookin’ with Gass
When artistic director Ken Gass left Factory Theatre, a huge part of Toronto’s theatre community was taken away. But he’s back with his own Canadian Rep Theatre company. This January, Canadian Rep Theatre kicks off its season with the English language premiere of Wajdi Mouawad’s Pacamambo. Two big plays by former Factory Theatre loyalists Judith Thompson and George F. Walker follow in 2014.

One woman some cry
Musical theatre icon Louise Pitre hits the stage at Theatre Passe Muraille with her one-woman show for four dates only, beginning Sept. 25. The show features mostly original songs and is described as a “mixed cocktail of raw emotion.”

On The Rocks, Sept. 25 to 28, Theatre Passe Muraille, www.passemuraille.on.ca.

We need a hero
It might be hard to top the Second City’s last production, The Meme-ing of Life, which was one of the company’s most popular revues to date, but the funny folk at Canada’s top comedy institution are going to give it a go anyway. We Can Be Heroes is the title of the 2013 fall revue, and though not much is known about the new sketch show, we’re sure that, like the Dark Knight, it rises to the comic challenge.

We Can Be Heroes, runs until Jan. 12, The Second City Mainstage, www.secondcity.com.

Have a heart
The Pulitzer Prize–winning, Tony Award–winning musical Next to Normal is hitting the LOT (Lower Ossington Theatre) to help kick off the new season. And with the new season comes two new collaborators to the LOT, director Heather Braaten and musical director Paul Moody, who are working together on the project in support of CAMH (Centre for Addiction and Mental Health). The partnership is fitting since the musical explores how a mother’s worsening affliction with bipolar disorder affects her family. A thrilling musical for a good cause? Sign us up.

Next to Normal, Aug. 29 to Sept. 29, The Lower Ossington Theatre, www.lowerossingtontheatre.com.

Toronto chainsaw massacre
Another production to make its return to a Toronto stage is Evil Dead: The Musical and its unique “splatter zone.” The made-in-Toronto show, created by George Reinblatt, is slated to take over the Randolph Theatre with its original star, Ryan Ward, back in the lead.

Also this fall:
Night of the Living Dead Live returns to Theatre Passe Muraille in October, just in time for Halloween.

Everyone’s favourite redhead — Lucille Ball — has some ’splainin’ to do when her beloved TV series gets the live-stage treatment with I Love Lucy — Live on Stage in October at the Royal Alex.

Toronto will be home to a “whole new world” when Disney’s Aladdin has its world premiere at Ed Mirvish Theatre in November.