Torito is getting a sister restaurant on Queen West - TRNTO.com
Skip to content 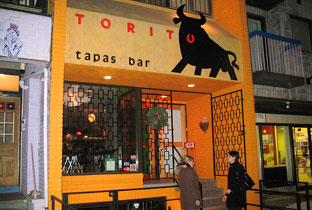 A new Spanish restaurant from the team behind Torito is set to open soon on Queen West, near Shaw. Torito’s chef, Luis Valenzuela, has financially partnered up with Torito’s owner, Veronica Laudes, for the new venture. The restaurant is slated to open in late March.

The specifics of the new place — the name, the exact address — haven’t been publicly revealed yet, but Valenzuela tells us that it will offer tapas, paella and more. He will remain as executive chef at Torito while heading up the new operation.

UPDATE: March 13
Mr. Valenzuela has revealed to us that the new restaurant will be called Carmen, and it will be located at Cajú’s old space at 922 Queen West.