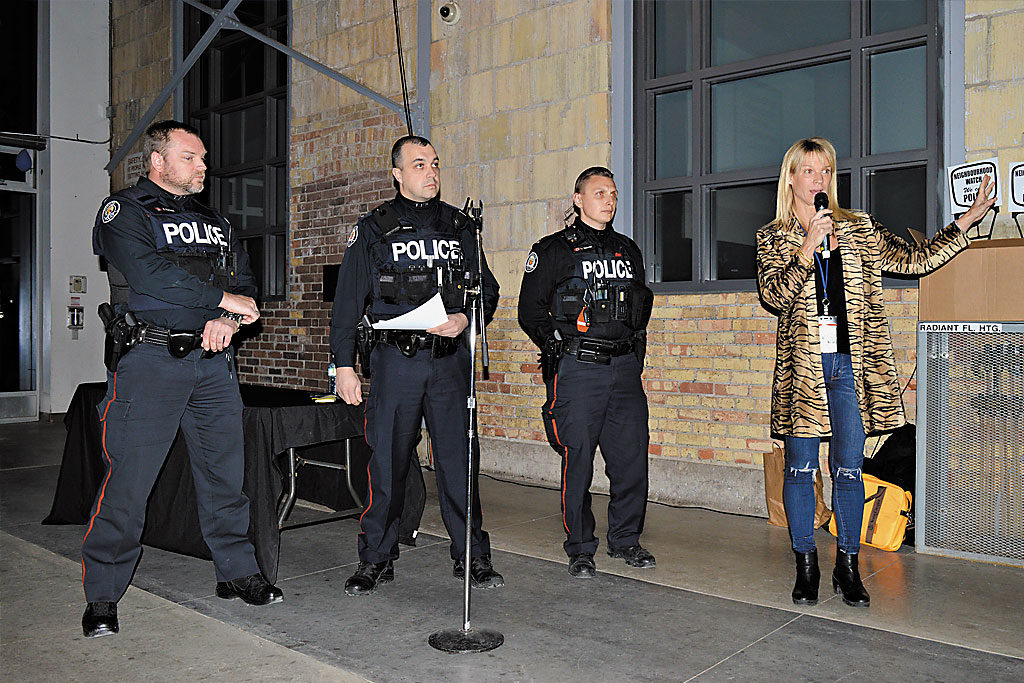 A recent spate of car break-ins has put residents in the St. Clair Avenue West community on edge, and they’ve decided to act quickly. After a series of meetings, an event was organized by the St. Clair West Residents Group (SCWRG) to set up a community watch program. SCWRG reached out to community leader Didi Cameron to help with this endeavour.

About a year ago, Cameron started another neighbourhood watch program in her own neighbourhood of Yonge Street and Lawrence Avenue after a spate of violent incidents.

“There is definitely an uneasiness every morning,” said Lorena Volkenborn. “My husband wakes up very early, and now the first thing he does is to go out and check the car.”

On the morning of Nov. 8, the Volkenborns found their Lexus severely damaged.

Theirs was only one incident in a total of 62 reported occurrences of mischief and theft from auto vehicles near Vaughan Road and St. Clair Avenue West. According to data from the Toronto Police Service (TPS), these incidents all occurred between Oct. 18 and Nov. 12.

According to the Volkenborns, officers followed up two days after they filed a police report to let the couple know that they were unable to find any leads based on insufficient evidence.

“This is unacceptable,” said Lorena Volkenborn. “I don’t care if they have to hire more people, but something has to be done. This is not something I am willing to settle for.”

Depending on the vehicle, damage costs can vary from $500 to $1,000 or more for a broken window. Nothing was stolen from their car, but the Volkenborns had to pay over $1,100 in damages. Based on their investigations, officers believe that this neighbourhood is specifically being targeted.

“It’s an organized crime issue. It’s not just a person with substance abuse issues, making sure no one is home and taking whatever they can,” said Rui Simoes, neighbourhood officer for TPS 13 Division. “They are targeting homes and vehicles that they know have value.”

“This is unacceptable. I don’t care if they have to hire more people, but something has to be done.”

Because most camera surveillance systems don’t capture footage particularly well at night, which is when most of these incidents occur, police have had difficulty gathering sufficient evidence.

“It has left many neighbourhood residents in a state of fear, not knowing what they are going to find the next morning,” said Josh Matlow, incoming councillor for Ward 12 Toronto–St. Paul’s, an incumbent whose newly expanded ward now covers the St. Clair West area.

A meeting was held on Nov. 21 at the Artscape Wychwood Barns, where Cameron and officers from the TPS 13 and 53 Divisions began the process of setting up a community watch program for St. Clair West.

On top of putting up signs warning away possible perpetrators, Cameron also has created an online announcement board where she posts updates for the neighbours and officers.

Residents correspond with Cameron directly via email, providing her with any information or evidence. She then checks with police to ensure only facts are presented and sends updates to the residents.

“It is different than Facebook because of the security and privacy,” said Cameron. “It is strictly me letting them know what has happened, if they have information, to give it to me or to send it to the cops.”

One common sentiment echoed by both the councillor and residents is the need to increase police presence in the area.

“Our community’s message to the police is that they do everything they can as quickly as possible to create a safer climate in the neighbourhood,” said Matlow.

“In turn, the police are asking community members that, if they are a victim or a witness to these crimes, to report directly to 13 Division.”