Locals fought to save Starbucks coffee shop but some argue this nearby church was forgotten | TRNTO.com
Skip to content 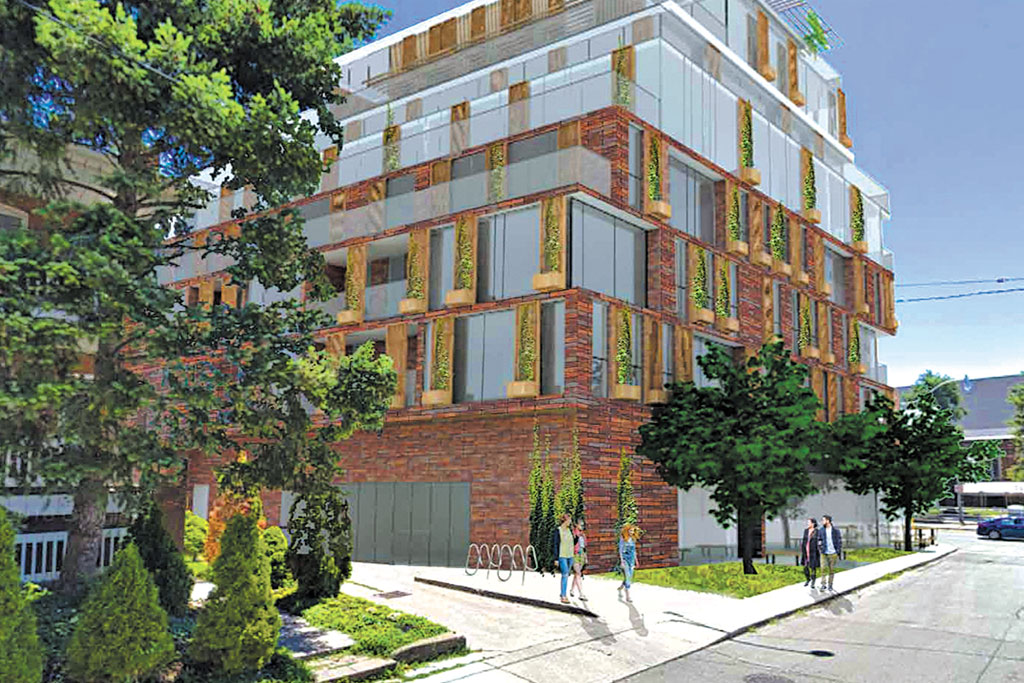 A new eight-storey condo is being proposed for St. Clair Avenue West and Wychwood Avenue to replace a “derelict” church that dates back to 1937.

The proposal for 155 Wychwood Ave. consists of 29 condos that vary from one to three bedrooms, as well as 250 square metres of retail space on the ground floor with three bays facing St. Clair Avenue West.

It features a brick-and-glass design done by KC AU Architects that local councillor Josh Matlow said is “really nicely detailed” and “references some of the materials of the church,” which had a dark brick design that reflected its Scottish Presbyterian origins.

The Wychwood-Davenport Presbyterian Church was sold to developers in 2014 and its congregation moved to a nearby seniors’ home. Although there had been a vibrant congregation there in the 1960s and ’70s, it had lost members beginning in the 2000s until it was a shadow of its former self, Minister Kevin Lee said.

“The decision to sell was forced upon [the congregation after] continual decline over the 10 years previously,” Lee said. “The [church] was in disrepair, and there was no way for the congregation to maintain that building in any way.”

Toronto City Council stated its intention to give the property heritage designation in 2013, but that never materialized.

When the church finally closed in 2014, there was not much community resistance.

“Did you hear about the petitions that were signed when the Starbucks was going out of business at the corner of Christie and St. Clair Avenue West?” Lee queried. “There were no petitions by the community when [our] church closed, which was kind of sad.”

Now, the space will be given new life, something Matlow said the community has wanted.

Matlow said that the area is in need of new residences as more people are moving to the city and can’t find a place to live.

“It’s really important that we have a supply of affordable housing in our city for people to be able to live here, and certainly this community is no exception,” he said.

How affordable the condos will be hasn’t been determined, but Matlow is pushing for it.

Although the developers that purchased the land in 2014 originally wanted a nine-story, 53-unit building, the plan was scaled back a little when the land was resold to its current developers.

Matlow said the community is happy that the proposal now stays within the guidelines for St. Clair Avenue West.

“[The developers] are not trying to exceed the city’s vision for what the height should be at eight storeys, which is rare these days,” he said.

There have been some community concerns about traffic, Matlow noted, and the use of a nearby laneway, which children currently play in. Twenty-two parking spots have been proposed for the laneway.

However, Matlow said the developer has promised to do a traffic study to address those concerns.

As for the retail at the bottom of the building, Matlow hopes that it will consist of smaller mom-and-pop shops rather than a big box store to maintain character on St. Clair Avenue West.

The history of the site will also likely be commemorated in some way that has not been determined.

“It’s a building that represents the spirituality of a group of people that built the city — basically the Scottish Presbyterians,” Lee said. “The church represents that ethos.”