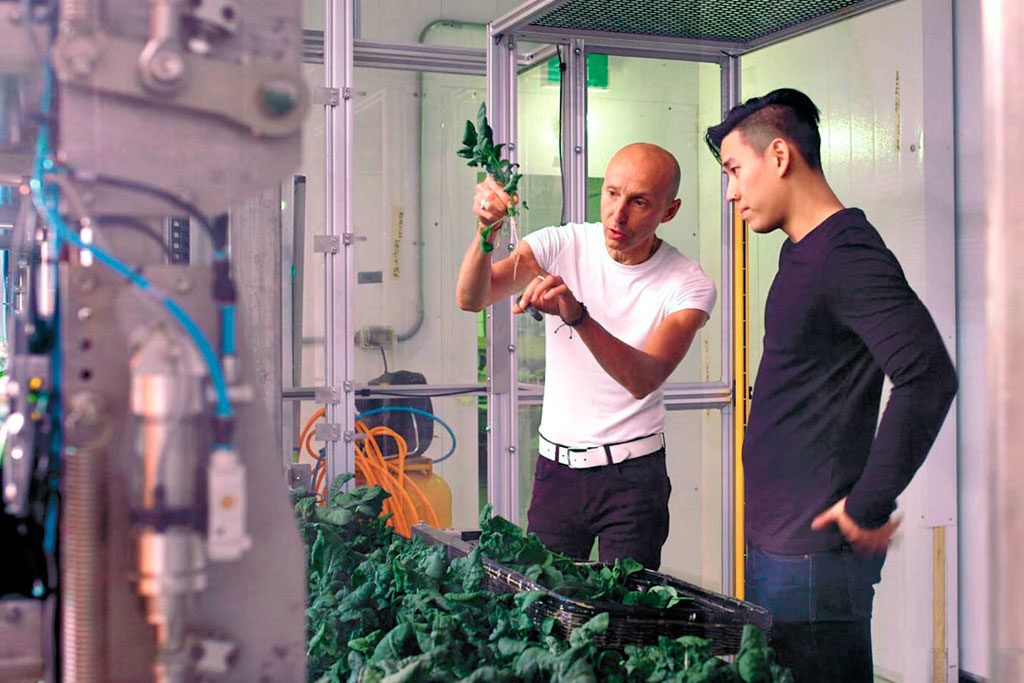 Brothers Guy and Michael Rubino have established a reputation for their powerhouse combination of culinary and business expertise. But in early 2018, they embarked on their most innovative and exciting venture yet: a vertical farming company known as We the Roots.

The technology was initially developed by the University of Guelph’s Controlled Environment Systems Research Facility (CESRF), NASA and the Canadian Space Agency, to address questions around the viability of space travel and perhaps one day, our ability to sustain human life on other planets.

“Food determines how far from Earth we can go and how long we can stay,” explains the director of CESRF, Dr. Mike Dixon.

“Plants are extremely tough — they will not be the limiting factor for a greenhouse on the moon or Mars. We’re the vulnerable critter. We can’t do long-term human space exploration without them.”

But despite its origins, this technology is proving to have many applications in our everyday world.

We the Roots is growing about 4,500 plants per week in a 1,000-square-foot facility in Scarborough, supplying restaurants across Toronto with fresh, local produce year round, including basil, arugula, mizuna, cilantro and kale, all of which are ready to eat, non-GMO, and pesticide-free.

“Our background in Toronto’s restaurant scene has helped us a lot,” says Guy Rubino, one of the company’s four co-founders.

“We have all tasted hydroponic arugula or kale, but quite frankly there was a lot to be desired. Most chefs who have tried a sample [of our product] didn’t believe it came from an indoor farm.”

“It was one of the few products, when menu tasting for Quetzal, that unanimously blew us away,” says chef van Gameren. “They have taken somewhat of a ubiquitous green, like kale or arugula, and given chefs a reason to get excited about them again.”

This company is the result of a  partnership with Intravision Group, a photobiology company focused on plant and produce technologies, and the CESRF.

We the Roots’ vertical farming technology engages many of the hydroponic and aeroponic (the process of growing plants in an air environment without the use of soil) methods consumers have heard about in the past, but it also relies on LED light technologies that give growers more control over what the final product will taste, smell and feel like.

“Each different colour the sun gives out has a direct impact on the plant,” explains Rubino. “By using multiple LED light colours, we can replicate what the sun would normally provide but create our own ‘light recipes.’ ”

CESRF has been working on the research on vertical farming technologies since 1995.

It has become internationally renowned for innovations that could respond to global issues such as climate change, overpopulation, resource scarcity and food security. Dixon is part of a growing population in the scientific community that suggests our food futures rely on “environmentally modified organisms” (EMOs) as opposed to genetically modified organisms (GMOs).

“The chemistry that happens in a plant is so profoundly affected by the environments that we now have such fine-tuned control of,” he says.

“You can give me a plant, and its original genetics will have an impact, but I can turn them on their ear just by messing with the colour of the light,” Dixon says.

“Toronto has a great food scene,” says CEO of We the Roots, Amin Jadavji, “but we have a very short local grow season. The reality is that for most of the year our food comes from California, Arizona or further. That’s 5,000 kilometres of travel in the back of an air-conditioned truck. I believe that we will see many more local restaurants all around the world being supplied by a local vertical farm.”