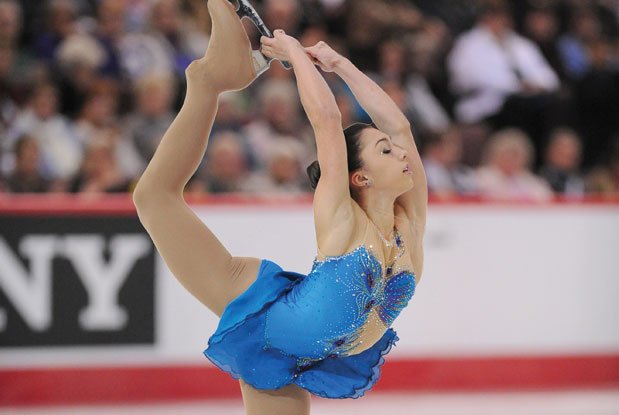 To celebrate her 16th birthday this January, Gabrielle Daleman spent the day in media meetings and indulged in a single birthday cookie. She also cheered from the bleachers as her younger brother figure skated his way to fifth place at nationals, in the novice division. It was not your average sweet 16 because Daleman is not your average teenager.

Just one day before her birthday, the Toronto native was chosen to represent Canada at the upcoming Sochi Olympics as part of the high-octane Canadian Olympic figure skating team. She is the youngest athlete of the bunch.

The selection was announced after Daleman skated to second place at senior nationals — a spot she also claimed last year. Needless to say, it was a dream come true for the fiercely devoted athlete who is able to recall the precise moment her Olympic hopes crystallized:

“When I was eight, I was watching Joannie Rochette at the 2006 Torino Olympics, and I said to my parents, ‘That’s what I want to do when I’m older. I want to go to the Olympics and wear that Canada jacket and represent Canada.’ ”

At that time, Daleman already had years of skating under her belt. She first stepped on the ice at age four, in a somewhat inauspicious debut for a future Olympian.

“I did not want to get on that ice,” she recalls. “I sat and cried.” Yet once she steadied herself and skated, “they couldn’t get me off the ice.”

Shortly thereafter, Daleman launched into a four-times-a-week practice regime that would grow exponentially over the years and yield clear dividends. Nowadays she trains five hours a day at the Richmond Training Centre in Richmond Hill.

By the time she was 12, Daleman was competing at the national level as a novice, and her coach suggested she move up to juniors the following year. His intuition served Daleman well: she won junior nationals, prompting her jump to seniors just one year ago.

Daleman’s skating abilities have taken her to plenty of far-flung locales, like the Netherlands, Estonia and Japan, where the young athlete got the chance to take a turn on the ice with the biggest names in Canadian skating, including Patrick Chan. “She loved it,” says Daleman’s mother, Rhonda Raby, of the experience. “She was skating with the stars.”

As with any serious athlete, Daleman’s success results from a fine balance of talent and dedication. The talent is beyond her control, but Daleman is constantly renewing her commitment to her sport by taking on every challenge in her path.

“I like to set my goals higher so I can push myself more,” she says, describing her approach to training. “We have a lower goal and then a bonus, but I always like reaching for the bonus instead of the lower goal because it pushes me more.”

This single-minded zeal separates her from most other teenagers, including those at Richmond Green Secondary School where Daleman is in Grade 10. While her peers may be tweeting about their latest music video discovery, Daleman’s twitter feed is a stream of motivational quotes and aphorisms, reminders that “winners don’t wait for chances, they take them.”

Daleman is well aware of the divide between her and her classmates. Although she is a fearless on-ice performer, she admits that, off ice, she’s actually a bit of an introvert.

“I like to keep things more to myself than outside,” says Daleman. “Skating is the one place I express myself. If you ask anyone at my school, I’m really shy, and I don’t really talk to people I don’t know at all.”

Although her high school peers may not know an axel from a Salchow, Daleman’s figure skating friends have been there with her every step, jump and spin along the way.

“They’re just the best. They’re so supportive,” Daleman says. “They help me with my nerves and frustration, or if I get, like, worried, they all help me with it.”

Even with the unwavering support of her friends (and of course of her family — Daleman’s father is her off-ice coach and her mother handles the media), Daleman is all on her own once she steps on the ice. At nationals, she handled her nerves like a pro.

“Once I heard the crowd, I felt at home,” she says. “So then I was like, ‘OK, let’s show everyone what I’ve been working on and what I’ve been training my whole life for.’ ”

Now, as she looks ahead to Sochi, with routines choreographed by the world-renowned Lori Nichol, Daleman is simply excited to participate and cheer her teammates on. “I’ll be happy just watching the competition from the family lounge in the Canada room — that would be great.”

In preparation for her own program, Daleman’s routine is a combination of her normal training routine and a slew of media appearances. Amid the excitement, she is maintaining her fine-tuned focus on her sport and on the fundamental reason she skates.

“I just talk to myself, knowing that I trust my training, and I tell myself just to have fun,” Daleman says. “You worked hard, but if you don’t have fun then there’s no point in doing it. I love having fun skating and it’s what I do.”

Take a break from shopping and watch all the action as Canada's athletes compete for Gold! Visit Promenade's CBC Olympic viewing lounge from Feb. 7-23rd in Centre Court. Go Canada!