Toronto is getting a new linear park, but locals fear private interests will take over | TRNTO.com
Skip to content 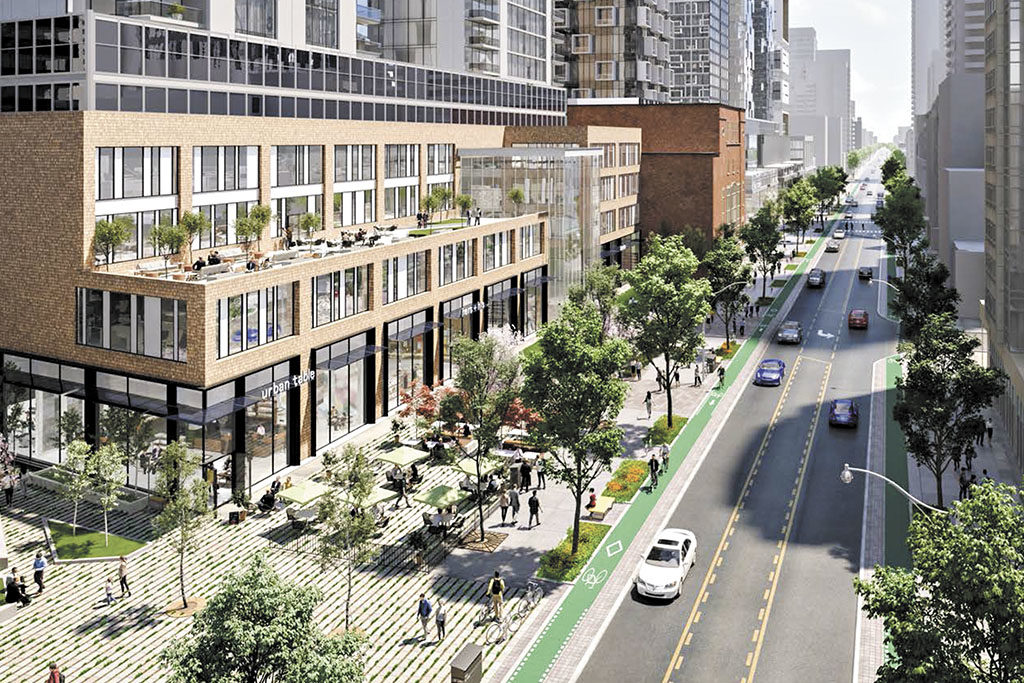 A proposed linear park designed to run from Yonge Street to Mount Pleasant Road on the north side of Eglinton Avenue East is the subject of some concern among local residents, due to the recent proposals of three high-rise condominiums along the Eglinton East corridor.

On Sept. 13, the three development proposals that are currently under review were presented to the Toronto Design Review Panel as one single presentation.

The Green Line was introduced as part of a larger study of the area called Midtown in Focus, first proposed by Toronto City Council in 2014 and voted in through council last year. The Green Line was proposed to offer a solution to the rapid intensification along the Eglinton corridor as well as in the rest of midtown by creating a space between buildings for community amenities and allowing sunlight into dense areas.

“One of the goals here really is to make sure that the space is obviously something that is public,” said Alex Teixeira, a senior planner with the City of Toronto. “This is a really big opportunity for a new and interesting public space in an area that doesn’t have as much green space as some other areas in the city.”

According to Teixeira, in order to create room for the Green Line, future developments along this stretch of Eglinton Avenue East will be required to be set 12 metres back from from the property line.

City staff would then take the mandatory 12-metre setback and use that as a guideline to design common spaces and green areas.

Teixeira has confirmed that both of the developers are on board and have designed their proposals to be set back 12 metres from the property line.

“The natural tendency would be for those owners to want to project the commercial space outward.”

“One of the things [the panel] said was look at really establishing firm objectives and clarity of purpose for the place,” said Teixeira. With the new directives supplied by the panel, his team will begin to work with city staff and neighbourhood representatives to find the best use of the space.

However, local residents, particularly the South Eglinton Ratepayers’ and Residents’ Association (SERRA), who worked with Teixeira’s group on Midtown in Focus, are concerned that the city’s current approach to developing the Eglinton Green Line could result in the encroachment of private interests onto public space.

“I don’t think that works very well, to be honest,” said Andy Gort, president of SERRA. “The natural tendency would be for those owners to want to project the commercial space outward.”

Gort cites the Aroma Espresso Bar on the northwest corner of Yonge and Eglinton as an example of what could happen.

There, Gort said, it is unclear whether the patio is formally licenced or a public space. The café has received criticism for putting out tables and chairs as well as a sign indicating that the seats are reserved for customers on a public plaza at the Yonge Eglinton Centre.

Gort is worried that a similar scenario could play out on the Green Line. He said he would prefer a comprehensive Green Line design from the city itself that would inform new incoming development to the area.

“I think it would be a good idea to set some minimum standards or design guidelineås in terms of amount of green space that’s required and also some design guidelines as to what’s expected there,” he said.

Despite the differences of opinion on the approach of the Green Line, Gort is optimistic about the future of this space.

“It would be a shame to let that opportunity go by. We have next to nothing here in terms of open space and greenery,” he said.