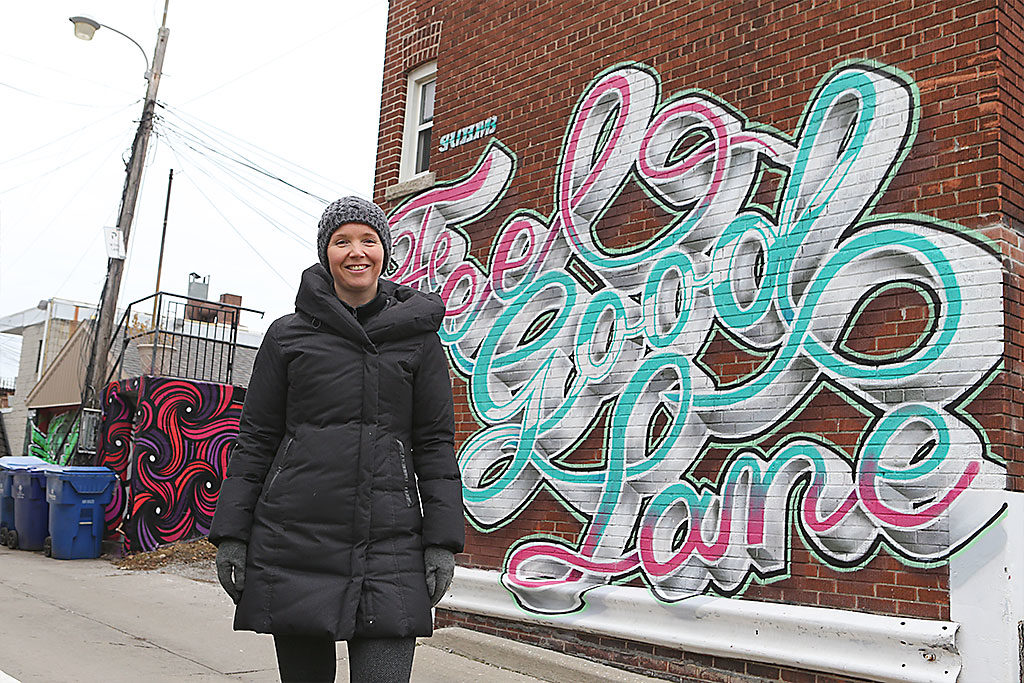 An unintended consequence of the recent trend of naming Toronto’s laneways is more traffic and potential risk to local families. Evidence suggests that as laneways become officially recognized Google Maps and car-sharing apps are sending more traffic through these small local streets.

“I think there has definitely been an uptick in the use of laneways by Uber drivers and, to a lesser degree, taxis,” said Marc Hollin, a resident of Seaton village. “Before the laneways were named I don’t think it came up on Google Maps. Since then, all my neighbours are noticing an uptick in use. Now it is being used for through traffic.”

He said that people often speed down the laneway behind his home in his Davenport neighbourhood and turn dangerously around blind corners. He also noted that he has seen the Uber and Lyft signs on the cars in the laneway, and that sometimes they are waiting to pick up riders there, not knowing it is the back of the properties.

“The problem for us is [laneways are] where our kids often play, so we don’t love to see a lot of fast-moving traffic back there,” Hollin said. “[It is] totally a safety hazard.”

In the beginning of 2013, the City of Toronto set out to name laneways to pay homage to Toronto’s history, as well as help Toronto Emergency Medical Services (EMS) travel through laneways, according to former city councillor Joe Mihevc, who helped lead the initiative in Seaton village and the rest of his ward.

“We saw a heritage opportunity to celebrate the local people who have contributed to their community, and the EMS people supported the naming of laneways because it is easier if there’s an incident in a laneway to know the name of it,” Mihevc said.

Eric Holmes, spokesperson for City of Toronto, Transportation Services, confirmed that roads appear in Google Maps once they are named, due to Google’s algorithm in its software.

“From my understanding, once a laneway is named, those are the ones that are appearing,” he said.

Michelle Senayah, co-founder and executive director of the Laneway Project, a laneway revitalization advocacy group, agrees that more traffic down laneways is a safety hazard. Senayah said that she has heard of speeding occurring in laneways of neighbourhoods where her group has been active for the past four years.

“Anytime you’ve got people moving through a space at a speed that they’re not going to be able to stop to avoid collision with another user, that’s a safety concern,” she said.

When it comes to solutions to calm the traffic going through residential laneways, all parties have different ideas. Mihevc suggested that the city should have a conversation with ride-sharing apps like Uber and Lyft.

“I think the city talking with Uber is the best [solution to] get them to change their algorithm so laneways become ineligible when asked the shortest distance between A and B,” he said.

According to Holmes, there is currently no code or bylaw that prevents traffic on named laneways in Toronto, but residents can consult the city’s Traffic Calming Guide for Toronto to see how they can make a request for traffic calming measures in laneways, such as speed bumps.

Neither Mihevc nor Senayah believes simply putting in more speed bumps is the solution.

“That’s not going to deter people,” said Mihevc. “If the computer tells them to use it, then they will use it.”

Senayah believes the answer lies in what she calls “design speed,” which is creating an environment in the laneways that presents them more as a living space than a throughway. This involves measures like putting up murals depicting children playing, increasing lighting of the space and incorporating greenery, to create a more people-oriented space.

“If people are using them to cut around traffic or construction, they can do so, but they need to realize that they can’t drive at street speed in these spaces,” she said. “That’s something we hear very commonly from communities we work in.”