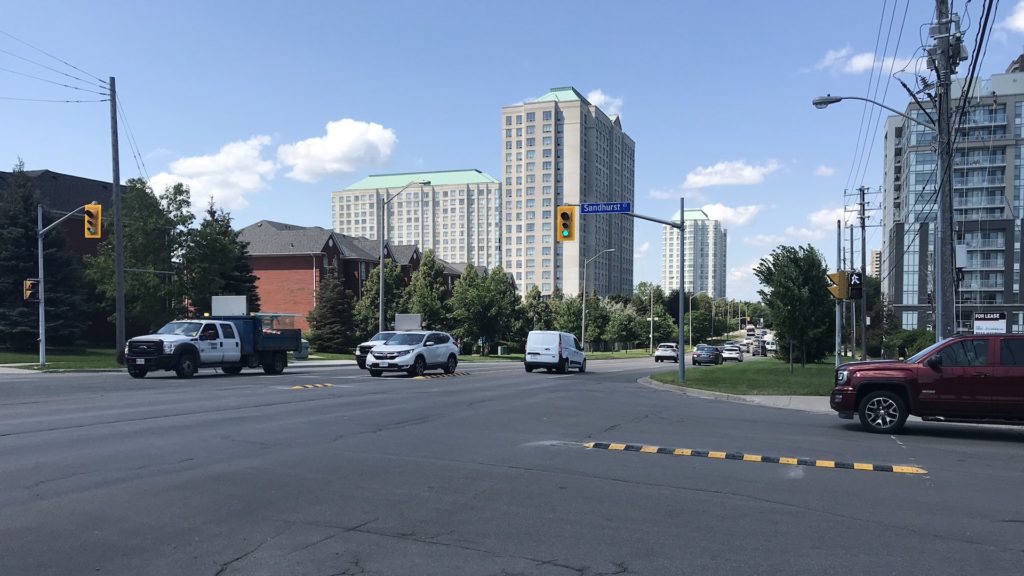 Toronto will soon install rubber bumpers at eight intersections across the city in an effort to make vehicle left turns safer including a troublesome corner at Mt. Pleasant and Merton in the Midtown area where a pedestrian was killed.

The city announced its “Left-Turn Calming Pilot” that will include rubber speed bumps extending into intersections to “harden” the centreline and “encourage drivers to approach the crosswalk at a sharper angle instead of cutting across intersections diagonally,” the city said in a news release.

The result will hopefully be slower turning speeds and better visibility of pedestrians and cyclists crossing the street, according to the city.

The bumpers will be installed at the following eight intersections:

These locations were chosen based on collision history and severity, and bumps were already installed in July at the Finch and Sheppard locations. The rest are expected to be installed by the end of August and evaluated over the year.

“I’m confident [this pilot] will ultimately protect people walking and cycling by making them more visible to turning vehicles,” Mayor John Tory said in a statement.

“I look forward to seeing the results of this pilot so we can determine if this measure should be expanded to other locations across the city.”

According to the city, left-turn collisions are among the most prevalent in Toronto and have resulted in fatalities or serious injuries in 18 per cent of pedestrians hit and eight per cent of cyclists.

A 75-year-old woman was killed at Mount Pleasant and Merton in December 2014 after a left-hand turn. There are many seniors who live in the area, including at retirement homes.

Many drivers speed during the turn, especially in the suburbs due to wider lanes, and that combined with handling oncoming traffic, pressure from cars behind, and a windshield blindspot have resulted in many accidents.

Similar measures have been installed in New York City and Washington, D.C. and have proven effective at reducing turning speeds and the number of injuries, according to the city.

The pilot is part of the city’s “Vision Zero” plan that aims to eliminate traffic-related fatalities in Toronto.