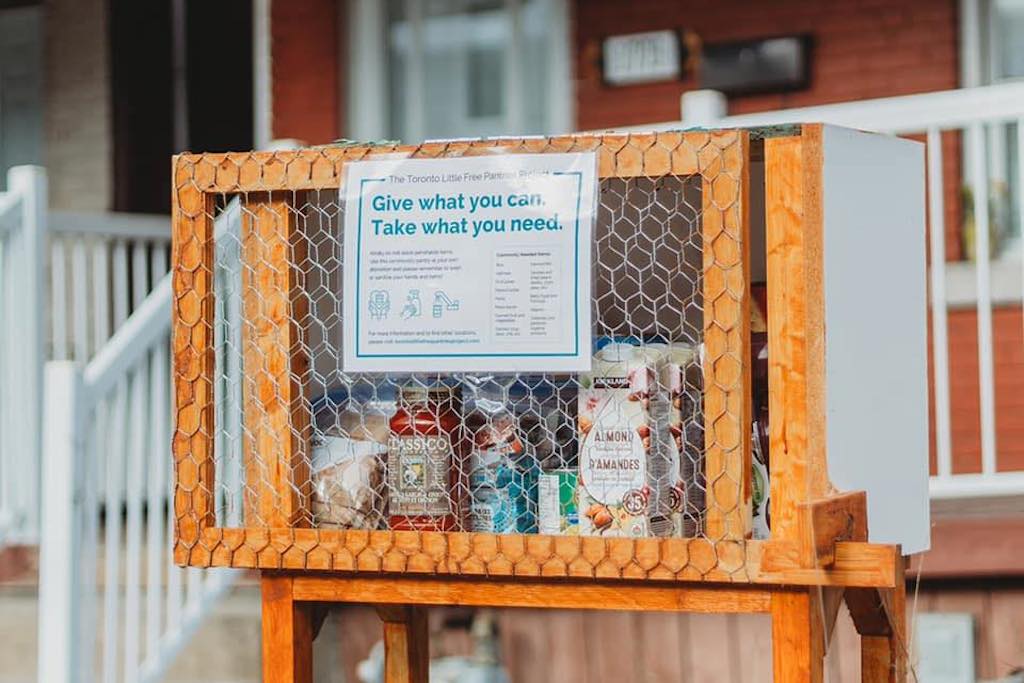 In 2016, Arkansas resident Jessica McClard built a box on a post and filled it with non-perishable foods, personal care items, and paper goods for anyone to take freely. She called the initiative “Little Free Pantry.”

Locally, the city saw its initial little free pantries beginning in 2017 when the first box was set up with non-perishable goods intended to help bridge food insecurity gaps.

Fast-forward four years and Little Free Pantry is growing rapidly in Toronto in response to the pandemic.

This past March, Little Free Libraries (free book boxes) started being transformed into pantries containing non-perishable goods stocked by people hoping to help neighbours. The current pandemic has caused the movement to spread rapidly throughout the city.

From there, a group of volunteers began leading the charge by building boxes and using social media to spread the word. Simon Strauss is one of the people making the neighbourhood pantries work, but making sure boxes of free food are stocked and widely available is not without its challenges.

“Finding enough building materials has been tricky, especially harder to find things like plexiglass. The first model that our volunteer builders made used chicken wire, but this didn’t keep out the elements, so we’re using plexiglass now. We’re also having trouble keeping up with the demand for new boxes, now that the word has spread,” he said.

To date, there are several little free pantries throughout Toronto (map here). In some areas, goods disappear quickly, requiring box owners to keep a close eye on inventory to prevent empty pantries. Strauss suggests that the best strategy for stocking the pantries is teamwork.

“We’d recommend that hosts develop a mailing list of people interested in helping to stock it, then send out calls when it is low. Given how challenging it is to find groceries these days, people often buy extra when they shop and keep it on hand in their house for when the box is running low,” he said.

Anyone interested in hosting a pantry is encouraged to build a box but can contact the group directly if building supplies are scarce or help is needed. It’s also essential to gain landowner permission, which can be an issue in some neighbourhoods.

Strauss notes that many churches and other organizations have reached out to the volunteer group to request pre-built little free pantries, which helps when serving areas in need. The group has also created printable signs in many languages with the hopes of reaching underserved communities.

While Strauss is aware that the pantries are not a replacement for food banks, he does hope that the boxes provide some relief to neighbours in need.

“The pantries are stocked with love from neighbours, and an illustration of how we’re all in this together,” he said.