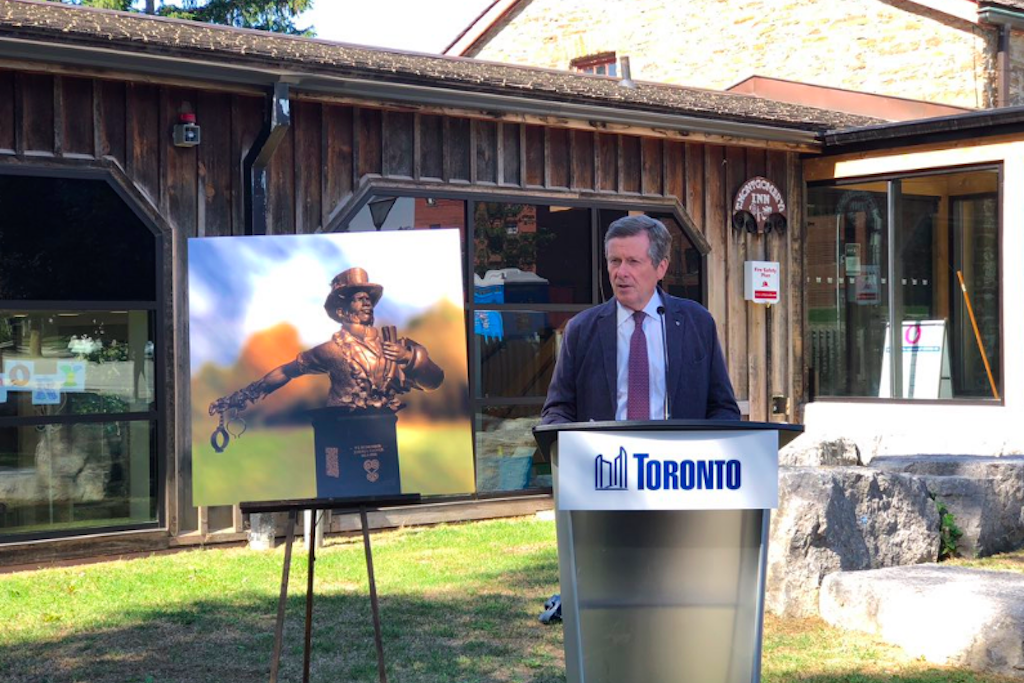 On Thursday, the City of Toronto unveiled the portrait of a memorial sculpture to be installed in honour of Joshua Glover, an abolitionist figure who escaped slavery in the United States and came to Canada through the Underground Railroad in 1854.

Pleased to join Council Colleagues and the Etobicoke Historical Society this morning to announce the winning proposal for the Joshua Glover Public Art Memorial. This memorial – created by artist, Quentin VerCetty – will be installed in 2021 in the new Joshua Glover Park. pic.twitter.com/dOi32Vd3AP

After settling in Lambton Mills, Etobicoke, Glover was employed at Montgomery’s Inn (now a city museum), and his story helped to propel the abolitionist movement.

The sculpture was designed by Quentin VerCetty, a young Black artist in the GTA, who submitted the proposal as part of the Joshua Glover Public Art Competition.

According to the city’s press statement, the sculpture draws on the events of Glovers’ life through the lens of Afrofuturism. VerCetty’s unique depiction of Glover is described as a “charismatic Victorian dandy” who gazes confidently into the future while throwing away the crushing chains of slavery with his mutilated cyborg arm.

“By commemorating Joshua Glover through this statue, we are recognizing the role that he played in our city’s history and how his actions have impacted the lives of our residents,” Toronto Mayor John Tory said. “I am proud that one of the first new public art projects to be installed as part of ArtworxTO: Toronto’s Year of Public Art will be this memorial to Joshua Glover by Quentin VerCetty. It is exactly what ArtworxTO was launched to accomplish: more public art across the city that reflects the diversity, dignity and strength of the people who call Toronto home.”

The sculpture will be installed at the new Joshua Glover Park (currently under construction) as part of the Kingsway by the River development in Etobicoke.

In July, a number of statues in Toronto were splashed with paint in solidarity with a global movement to remove monuments to slavery and colonialism and retake public spaces.

In Toronto, protestors wrote the words “defund,” “disarm,” “dismantle” and “abolish” on the sidewalk near a statue of Egerton Ryerson at the Ryerson University campus (Ryerson is believed to be one of the architects of Canada’s residential school system). Elsewhere in Toronto, statues of Sir John A. MacDonald and King Edward VII in Queen’s Park were also doused with paint.

Walkaround showing the damage done to the statue of Sir John A MacDonald at Queen’s Park in Toronto earlier today. pic.twitter.com/sy15aKMzoo

The creation of the Joshua Glover Park and Public Art Memorial aligns with the Toronto Action Plan to Confront Anti-Black Racism — specifically an attempt to increase the visibility of Black history in Toronto.