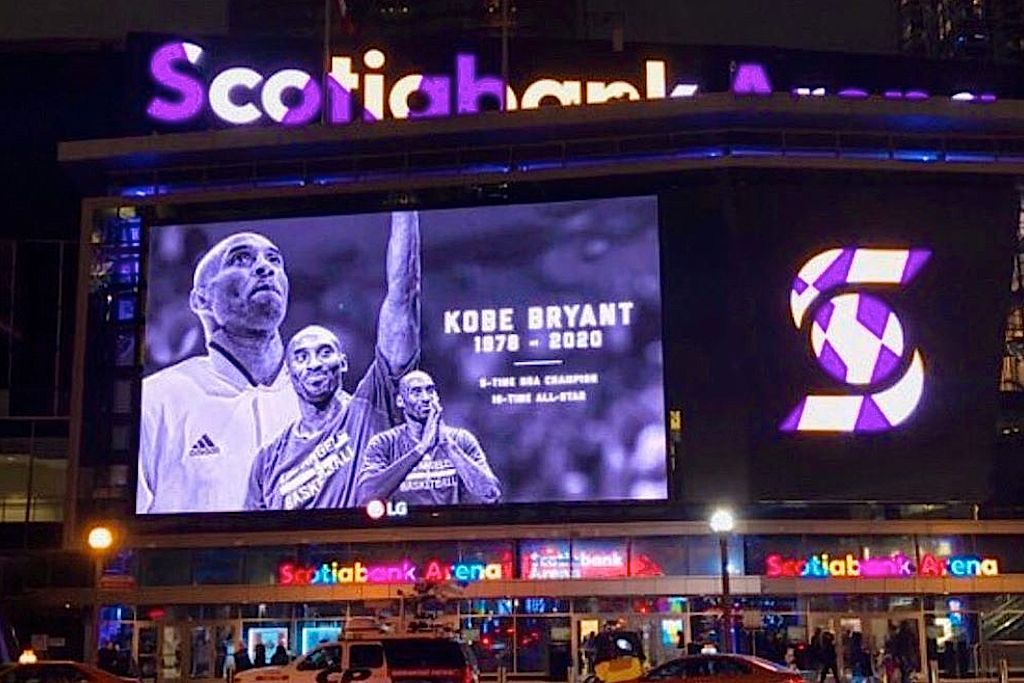 Toronto basketball fans and Raptors alike continue to pay tribute to the late NBA legend Kobe Bryant, whose tragic passing has shocked and saddened people around the world.

Bryant died in a helicopter accident on Sunday, Jan. 26, which claimed the lives of eight other people including his 13-year-old daughter, Gianna. Bryant leaves his wife, Vanessa, and three surviving daughters.

The tragedy shook the international basketball community, causing a temporary service interruption on Twitter on Sunday as people took to social media to express their disbelief and pay their respects.

The late Kobe Bryant’s impact on sports history is undeniable. Bryant played 20 seasons with the Los Angeles Lakers, was an 18-time All-Star, and was named the NBA’s Most Valuable Player in 2008. He retired in 2016.

Vigils and memorials have been planned and executed around the world, including one scheduled for Tuesday, Jan. 28. at Maple Leaf Square in Toronto.

The Toronto sign is purple and gold today in memory of one of the greatest players to ever step on the court. Toronto joins the basketball community at large in mourning the tragic loss of Kobe Bryant and his daughter, Gianna. pic.twitter.com/uSuQXziibe

At last night’s Raptors-Spurs game, which began soon after Bryant’s death was confirmed, both teams ran out the 24-second clock in Bryant’s honour. Bryant’s jersey number for much of his tenure at the Lakers was 24. The Raptors also cancelled their practice.

Both the @Raptors and the @spurs ran out the 24-second shot clock on their first possession of the game in honour of Kobe Bryant. pic.twitter.com/JhD8XVUGFo

Raptors players posted their own personal tributes to Bryant on social media, including Serge Ibaka and other NBA basketball players such as Shaquille O’Neal.

Fans created memorials for Bryant after the news broke, including several at Jurassic Park. The big screen at Scotiabank Arena, across from the park, also displayed a tribute to the Lakers’ legend.

Toronto honors Kobe Bryant. A fan left photo/candle/flowers in Jurassic Park where big screen pays tribute to Lakers legend. The Raptors cancelled practice today & issued statement that includes “…we are deeply saddened at the loss of one of the greatest players in our sport” pic.twitter.com/dDzEqTU3g8

Last night, the CN Tower was lit up in purple and gold, the colours of the Los Angeles Lakers, in Bryant’s honour.

Drake also posted his own tribute to Bryant on Instagram, stating his disbelief at the shocking death.

A public memorial in Toronto is planned for 10 a.m. on Tuesday, Jan. 28. It is currently scheduled to be held at Maple Leaf Square (otherwise known as Jurassic Park), located at 15 York St.