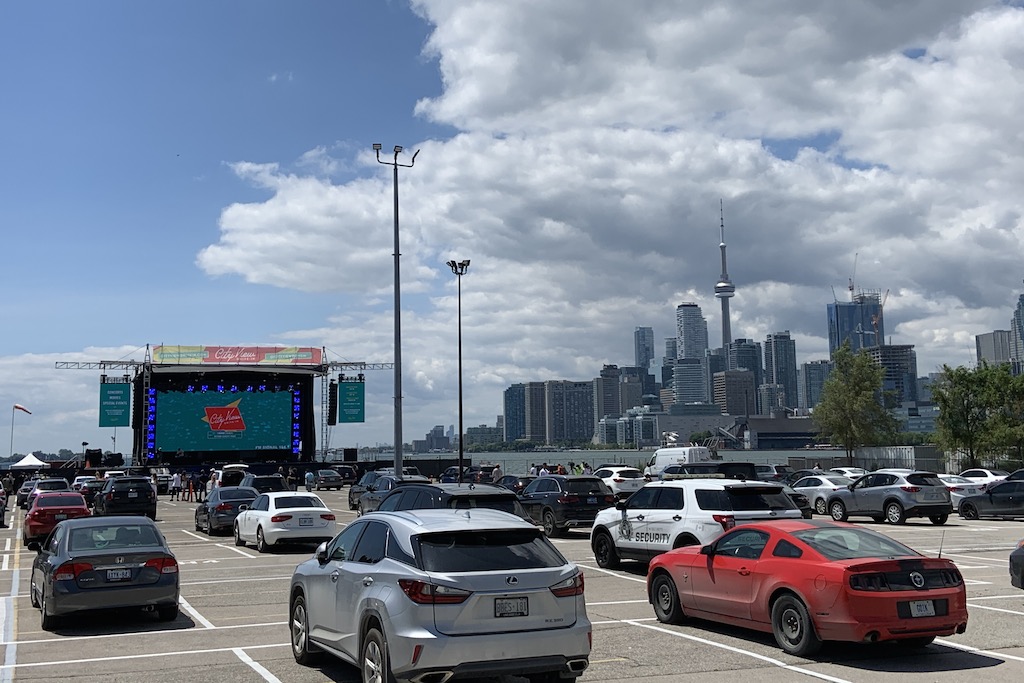 Guests and members of the media got a chance to check out the new facility on July 14, two days before the venue comes to life in a very loud way when it plays host to the band Monster Truck on July 16 followed by Rayman on July 18.

The venue, essentially a converted parking lot located directly across from Khabouth’s Rebel nightclub on Polson Street, can accommodate 214 cars and as many people to a car as there are seatbelts.

All parking spaces are reserved by purchasing tickets before the events, there is no general admission.

At events, there will be food trucks on hand to provide refreshments via an app. Customers can pay online or tap when the food is delivered to their vehicle. But, there is no leaving your vehicle except to use the washrooms, which are located inside Rebel.

The stage has a state of the art audio and video system, according to Khabouth.

“We’ve all had in our lives, I think globally, like a dark spot,” says Khabouth. “I know myself especially in our business it’s been very dark and very sad, but I’m excited and more importantly very happy to be living in Toronto and be a part of Toronto. For that reason, we are able to do what we are doing today.”

Mayor Tory was on hand because the city had a hand in funding the new venture, specifically so that the CityView can be used to host some of the cultural programming that the city has had to cancel due to the COVID-19 pandemic.

“It allows for the exposure of some of these film festivals such as the Inside Out LGBTQ Film Festival and the Regent Park Film Festival,” Tory says. “And it allows local filmmakers and other communities to celebrate film and experience this.”

The venue, although independent, is included in the city’s new DriveInTo program being rolled out at four spots to provide some entertainment relief to local residents. The three other venues in the program are Ontario Place, Downsview Park and Sherway Gardens. Tory says residents can expect a similar experience at all four locations.

Musician Allan Rayman’s concert is nearly sold out, according to those in attendance. And Rayman, for one, is looking forward to the experience.

“I’m looking forward to performing to a bunch of cars, it’s a whole new canvas,” he says. “I couldn’t be more happy to be here.”