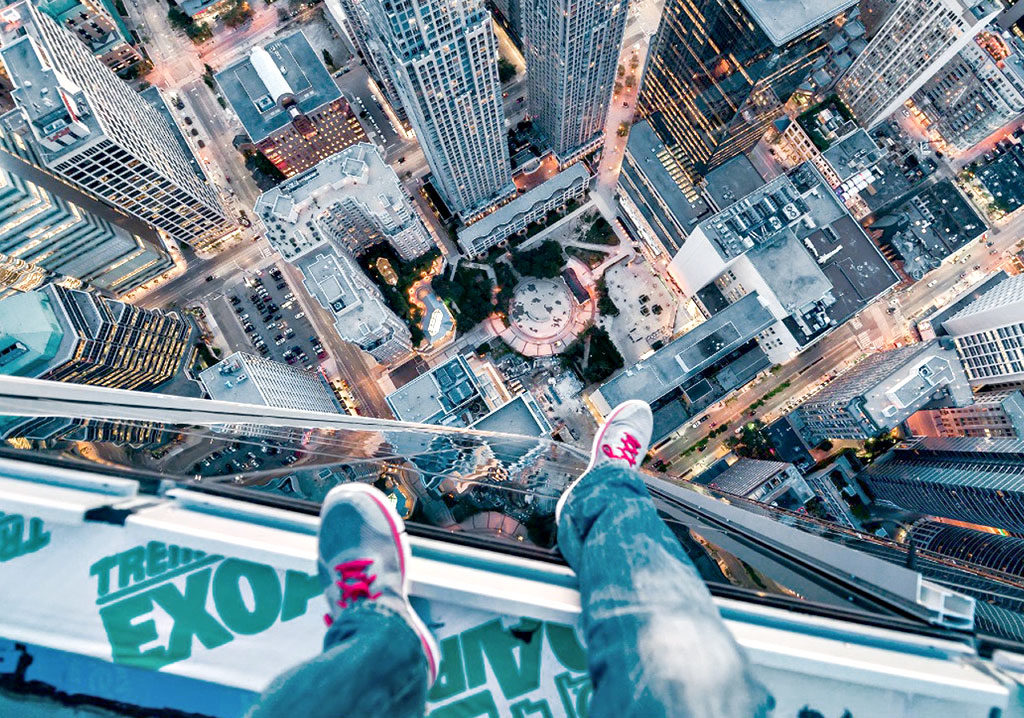 The image of a man walking across a tightrope between two tall buildings in Toronto is enough to send shivers down the spines of most mortals.

Other rooftopping images show a city alive and full of light: fast and vibrant, and all captured while someone stands precariously atop a building  — often under construction — with little more than balance preventing a plummet to the ground below.

This might not be everyone’s idea of a good time, but for the newest breed of urban photographers it’s the best way to capture a city and the interest of followers. There is perhaps no one who understands this art form better than Tom Ryaboi. A local photographer, not yet 30, Ryaboi has climbed as high as 1,000 feet and is best known for his bird’s-eye view photos and time lapse videos taken from atop skyscrapers.

“As I’ve grown older and picked up a camera, I’ve noticed people get a thrill out of these photos. That’s why I share them,” Ryaboi says. “However, I don’t do this for others. I would be doing it with or without a camera.”

Rooftopping, or urban climbing, is the act of climbing to the tops of tall buildings, by whatever means possible. The art is capturing the view.

“It’s pretty quiet, when you’re on a roof of a building at any time of day or night — the only real sound that travels up from the street is sirens’ ,” Ryaboi says. “Good place to think.”

But slacklining — arguably more dangerous as it involves balancing on a tightrope between buildings — has also become more popular and is causing concern for building owners and Toronto police.

“If someone is caught by security or landlords, we will respond to the call and they could possibly be arrested and charged,” Toronto police constable David Hopkins says. “The act of taking a photograph or standing on a rooftop is not illegal,” says Hopkins, who explained it’s the actions taken to get on the rooftop that could be a crime.

Ryaboi maintains he has not broken any laws (he “might bend them occasionally”) and that rooftopping is no more dangerous than jaywalking.