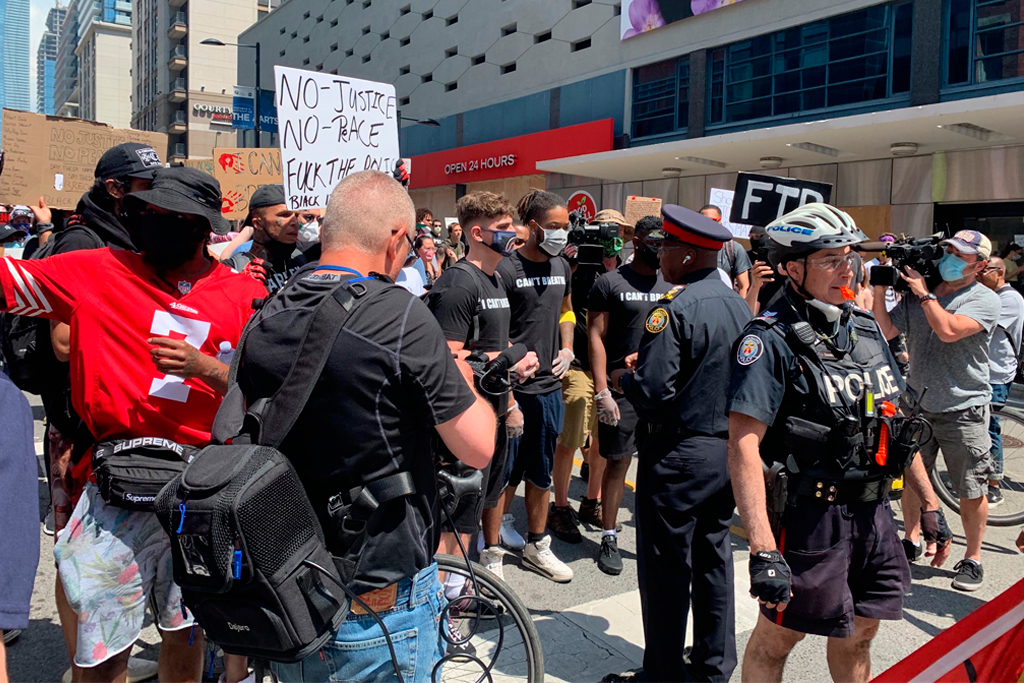 Hundreds of protesters held signs and chanted “I Can’t Breathe” and “Black Lives Matter” in reference to last month’s killing of George Floyd, a 46-year-old African-American man who died in Minneapolis, Minnesota, after a white police officer knelt on his neck for almost nine minutes.

Toronto Police Chief Mark Saunders and several other officers were present. They were seen taking a knee at Yonge and College in a show of solidarity with the protesters.

My Command and I met protesters today and we took a knee. We see you and we are listening. The ⁦@TorontoPolice⁩ fully supports peaceful and safe protests this weekend and always. We have to all stay in this together to make change. #Toronto #PeacefulProtests pic.twitter.com/XM9Xd64irS

At a news conference on Thursday, Saunders said he expected the events to remain peaceful.

Since Floyd’s death, there have been, mainly peaceful, protests all over the world, though some did lead to riots.

As a precaution, some businesses in downtown Toronto boarded up their windows to prevent potential looting.

A chunk of downtown is a wall of wood as stores/businesses board up windows/doors in advance of planned protest today & more tomorrow.
🎥 @680carl #StreetsOfToronto #Toronto pic.twitter.com/2xmtUOhDMS

The protest, organized by March for Change, included the hashtag #BlackLivesMatter in their Instagram posts, but Black Lives Matter Toronto tweeted that they are not affiliated with the march.

Black Lives Matter – Toronto (BLMTO) has NO involvement in the organizing of any of this weekend’s upcoming actions and marches. We believe in Black people mourning, grieving, and protesting however works for them & hope everyone look out & care for each other. #BlackLivesMatter

Organizers warned that since the Emergency Act is in place, participants of this protest would be required to identify themselves if charged with breaching an emergency order during the COVID-19 outbreak.

“Failing to correctly identify oneself carries a fine of $750 for failure to comply with an order made under the EMCPA, or $1000 for obstructing any person in exercising a power if a provincial offences officer issues a ticket,” organizers warned in an Instagram post.

A post shared by TheMarchForChange (@themarchforchange) on Jun 4, 2020 at 2:34pm PDT

“We all have the responsibility to make this a peaceful and safe protest,” organizers stated in a post.

There’s not much background information about March for Change, but organizers provided a number and link to the Movement Defence Committee (MDC) — an autonomous working group of the Law Union of Ontario — in case protesters get arrested or separated from the group.

A post shared by TheMarchForChange (@themarchforchange) on Jun 4, 2020 at 3:02pm PDT

The lack of information about protest organizers prior to the event left some social media users somewhat suspicious.

Heads up to #Toronto folks but #marchforchange has some serious red flags. It’s not a known organization (no NABL or BLM connection), they want your email/personal info and the route passes by at least 2 police stations. Stay safe and don’t attend anything without transparency! pic.twitter.com/1HV0tWOvpe

Between big businesses being told to board up this weekend, brick piles being placed around the downtown core, and protests organized by unknown groups that haven’t included BLMTO, this smells like anarchy.

Still, many showed up to show their solidarity. For more information, visit the March for Change Instagram page.