Toronto protesters push for electoral reform, but who needs that? (A satire, in case it isn’t obvious) | TRNTO.com
Skip to content 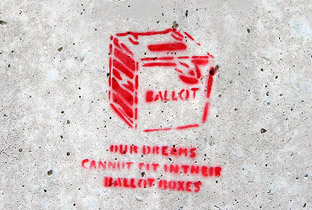 Saturday was National Day of Action for Electoral Reform, which saw protesters gather at Queen’s Park and across the country to push for an alternative to the current first-past-the-post voting system. Their argument? Something about the Conservatives having won a majority with only 39 per cent of the vote. But really, who cares what 60 per cent of 14,720,580 voters chose? Here are seven reasons why we don’t need electoral reform.

2. Votes which didn’t elect anyone should be ignored, because they are, by definition, loser votes.

3. If people’s votes actually counted, more people would be encouraged to vote, which means it would take longer to count the ballots, which could mean paying overtime, which could mean elections would become even more expensive.

4. The first-past-the-post seems to work just fine for the Olympics, so it’s gotta be good enough for politics.

5. Proportional representation could take the edge off of attack ads, which are the most entertaining part of any election.

7. We’ll get another chance to vote soon anyway. Stephen Harper’s generously given us three elections in six years, so surely he’ll call another one soon. Right? Right?