Restaurant review: Faim de Loup is good but could be great | TRNTO.com
Skip to content 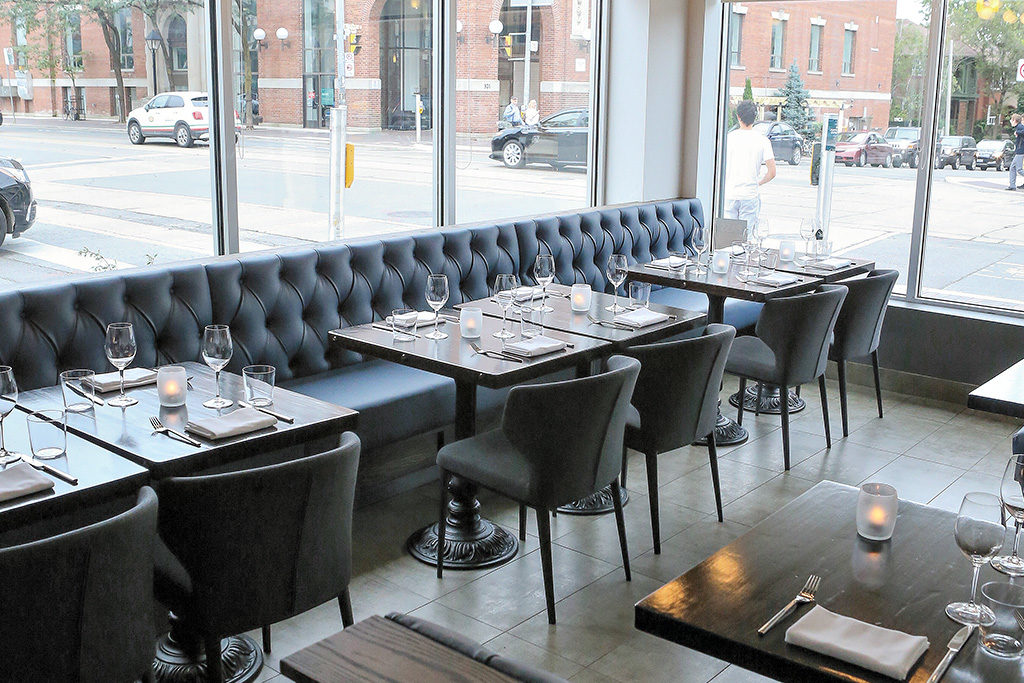 I made a Béarnaise sauce this summer. The tarragon in the garden was in great shape, there was a steak in the fridge and asparagus for dipping in the sauce. Béarnaise sauce is a major commitment.

First there’s the whisking. Almost half an hour of sheer elbow grease. Speaking of greases, there’s the animal fat: Béarnaise, which is simply hollandaise built on shallots cooked down in red wine vinegar, plus fresh tarragon. Which means butter. And egg yolks. In embarrassing and very unPC amounts.

That’s French cooking for ya.

And I can’t help loving it despite what all that butter does to me.

While I was dining at the new Faim de Loup (hungry like the wolf), a cute little boîte at College and Dovercourt, I hear the waiter declaiming over the resto’s Béarnaise sauce to the peeps at the next table. He’s a declaiming sort of guy, which I would prefer toned down. But hey, I guess when you’ve captured diners for a five-course prix fixe for $80 or a seven-course prix fixe for $100 (booze extra), you have permission to declaim.

It’s a pretty little place — 16 seats! The chef/owner is Jeffrey Yap, who cut his teeth at Scaramouche, and at his best moments you can taste it. At his less than best moments the food is sophomoric. The Foxley river oyster (PEI) with picked shallot was a great oyster till it drowned in pickle juice. Blanching radishes, however pretty, takes away their bite, which is all radishes have. Adding pickled pearl onions reminds one too much of the unfortunate oyster, and the pile of croutons fried in duck with a side of brown butter mayo is de trop in the grease department.

Had dinner begun with the BC black cod in a smoky broth of bacon and pork fat, with an update of cassoulet featuring white beans with chives and pork crackling, we would have been in heaven à la française. Then they brought bread. Better late than never. I forgive the late. I forgive the no bread and butter plate, because the house-made bread is so marvellously crunchy, I’m in love. I forgive the no spoon for the broth because the broth is so adorable.

Then chef goes in for the big kill. His savoury porcini cake is intensely fungal, not sweet, a savoury moist hit of pleasure. It comes with intense dots of garlic purée, raw red veined sorel, kale leaves and dehydrated kale powder, oyster mushrooms and puffed wild rice. Kinda great. As is chef’s riff on duck a l’orange. Rare thick duck breast is a lily gilded with citrus relish and deeply caramelized celeriac. Pooling around these delights are two sauces: Sherry vinegar gastrique is when you boil down the vinegar with sugar till it’s syrupy, and add buttloads of butter. There is also — and why not? — a Cointreau-spiked duck jus with … more butter.

In the French manner, they cleanse the palate with a granita of sweetened basil and mint. Dessert, no surprise, is deconstructed. Peach pie taken apart becomes a bed of panna cotta topped with (too much) mint beside peach compote, with a slice of nice crispy pastry. It works.

This guy, Jeffrey Yap, working alone in his open kitchen, with the intensity known only to those who have risked everything on a venture, deserves to make it. He only needs a little tuning and 16 people a night.