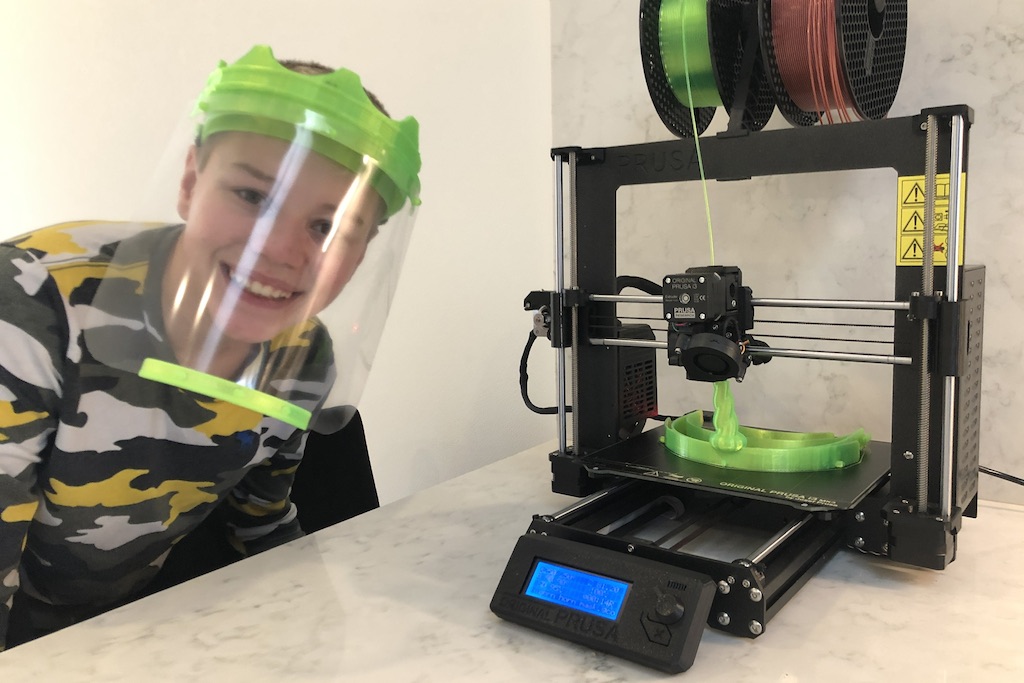 A north Toronto student has been using the 3D printing skills he learned in school to create face shields for frontline health-care workers — with a twist.

When 13-year-old Upper Canada College student Warren Richmond-Kalaci saw that the company of the 3D printer he owned, Prusa, had put out a design guide for printing face shields, he decided to give it a try.

Richmond-Kalaci started learning about 3D printing in a design class in Grade 6 and loved it so much that he asked his parents for a 3D printer as a graduation gift. As he began printing the face shields, he was thinking about the kinds of patients who would be interacting with the health-care workers wearing these shields daily, in particular at SickKids Hospital.

“I was trying to empathize with the kids at the hospitals and figured it would be very scary to see one of those large masks,” he says. “So that’s when I started designing the novelty masks.”

These novelty face shields use fun and colourful designs, some with sports logos or superhero symbols, along the bottom and the top of the shield.

To come up with the different designs, Richmond-Kalaci used a design technique he learned in school called “crazy eights” that helped him generate as many ideas as he could in a short amount of time.

“My first design was a crown, but we haven’t been using that much because it uses a lot of filament,” he says, referring to the material he uses to build the design parts that attach to the shield.

“My mom is obsessed with unicorns and wanted me to make a unicorn one, but then SickKids said they couldn’t accept it because it was too sharp,” he laughs.

“It sort of dawned on us that he was doing superheroes for the heroes! But we didn’t really understand that until the day before when we were assembling them in the kitchen,” she says.

Richmond-Kalaci had come up with designs such as the Batman symbol and the Avengers logo for that purpose.

He says he’s been fortunate to have a lot of support from friends and family, including one of his hockey coaches, Dave Kennedy. When his coach heard what he was doing, he set up a GoFundMe page to help raise funds for Richmond-Kalaci to be able to buy enough material to keep making the shields.

“When he set up the page, he made it where if you donated, you would be sent the link to a goalie training class,” Richmond-Kalaci says.

The GoFundMe page raised over $6,500, and so $1,500 went to Richmond-Kalaci for production costs, and then Kennedy wrote a cheque for $5,000 to go to SickKids Hospital.

Not only has Richmond-Kalaci been able to help those working on the front lines to fight COVID-19, but he says this experience has really improved his 3D printing skills. He even received some files from one of his teachers at the start of the process to use with the 3D printer.

Richmond-Kalaci says his process for the project has been pretty simple so far. “Just set a reasonable goal and shoot for it, and then just keep going,” he says.