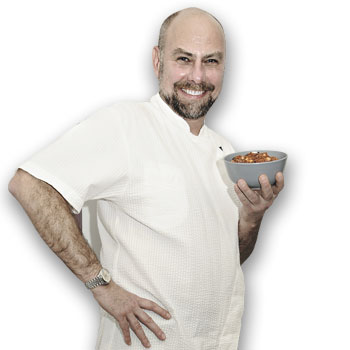 Mexico? Nope. Chili, believe it or not, came by way of 18th-century Spanish explorers who wound up in Texas looking for a cheap and hearty way to fill their bellies. So who better to find the best chili in Toronto than the chef of Cava, whose Spanish-influenced cuisine is among the city’s best? The seven-bean (we counted) veal beef chili from McEwan proves most formidable, with its tenderly cooked beans, abundant vegetables and proper attention to detail. “By far the best, and the most sensitively seasoned. There are no flaws. And I like the chick peas — makes me feel like I’m eating something healthy,” says McDonald. “This is a good drive-your-wagon-throughthe- centre chili … closest to what most people consider chili to be,” says McDonald. A gentle heat, a touch of cumin, subtle acidity from the tomato and a smoky edge elicit the word “fetching” from McDonald’s lips. “I would love to give this first place,” says McDonald. It’s got the most exciting meat flavour of the bunch, but “it’s not chili, more like BBQ in a bowl.” Plus, there’s not enough “room” in the dish. “It’s like music. The rests are as important as the notes.” And the more you eat….

“Certainly the most colourful of them all. Big chunks of vegetables — peppers, sweet potatoes and things. It’s nicely seasoned and has a good acid kick from the tomatoes,” says McDonald, who likes the light vinegar tang but finds the veggies a touch undercooked. “This is unusual because it’s made with lentils, which I wouldn’t expect to find in a chili, and the lentils are underdone,” says McDonald. “It is quite lean, fresh and healthy. I just wish they had cooked the lentils a little bit more.” A healthy fifth place.