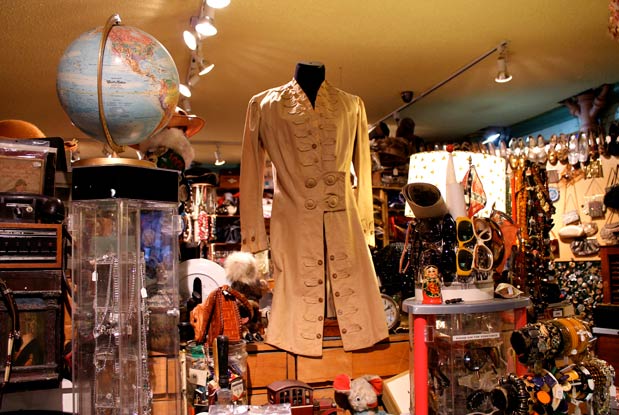 The Internet has been all abuzz with Toronto’s vintage scene as of late. Fashion folks from abroad have been stopping by and gushing over our boutiques, allowing the world at large to finally sit up and take note (though fashion insiders were already in the know). With new vintage shops popping up regularly, we decided to round up the city’s most notable vintage emporiums.

Walking into this east end shop may at first be a bit overwhelming to some: trinkets and tchotchkes are perched on every surface; clothes hug one another tightly on racks; jewellery twinkles and beckons from behind glass cases; books are squeezed haphazardly onto shelves. Gadabout has it all — and if it doesn’t, owner Victoria Dinnick will find it for you.

Carrying garments from the late 1800s to the 1970s, the collection of goods takes over two storeys. A men’s section is housed in an upstairs nook, while — due to their extremely delicate nature — most of the Edwardian and Victorian pieces are kept offsite. Garments are arranged by size, easing the search process. 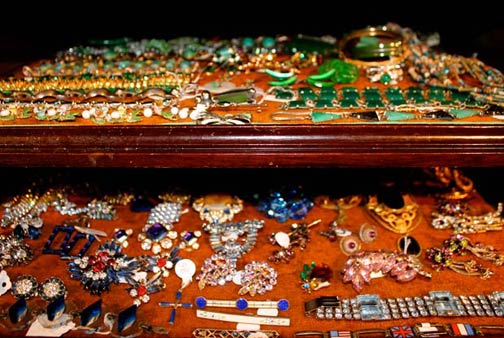 Tucked away on the second story of a Yorkville building, Carmelita Blondet’s vintage boutique brings a Parisian boudoir to mind, despite its fairly expansive size. Colour-coordinated racks are filled with endless eveningwear options, while mannequins appear to be readying themselves for the most glamorous of galas; the experience is akin to stepping into the past.

In business since 1972, the effervescent Blondet is a true vintage collector. Sourcing from around the world and eagerly sharing the history of each piece, she never fails to point out details (such as Bakelite buttons) that may otherwise go unnoticed. In the back room, Blondet showed us a ‘60s silk couture dress from the original Ritché Bridal collection ($3,000); up front we admired a ‘50s hand-beaded hunter green velvet jacket from the Andes, in Blondet’s native Peru ($1,400).

A baby blue coat from the much sought-after Elsa Schiaparelli has a mink fur collar ($899), while a canary yellow wool jacket – featuring gold and black buttons – hails from Allumette in Paris, though it certainly has a Versace feel to it ($899). Meanwhile, the belle of the ball will likely be drawn to a silk taffeta gown from 1940s France; decorated with beads, sequins and crystals — in addition to having a lace-up back –—it is utterly breathtaking ($3,000).
128 Cumberland St., Upper Level, 416-324-9759 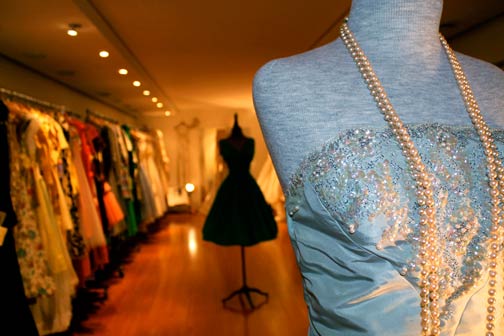 Kensington Market is Toronto’s original vintage destination, with tons of shops dotting the narrow streets hawking affordable vintage gear. However, Roger D’Souza truly is the King of Kensington. In business since 1997, D’Souza owns — and does all the buying for — three shops in the neighbourhood: Flashback, Flashback II and, of course, King of Kensington.

While Flashback is filled with the most affordable goods and King is dedicated to menswear, we headed to Flashback II to seek out some of the higher-end pieces for both ladies and gents. We were shown a delicate cream lace dress from the ‘20s ($500), as well as an amazing Victorian feathered hat that circles the head, fanning out into a starburst shape ($70). Covetable accessories include some on-trend Lucite purses — we liked a pearlescent one with a gold latch and chain ($100)—in addition to some flower-shaped porcelain earrings from the ‘60s ($15).

Both men and women can snatch up some Hudson’s Bay Company coats starring the instantly recognizable stripes ($130), while brown suede bombers from the ‘40s make for a nice reprieve from plaid ($65). Gents can also snag some smart accessories: ties ($15), Western-style leather belts ($25) and a pair of amber cufflinks ($45). Footwear is also available: we admired some Victorian white lace-up boots for women and a black buttoned pair for men ($125).
33 Kensington Ave., 416-598-2981 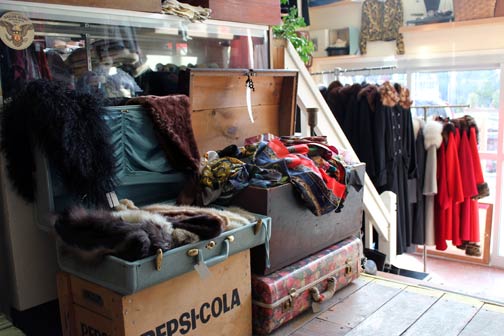 After working at Kensington’s Flashback Vintage for years, Kealan Sullivan decided to branch out on her own, bravely setting up shop on West Queen West, pre-gentrification. Nine years later, 69 Vintage is one of three stores she owns, with 69 Vintage Collective/Buy The Pound hiding out in Blansdowne, while Sullivan’s more fantastical foray — V by 69 Vintage — sits around the corner from Trinity Bellwoods.

The original store is filled with the most wearable finds, with picks for both ladies and gents, and a solid shoe selection. Cowboy boots, plaid shirts and jeans are a given for the guys; girls can nab plenty of stuff with a tinge of the west — Sullivan has a bit of a soft spot for what she dubs ‘pioneer style’.

A pair of brown leather shorts ($50), a black skirt starring brightly coloured flowers (that could easily morph into a shawl) ($60), and a leather vest boasting a handsome fringe ($70) all caught our eye. We were charmed by a lightweight jacket from Mexico spotlighting a dancing duo on the back ($60). In the men’s corner we discovered a  wool sweater complete with contrasting leather pockets ($250), and a pair of lumberjack pants — only for the man who’s not afraid of making a sartorial statement ($65).
110 Queen St. W. 416-516-0669 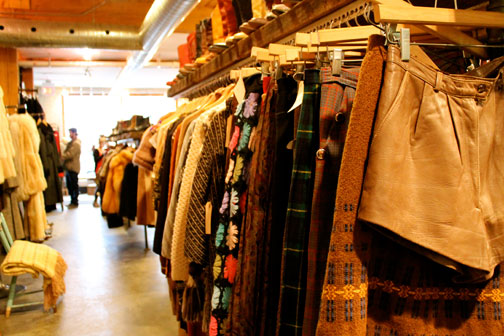