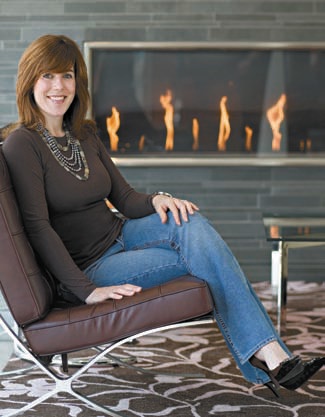 THE POLICE OFFICER approaching in the rearview mirror does not appear amused. Sarah Richardson and crew have been filming on a country road some undisclosed number of miles north of Toronto, and apparently driving on the wrong side of the road with a camera strapped to the hood of the car isn’t in keeping with the local rules and regulations.

Just as the siren starts to blare, Richardson pulls over, hops out and bounds toward the officer. Since standard procedure just about anywhere in the world is for the offending driver to stay in the vehicle with two hands visible, the officer might be justified in pulling his weapon. But celebrity has its benefits. "Sarah!" the man in uniform exclaims. "Can I take a picture? My wife is a big fan!"

She’s not the only one. If workload is a reliable gauge, Richardson, 37, is among the most popular of the many interior designers plying their trade on TV. Sarah’s Cottage, which played all through May, was Richardson’s fifth television series. Room Service, design inc., Sarah’s House and Sarah’s House 2 came before that, and she’s already in talks for a sixth series. Richardson also writes a frequent column for the Globe’s Style section, co-owns her production company and designs furniture under her eponymous brand.

When she’s not exciting the rural police force, Richardson is at home in her midtown neighbourhood with her husband and two girls. "I love the trees, I love the quiet of the neighbourhood," she says. "There’s lots of weekends where I park my car on Friday after work and don’t get back in it until the next Monday."

As a business owner, Richardson appreciates the extent to which local independent businesses rely on the neighbourhood to stay afloat, especially given the tumult of the current economic climate. She makes an effort to shop at Midtown shops whenever possible.

Richardson’s own business fortunes might appear similarly tenuous. Among the various home makeover shows, from Trading Spaces to Extreme Home Makeover and While You Were Out, hers is the most vanilla in concept: She overhauls a house, room by room, then sells it. That’s about it. No swapping homes with wacky neighbours, no hurried revamping while the spouse is out golfing, no arbitrary dollar limit.

That she has now completed 220 episodes over nine years ("That’s a lot of paint, I gotta tell you," she says) speaks to the force of personality at the heart of the enterprise.

Indeed, there’s no mistaking who’s in charge here: on just about every product and operation she’s got. But she’s fully aware of the risks of making her business and identity one and the same. "My name’s on the door, it’s my show, it’s my reputation on the line, and I’m also a co-owner of the production, so the stakes are pretty high," she says.

A pretty big gamble for someone who isn’t even formally trained as an interior designer. But then again, in a way she’s been prepping for the biz her entire life. As a kid growing up in Toronto, whenever she was sent to her room (which wasn’t that often, she points out), "I would just rearrange my furniture," she says.

After graduating from Havergal College, those instincts led her to the University of Western Ontario where she received a BA in visual art, with a focus on studio art and history of art.

As luck would have it, after graduation, Richardson received a call from a university acquaintance asking if Richardson would work as a prop stylist on her show. The reason? "[She] remembered that I always had really nice apartments in university and enjoyed throwing dinner parties and making my apartment nice more than I enjoyed school work," says Richardson.

The job gave her the behindthe- scenes knowledge that’s so vital to her job today, she says.

Not long after, National Post columnist and childhood friend Amoryn Engel, who was working as a segment producer for a design show called Real Life on the Life Network, came calling with a desperate request. She needed an engaging, energetic personality to lead a craft design segment. Richardson had never been on camera, but Engel had a feeling she’d do just fine.

"When I used to book talent at ABC News, they used to ask, ‘Is the person a 10-talker?’ And if they weren’t a 10-talker, they didn’t want them," recalls Engel. "Sarah was a 10-talker. And here in Canada we don’t have many of those."

Richardson nailed her segment, says Engel. "I remember [the producer] was like, ‘Wow. That girl is going to go places. She was amazing,’" she says. "We had never had a guest on like her. So from there, she became a regular, and we kept telling her, ‘You should be doing this with your life. You are amazing. You should have your own show.’"

And so in 2000, Room Service was born. Of the original design assistants from that show (most of whom are still with Richardson), the colourful and snappydressing Tommy Smythe is probably the most recognizable. Smythe serves as Richardson’s onscreen muse and creative counterpoint, and while the two bicker and cajole for the cameras, they share a very close relationship when the cameras are off.

In fact, when we catch up with Richardson over the phone, she’s in the car with her trusty sidekick, on the way back to Toronto. Just as Richardson is about to launch into a description of her husband, the charmingly fey Smythe, 38, chimes in: "Two husbands!"

"Yes, I have two husbands," says Richardson with a laugh. "Alexander is evenings and weekends; Tommy is days."

For the record, Alexander (her real husband) runs a marketing agency in the same building as Richardson’s HQ at Queen and Jarvis. His firm is on the second floor, hers on the first. The arrangement makes work very much an extension of home — and all that that brings. A few weeks back, for instance, Richardson told Smythe she wanted to discuss the details of a project, so she led him outside so they could chat while she Windexed the front door. "That’s just her," says Smythe. "She is certainly not above doing everything and anything she would ask somebody else to do," he says.

Which is important because, by the sounds of things, there’s lots of work to be done. The current project, Sarah’s House 3, has Richardson and team fully occupied renovating and restoring a rural Ontario century home — though not without their run-ins with the long (and shameless) arm of the law.