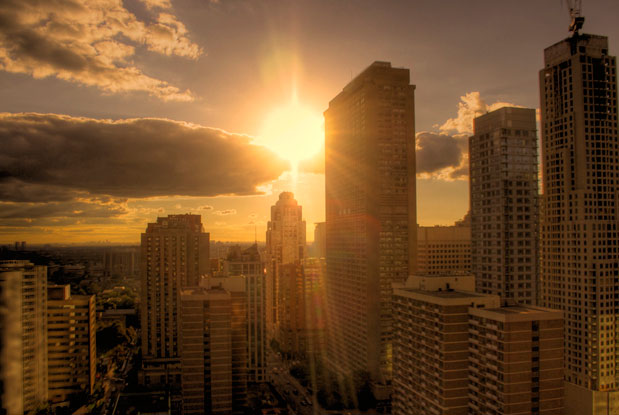 There are many ways in which the GTA is making great strides toward becoming a world-class sustainable city. In the past year alone, we’ve seen many initiatives to create more green space, ban environmentally hazardous products and practices and generally make our city a healthier place to live. What’s most encouraging is that many of these projects are starting at a grassroots level, proving individuals can indeed make a lasting difference.

Unfortunately, it’s not always good news when it comes to our environment. Many proposed developments have the potential to affect our communities in negative, even catastrophic ways, and many existing buildings pose threats to our native wildlife. But that’s not to say we’re doomed. There is always an opportunity for citizens to speak up and make a difference.

A park in the heart of the city
Last year, we celebrated the designation of the Rouge as Ontario’s first urban national park. This spring, the David Suzuki Foundation announced that it is aiming to bring nature even closer to home for residents of downtown Toronto. Inspired by authors Richard Louv and Douglas Tallamy, the foundation has embarked on a mission to establish “Homegrown National Park” in the heart of the city by creating a vibrant green corridor following the former path of Garrison Creek, one of Toronto’s most important lost rivers. Working with existing community organizations and local residents, the project is expected to help enhance, restore and create urban green space throughout the corridor — roughly the area between Dovercourt Road and Bathurst Street, stretching from Dupont Street to the waterfront. Participants will get their hands dirty by planting native trees and shrubs, cultivating bird- and bug-friendly gardens and growing food in backyards and balconies.

Power to the (park) people
Since forming a couple years ago, Toronto’s Park People has blossomed into a network of 80 parks groups across the city. Its mandate is to inspire new innovations in the use of public space and to make great parks accessible to all Torontonians. From installing outdoor brick tandoori and pizza ovens to hosting farmers markets and a litany of cultural festivals, more and more neighbourhood parks are becoming dynamic, vibrant hubs. And the good news continued last month with the announcement that the Garfield Weston Foundation will be supporting innovative new projects with $5 million in funding over the next three years. Watch for exciting things to happen in a park near you.

Appreciating urban dwellers
Did you know that jumping spiders, red fox, brown trout, fluttering Baltimore checkerspots and flocks of whimbrels all call Toronto home? You can find out more about these urban species and more in the City of Toronto’s amazing new “Biodiversity in the City” series of booklets that was released last year. The series is intended to help cultivate a sense of wonder and appreciation for the many critters that live alongside us. The booklets can be downloaded and are available at your local library.

Walking the line
Last year, it was discovered that Enbridge Inc. has plans to pipe oil from Alberta’s tar sands through Ontario using Line 9, a 38-year-old pipeline that runs through some of the most densely populated parts of Canada. According to our colleagues at Environmental Defence, tar sands oil is like “hot liquid sandpaper,” which makes it more hazardous, more likely to cause a pipeline leak and harder to clean up than conventional oil. Line 9 runs through 115 communities, including parts of Toronto and Markham, and crosses dozens of major rivers draining into Lake Ontario and the St. Lawrence River, putting the drinking water of millions of Canadians at risk. In spite of these hazards, the Line 9 project has been exempted from a full environmental assessment. I encourage residents to join the concerned Canadians calling for a full environmental assessment and public hearings into this risky project.

No fracking way
As John Sewell noted in his column for Post City this past winter, the controversial process of  “fracking” has come close to home. In fact, many local residents are now heating their homes with natural gas piped from the U.S., where fracking has become commonplace. Fracking, or hydraulic fracturing, is the process of injecting millions of litres of water and sand — along with thousands of litres of chemicals — underground at very high pressure to fracture shale rock and extract deposits of natural gas. While our southern neighbours are fracking their way across New York, Ohio and Pennsylvania, it is unclear how much is happening in Canada. There is currently no federal legislation governing fracking and each province has different schemes for water and drilling permits. Several groups, including the Council of Canadians, are mobilizing support against fracking in Canada. Last fall, they delivered petitions to the federal ministry of the environment signed by nearly 10,000 calling for a moratorium on fracking.

Reflecting on bird deaths
Did you know that Toronto buildings are estimated to kill at least one million birds each year? Unfortunately, our feathered friends pass through the city during migration and are drawn toward lights within the buildings and reflective outer surfaces on lower floors. The good news is that property owners are starting to take action to make their buildings more bird-friendly. Ecojustice lawyers took Cadillac Fairview, one of Canada’s largest commercial property owners, to court for birds killed at its Yonge Corporate Centre building complex. While the company was ultimately acquitted, the case has set an important precedent that will protect birds in future. And Cadillac Fairview has already taken steps to prevent bird collisions by applying a film to windows on the lower floors of the complex.

In summary, while Toronto has seen some good, some bad and some ugly again this year, I am truly excited about the many efforts that are connecting residents with nature in their neighbourhoods. Projects such as the Homegrown National Park, urban agriculture big and small and efforts to enhance the city’s green spaces and protect its inhabitants show that Toronto is on track to have an unprecedented green boom this year. I encourage you to get involved. Help bring nature home in 2013.