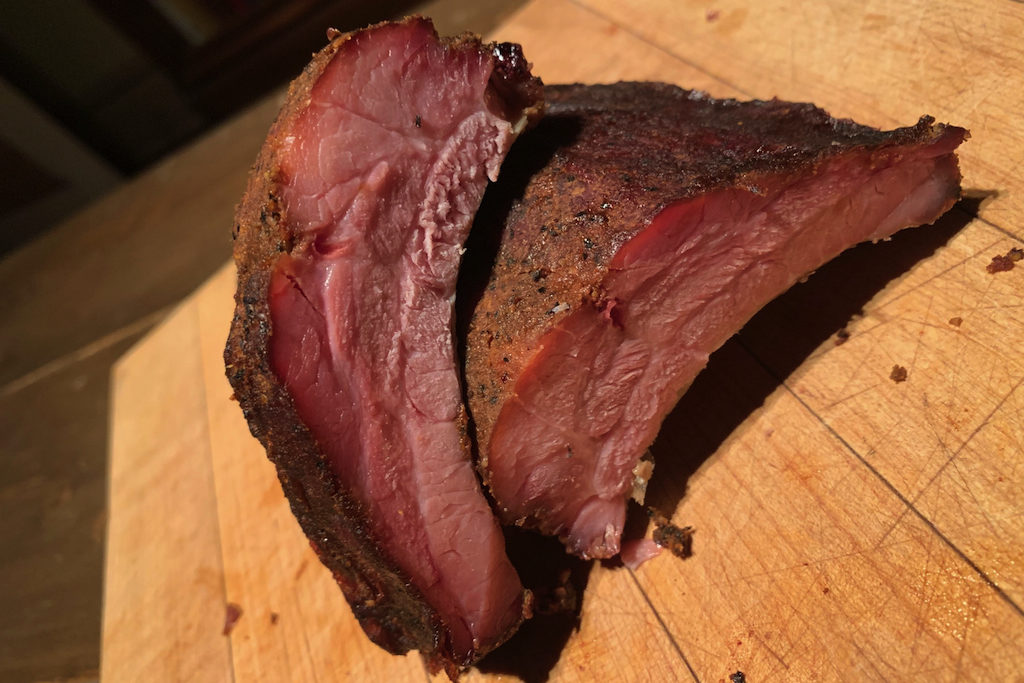 Every week, west-end resident Alex G. prepares for an intense weekend of barbecuing. He simmers down a secret sauce centred around ketchup, molasses and brown sugar. He pats down hunks of pork ribs with salt, pepper, onion powder, garlic powder, paprika, cayenne pepper and other spices. He trims beef brisket before injecting it with beef broth, then he’ll apply a salt-and-pepper rub just before it goes into the smoker.

For the past six weeks, he’s been cooking and selling ribs, brisket and pulled pork in his backyard — in direct violation of local food laws.

Tell any Torontonian about a new barbecue shop and they’ll get excited. Tell them that it’s illicit, they’ll go downright rabid. Sometimes it seems that underground barbecue only happens in grittier, realer towns than Toronto, like in desolate neighbourhoods near downtown Detroit, or at not-very-secret residential pop-ups in L.A. But thanks to Alex, Toronto has joined the delinquents at the back of the cities-of-North-America school bus.

I first heard about a black market barbecue operation from food writer Corey Mintz’s Twitter feed. Judging from the thread, the food was supposed to be good. The owner had apparently been publicizing his initiative, kind of brazenly, with signs around the neighbourhood. So I went out to find one such sign, roaming the streets on my bike, eventually finding one with the address I wanted.

That led me to a small house on a quiet side street near Bloor West. It was a weekday, and as I had just learned from the signs, the barbecue only happens on weekends. It seemed like nobody was home, but I rang the doorbell anyway, just to see. Eventually, an older caucasian man with a goatee, a limp and a cane answered the door.

“I’m looking for the barbecue spot,” I say.

“But are you the guy who runs it?”

Turns out he’s the guy, a 63-year-old Lithuanian Canadian and a self-taught barbecue fanatic. He invites me inside and hands me a business card that reads: “We The North BBQ.”

“I had a stroke a few years ago,” Alex says, indicating that the right side of his body doesn’t function properly. “Anything you do, it takes me 10 times the energy to do the same thing.”

We go into Alex’s backyard, which is like a museum dedicated to his journey through the world of barbecue. At the porch, there’s a standard gas grill from back before he knew what real barbecue was. He hasn’t touched it for years. Nearby is a Weber charcoal grill, on which he began to appreciate the art of cooking with smoke and indirect heat. Off to the side of the house is his next progression, a Big Green Egg-style smoker.

At the back of the yard, there’s an offset smoker from when he really started to get serious, when he began smoking meats for hours with whole logs of oak or apple wood. Then, near the centre of the yard is his latest purchase: a 900 pound Myron Mixon gravity-feed smoker, which he had to get craned in. He obtained it under the expectation that he’ll need to start smoking a lot more meat very soon — especially when people find out what he’s been up to.

Like a lot of pitmasters — including Tom Davis at The Stockyards on St. Clair West — Alex is mostly self-taught, having sought constant improvement through the internet, books and TV shows, with occasional tips from fellow barbecuers. He prefers Kansas City-style barbecue, wherein sweet tomato-based sauces feature prominently. Unless we’re talking about brisket.

Usually, Alex takes orders over the phone for takeout, but sometimes people hang out in his backyard to indulge, too. He rarely offers sides, preferring to focus on the meat. This is legit barbecue, where long, drawn-out smoking sessions are everything. Still, he’s cautious about going overboard.

“After six hours of smoking, you get absolutely no benefit,” he says. “Anyone who says they smoke for 12 hours or more — that’s just a sales pitch.”

Back in the day, Alex was an all-star athlete, breaking high jump records in high school and pulling slam dunks in varsity basketball. He’s been a successful entrepreneur, too, owning and running a machine shop in the ’80s and later becoming a self-employed headhunter. But after his stroke in 2016, he went to a dark place.

“I couldn’t do anything by myself,” he says. “I was always a social guy, and suddenly I couldn’t go out anymore.”

He still had barbecue, though. As he recovered, he’d cook when he could, sometimes inviting friends over to taste what he’d been working on. One of them, who had long been impressed with his cooking, suggested he sell the stuff out of his backyard.

“What do you have to lose?” she asked.

He thought about it. “What do I have to lose?” he wondered. Disability pension, after all, isn’t the picture of luxury. He decided to give it a shot, and since then has found renewed vigour and purpose in life.

“Alex was a super athlete,” says lifelong friend Bruno S., who lives at the house and helps with the barbecue operation. “I know him, and what I see coming through isn’t just rehabilitation. It’s like he’s getting ready for the playoffs. Suddenly, the giant is awake again.”

“I’ve watched him get better and better,” says Ethyl G., another longtime friend. “He’ll take a cheap cut of meat and make it taste really good. After the stroke, he needed something to focus on. He takes pride in it, and I think it’s good for him.”

In order to sell food in Toronto, there is a lot of red tape. You need a licence, you need inspections, you need ventilation, you need proper sinks and dishwashing equipment. You need to get a food handler certification. Alex isn’t worried about inspectors, though.

“They won’t be able to hold me down. I’m doing this two days a week, and the community is happy I’m doing it. I’ve got a disability — I need to supplement my income,” he says. “The city should loosen up a bit.”

When I visited him, he was planning on taking the upcoming weekend off due to weather, so I didn’t get to see the operation in full swing. What I did do was buy a full rack of ribs, which he had smoked a few days prior and was storing in his fridge, vacuum-sealed. I took them home and reheated them in the oven. They were meaty, salty, a little bit spicy and just the right amount of sweet (he likes to add some sauce at the end of cooking, allowing it to caramelize). Even though they weren’t fresh from the smoker, they were great.

What I see in Alex is a guy who has a lot in common with other big barbecue personalities: a willingness to put in the work, an awareness that things could always be improved and a drive to learn more whenever possible. And he’s doing it all with a prominent physical disadvantage.

“It’s not hurting anybody,” he says. “I’ve had a lot of positive responses, and not just from my friends. If Suresh Doss likes it, it must be good.”