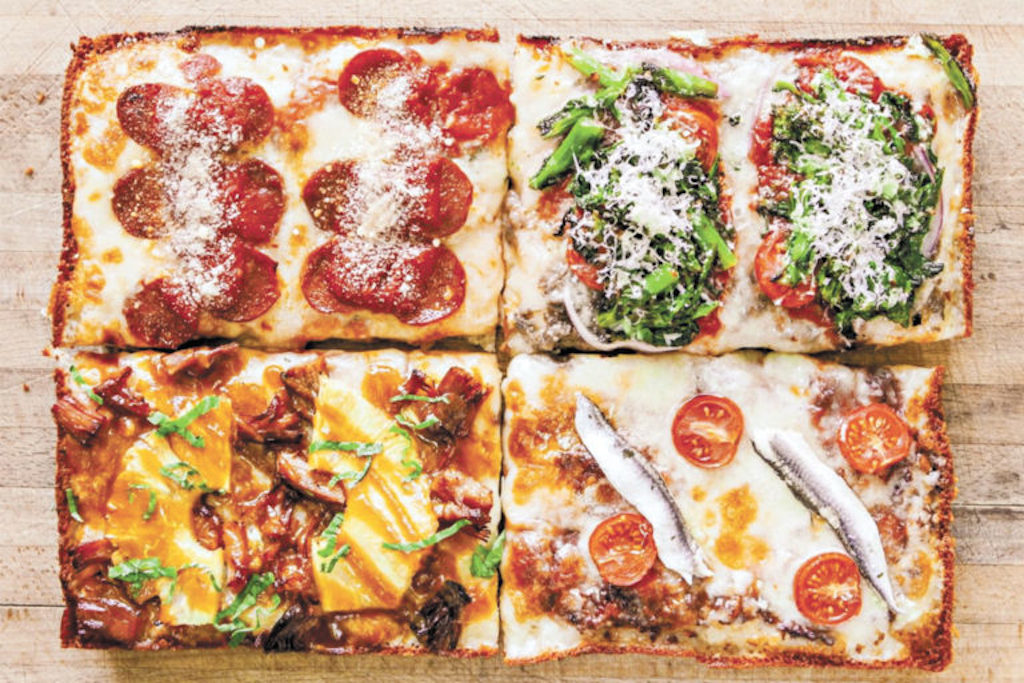 Over the years, restaurants in Toronto that specialize in cheesy, greasy pies have done anything and everything to make theirs stand out — from unconventional toppings to perfecting vegan and gluten-free doughs. But toppings aside, there’s one style of pizza that can’t be called anything else, and that’s the infamous Detroit-style pie.

Most pizzas follow the same formula: roll out the dough, press it into a circular pan, spread on the homestyle tomato sauce, sprinkle generously with mozzarella, layer the toppings, and bake until done. Detroit-style pizzas, affectionately called “upside-down pizzas” are rectangular and always, always have a thick crust that is both perfectly crispy and chewy at the same time (ask for a thin-crust Detroit-style pizza and see what happens). Instead of adding sauce next, the pizza uses Wisconsin brick cheese, as opposed to the classic Mozzarella. Then, other toppings are added, and lastly, the tomato sauce is dolloped on top.

With the U.S.-Canada border still temporarily closed due to COVID-19, those craving a slice can’t exactly hop across the border, so here are five places in Toronto to try Detroit-style pizza.

All of the pizzas in this North York eatery are one size, and cooked in blue steel pans — unique to Detroit’s automotive history. The dough rests for at least 48 hours prior to going in the oven, and each takes at least 25 minutes to cook.

Beauty offers seven unique pies, cut into eight squares. Prices range from $27 for the classic (pizza sauce, Italian oregano, fresh basil) up to $34 for the Beauty BBQ which comes layered in brisket, bacon, and pulled pork.

The menu is unpretentious — there are just eight pizzas available in either small or large. Prices start at $19 for a small and run up to $35 for a large. Toppings include everything from lime sour cream on the “Homenaje” pie, to a more classic house-made fennel sausage crumble atop the “Gatt-Daddy.”

Like the name suggests, Gianna’s specializes in burgers and pizza. Though the restaurant has two specialties, Gianna’s has built a reputation for its Detroit-style pizzas as the establishment cooks the pies in the blue steel automotive parts pans used back in the day in Detroit. The price point is slightly higher — pies range from $26 for a plain cheese to $35 for more decadent offerings.

Gianna’s offers six different Detroit-style pizzas, alongside a full menu that ranges from Italian favourites like stuffed peppers and garlic breads, to burgers, salads, and spreads. Gianna’s is located in the Queen West district.

Most people have heard of the ham and pineapple combo on a classic Hawaiian pizza, but what about whole rings of roasted pineapple paired with a smokey marinated shaved pork shoulder?

Blending Detroit-style with Filipino ingredients, Pabalos Island Pies brings a little island flair to the old-fashioned dough, sauce and cheese recipe. From breakfast toppings like fried egg and sausage atop the Bespren Loganizza, to smoked sardines and cotija cheese on the Tinapa Papa, every creation is sure to satisfy those with an experienced palette.

Getting your hands on a slice from Pabalos is more of a luxury than a convenience.

Rather than owning a dedicated establishment, the company runs pop-ups all over the city, and notifies those eager to try a slice by posting upcoming dates to Instagram. For those that can’t make it to a pop-up, these funky Detroit-style pizzas are currently available to order via DoorDash, but priced at an incredibly affordable $9, so they sell out quickly.

On Sept. 27, Pabalos hinted that another pop-up is coming soon, and details will be shared via Instagram in the coming days. Pies are currently available for pre-order via the website.

There are 16 pizzas to choose from, including a few veggie-friendly options at this joint located in Toronto’s Bloor-Yonge neighbourhood. The pizzas are made in one size only, and range from $16 to $24. As far as toppings go, the selection is relatively tame with standard variations like the meat love (sausage, ham, pepperoni, bacon) and the Oh Canada (bacon, pepperoni, mushrooms).

Not sure what pie to buy? 8Mile has a special “half-half” option for walk-in customers which gives them the option of trying two different signature pizzas at once (half on one side, and half on the other).

And, so as not to let all of that good crust go to waste, there are some tasty dipping sauces on the menu, like the smoked jalapeño. This place also sells dessert, for those who still have room.