Tracy Moore on how she landed her dream job as host of CityLine | TRNTO.com
Skip to content 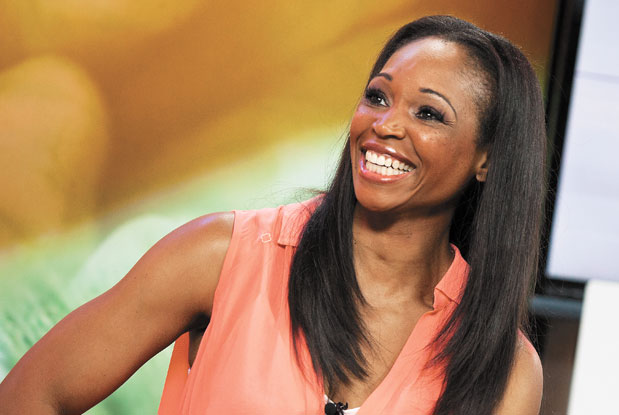 Whether she’s chatting up her live studio audience, navigating spring’s hottest fashion trends or throwing the first pitch at a Blue Jays game, it’s all in a day for television host Tracy Moore.

Though life can be hectic as the host of Canada’s longest running daytime talk show, the Richmond Hill–raised broadcaster says she wouldn’t have it any other way. “Hosting Cityline is a dream job — I am so happy I landed here,” she says over the phone after finishing her morning shoot.

Moore says she surprised even herself when she took the helm of the one-hour talk show that airs across Canada weekday mornings, since it was something she had never envisioned herself doing. “I’d always seen myself as a news person,” she says.

Having worked her way from a behind-the-scenes videographer to an on-camera news reporter/anchor at CBC News World and later as the live reporter for City’s Breakfast Television, Moore saw herself eventually moving to New York to further her broadcasting career.

But fate intervened at a time when Moore herself was reflecting on her future plans.

It was while she was on maternity leave with her son that former Cityline host Marilyn Denis announced she was leaving the show, and Moore was encouraged by a producer to audition for the spot. “It had never entered my mind,” she says. “I’d never thought about lifestyle.”

But during her mat leave, she says, she felt open to new possibilities. “It was all so happenstance,” she says. “[The timing] was a blessing.”

Now in her sixth year of hosting Cityline, Moore, who rang in her 1,000th episode last fall, is enjoying the lighter mood that prevails on a show that covers such topics as typical decor mistakes (and how to fix them), rainy day fashion for kids and homemade ways to help a baby’s sensory development. This year has been an especially exciting one at Cityline, says Moore, since the show recently completed its 30th year of production.

After 30 years, the show continues to evolve with the times. Moore — a self-declared girl’s girl — connects with her mostly female audience through a blog and Twitter as well as on-camera.

Though Moore quite obviously loves her job, that’s not to say her lifestyle is easy.

The busy mom of two (her son is now six and her daughter is three) dismisses any notion of having achieved work/life balance, and gives credit to her husband for “holding it together at home” so she can meet her work commitments.

She says keeping expectations in check also helps. “We know things won’t be perfect — we’ve reconciled things won’t be neat and tidy. It’s life, and we know sometimes we’ll have a crap dinner.”

Moore lives with her family in Riverdale and says the close-knit community she has found there reminds her of the one she grew up in. “Our life here is very much like how I was raised in Richmond Hill. The kids are in each other’s houses, we share recipes with our neighbours, we have a huge Halloween street party — there’s a real sense of community.”

Growing up in Richmond Hill with her parents and older sister, Moore remembers being able to walk everywhere — to her baton twirling classes at Richvale Community Centre, to friends’ houses and the local mall. “It was really sort of the quintessential suburban upbringing,” she says.

It was at Langstaff Secondary School where Moore says she was first encouraged to go into broadcasting. A teacher noticed her vitality when she presented to the class and suggested journalism as a possible career choice. Moore kept that in mind when she attended McGill University, majoring in political science and volunteering at the campus radio station.

After earning her master in journalism at Western University, Moore started her professional career interning. Though Moore’s career has taken her places she couldn’t have anticipated during her days as an intern — like on a Disney Cruise this spring for a Cityline shoot — Moore says she likes to keep it local in her downtime.

She jogs around her neighbourhood to keep her mind clear and frequents nearby parks with her kids. Moore also regularly visits her parents in Richmond Hill and often the family dines out at Il Fornello at Yonge and Highway 7.

If her busy work and personal life weren’t enough, Moore also makes it a priority to volunteer for causes close to her heart. She gives pep talks to disadvantaged women through Windfall — a charity that provides poverty-stricken adults and children with basic needs — encouraging them to seek gainful employment.

When it comes to finding work in her field, Moore suggests aspiring journalists get involved by volunteering at the local level, whether writing for a newspaper or carrying cable for crews at Cogeco or Shaw.

Now more than ever, she says, it’s all about how much experience a person has. It’s also important to do it and see if you like it, she says. As for her success, Moore says that believing in herself has been the key.

“I had to do a lot of pitching and talking to producers. They ignored me for a long time but I was annoying and kept thinking about how to make myself stand out. I didn’t give up.”