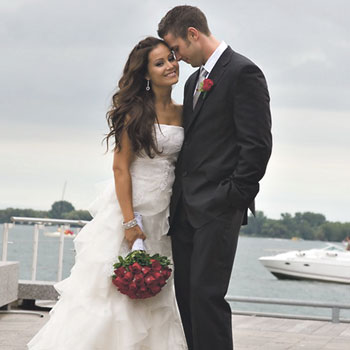 Although Melissa Grelo admits she didn’t feel the connection to her now husband Ryan Gaggi when they first met, more than a year later, a first date led to a blossoming romance. Nowadays, the weekday co-host of CP24 Breakfast and her husband, owner of construction business Alpha Con Inc., enjoy domestic bliss in their Toronto home with their doberman, Sultan. Here, Melissa shares their story:

The first impression
We met for the first time twice. Once, a mutual friend introduced us. While we had a nice conversation and I gave Ryan my phone number, we didn’t talk again until a year and a half later when we bumped into each other at a nightclub. We picked up right where we left off. We were inseparable from that day forward.

The first date
We had our first date three or four days after we met “again” at a restaurant in my hometown of Bolton. Ryan told the maître d’ and waiter that we were celebrating our one-year anniversary and that we wanted the best table in the house. We played along with that story the whole night. I didn’t even know his last name!

The proposal
I had just finished working a long reporter shift. I had a headache, so Ryan offered to make dinner at home. After changing into my ugliest, most comfortable pajamas, we had a great dinner together. Then Ryan said he had to go to the bathroom. A few minutes later, he reappeared, putting his hand on my shoulder as I was eating dessert. I knew exactly what was happening. Before I turned up to look at him, I was already crying. He was reciting something beautiful, but I don’t remember one word! All I recall is Ryan getting down on one knee and proposing. I jumped up and said, “Yes! Yes! Yes!”

The big day
We were married in Sept. 2008 in Ryan’s hometown, Woodbridge. We travelled to Turkey, Egypt and Greece for our honeymoon. It was magical.

Secret to their success
We laugh a lot together, and we don’t sweat the small stuff. You have to love someone for who they are, not who they could be or should be. Love doesn’t ask someone to change. Love says, “I want to be with you as you are.”