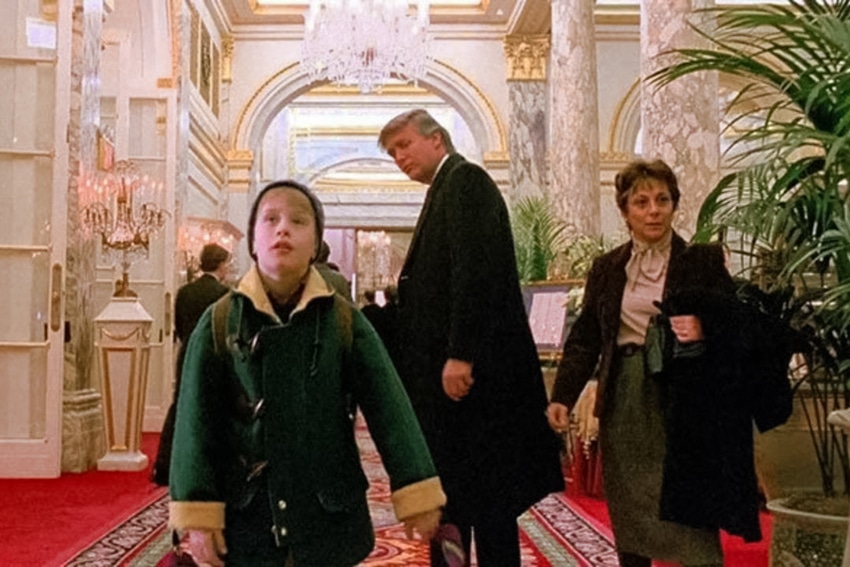 Controversy related to Donald Trump doesn’t take a break for the holidays, and the latest installment of presidential drama has a Canadian connection that has plenty of people talking.

You might think of Home Alone 2 as benign holiday viewing designed to help digest a huge meal, but it’s become the latest source of Trump’s ire. After noticing that the CBC cut out his seven second cameo in the movie, Trump took to Twitter to troll Justin Trudeau.

I guess Justin T doesn’t much like my making him pay up on NATO or Trade! https://t.co/sndS7YvIGR

Trump, who was already a prominent media figure at the time the movie was filmed, appears briefly at the Plaza Hotel in New York City (which he owned at the time) as Kevin McCallister, played by a young Macauley Culkin, asks for directions.

The movie will never be the same! (just kidding) https://t.co/FogquK1ei7

After recently airing the film, the CBC confirmed that the short scene was edited out back in 2014. The broadcaster claims the removal wasn’t politically motivated, but was merely part of an adaptation process that allowed the film to fit into television time slots complete with commercials

“The scene with Donald Trump was one of several that were cut from the movie as none of them were integral to the plot. These edits were done in 2014, when we first acquired the film and before Mr Trump was elected president.” says Chuck Thompson, a CBC spokesperson. Thompson states that eight minutes of the film were removed in order to allow time for commercials.

President Trump immediately took to Twitter to blame Trudeau for the CBC’s decision to remove him. “I guess Justin T doesn’t much like my making him pay up on NATO or Trade!” and then added that “The movie will never be the same again (just kidding)!”

His supporters, including his son Donald Trump Jr., also took to Twitter to express their anger at the Canadian broadcaster.

“Pathetic”, says Trump Jr. citing an article that claims “left-wing bias” led to the removal of the scene.

Others, however, shared their disdain for this being a conversation and one Twitter user re-edited a gif and replaced Trump with Obama, saying “I just RE-edited the Donald Trump cameo scene in “Home Alone 2” so that Justin Trudeau can put it BACK in…”

I just RE-edited the Donald Trump cameo scene in “Home Alone 2” so that Justin Trudeau can put it BACK in – and really piss Trump off – and send that do-nothing LOSER son of his @DonaldJTrumpJr, into conniptions 😉

One thing is for sure: this is the most discussion that Home Alone 2 has ever received.