Turner on Real Estate: a slow and steady march to the bottom is well underway | TRNTO.com
Skip to content 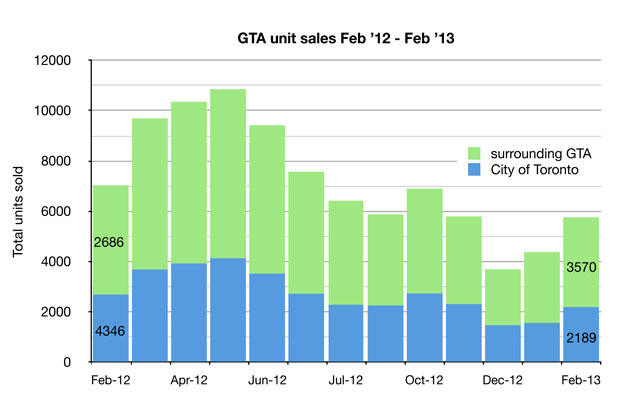 Each spring, they migrate back to the well-treed ’hoods of North Toronto, flitting from property to property in a fecund frenzy. You can stand there, quietly watching, certain there’s but one obsession on their minds: Nesting. These are the house hornies, the drivers of GTA real estate.

“Oh, Garth,” veteran Toronto realtor Stephen McShane writes me after reading my Post column, “the sky is finally falling! How long has it been since you have been preaching that the real estate market’s going to hell in a hand basket … 10 years? Meanwhile, those who ignored your advice (I think I remember you referring to them as fools) and bought anytime in the early 2000s have seen an appreciation of 75 to 100% of their property as well as built equity with their mortgage payments. And they have been able to do this with as little as five per cent of the purchase price as a down payment.”

He makes some valid points. First, be clear about the spring frenzy that’s been making  headlines. As the snow banks melted in the demand areas of 416 this year, there were clogged driveways, busy open houses and multiple offers. But this was not a rerun of the spring of 2012. A year ago, the hot properties were those over $1 million where asking prices constituted opening bids and the “lucky” buyer paid 125% of list price. At the other end of the spectrum, condo sales were fevered, hitting an all-time high.

This year, that house someone paid $1.5 million for a year ago is worth 15% less, according to market stats as well as current information from realtors. The multiple bids are coming in lower price ranges, typically in the $700,000 zone (a 416 starter home in need of organ transplants). Meanwhile, condo sales have collapsed, and prices are stuttering. In fact, in February, the whole market suffered a 15% year-to-year sales drop, with condos off by 20% and houses over $2 million decimated by more than 30%.

Without a doubt, the market has changed. Sales are declining, household debt isn’t. Buyers are tougher and prices under assault. This is what a correction looks like, as opposed to a crash.

Canada’s economy barely has a pulse, despite 2.99 per cent mortgages. Capital is flowing out of real estate. Household and mortgage debt is at record levels, and 70 per cent of families already have a house. Millions of wrinkly boomers are house-rich, cash-poor and poised to sell.

So, where is the demand coming from? Stephen McShane is right. Real estate has benefitted many who bought a decade ago. They were able to use leverage and take a risk that paid off. But this is no guarantee of the future. Buying, and prices, reached an apex one year ago. Ownership is at saturation levels. The population is aging. We’re not on the road to where we have been. Responsible realtors see that.

So, no sky falling. No going to hell. Just a steady grind lower, punctuated by the seasonal tweets of the hormonal and the angry bleats of the salesguys.