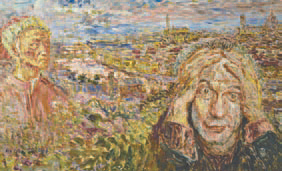 Soleri moved to Toronto from Milan, Italy, a year ago, after visiting a friend in the city. He had worked at Canoe since his arrival, then decided to partner up with Marco Sassone, an old friend who had also moved to town from San Francisco.

“We’ve known each other for 14 years and always thought maybe we would do something together,” says Soleri. “The occasion presented itself, and we decided to take the opportunity to develop something nice and interesting.”

The new 32-seat restaurant will feature contemporary Italian cuisine, much from Soleri’s own Tuscan region.

The menu features homemade bread, pasta and desserts and roasted meats and fish. Sassone’s mural, entitled Florentia, a work that inspired the restaurant name, is permanently installed on site. Florentia is located at 579 Mount Pleasant Rd., 416-545- 1220.

A collaboration between Peter Higley, the restaurant whiz behind the successful Pickle Barrel chain, and celebrity chef Rose Reisman, and her healthy take on gourmet dining, might prove to be a winning formula for Glow, a new restaurant at Shops at Don Mills.

The beautiful space is appropriately airy with huge portions of the restaurant dining room opening on the east wall to the patio overlooking the public green space in the middle of the new shopping area. Holding court in the centre of the dining room is a stunning blown glass piece by Dale Chihuly.

Meals have a health-conscious spin: burgers without the bun; steak, but eight ounces, not a pound, and serve it up with roasted vegetables. There is also a lineup of dessert shooters, at $3 a pop, instead of a whopping big slab of cheesecake — 150 calories in the books, instead of 600 to 800, according to Reisman.

“I think we might be one of the only restaurants in the country without a deep fryer,” says Reisman, who first consulted for Higley at Pickle Barrel where she designed healthy eating options and a budget-focused menu called Tighten Your Belt.

“I designed the menu at Glow based on fresher, lighter cuisine, seasonal and local whenever possible,” Reisman explains. “I call it ‘clean eating.’”

A new pizzeria in Thornhill is getting high praise for its quality offerings and casual, comfortable surroundings. Jazz Pizza, recently opened, operates as a takeout operation but also boasts a comfortable dining room complete with flat screen TVs and a bar menu. Jazz Pizza is located at 8141 Yonge St., 905-731-5299.

The chef, the legend, the food

Star chef Susur Lee may have left the city to seek fame and fortune south of the border, but his name lives on. Last month, Toronto’s SoHo Metropolitan Hotel created a unique culinary package focusing on the work of our most cherished culinary artist.

The package (starting at $385 per person) includes a night at the hotel as well as a number of fun extras. But the focus of the evening is a special five-course tasting menu, developed by Lee for the hotel, that features highlights from his Toronto restaurants Lee and Susur as well as Shang (New York) and Zentan (Washington) in the United States. There may also be items from Susur’s next big venture — Ruyi, slated to be opening in Singapore next month.

“The Metropolitan Hotels team is honoured to execute such a great partnership with Susur Lee, and we are excited to do so in the culturally rich city of Toronto,” said Henry Wu, president of Metropolitan Hotels. For more information, go to www.metropolitan.com or www.susur.com.

Yorkville restaurant Boba closed up and has been sitting idle for a few months. But help is on the way. Zin is a new Asian eatery set to open in late July at the 90 Avenue Rd. location.

The fine folks at venerable Forest Hill steak house House of Chan, at 876 Eglinton Ave. W., have added a smattering of live jazz to the menu on a trial basis. According to the restaurant, if the first night is a success, you can expect other Saturday night jazz events beginning at 11 p.m. Call the restaurant, for further information, at 416-781-5575.

Evergreen and Slow Food Toronto have announced that Sunday, Oct. 4, is the date of the next installment of their very popular foodie affair: Picnic at the Brick Works. Locavores from miles around — not many miles, mind you, this is a local food event after all — will be on hand to serve up a mouth-watering array of food and drink.

Tickets are $90 in advance, and getting one is likely a good idea. Go to www.evergreen.ca/picnic for more information.

Gourmet burger joint with an earth-friendly twist, Terra, has been buried under an avalanche of new businesses in the upscale burger market and has closed its Eglinton Avenue West doors.

Fresh from opening a second Milagro location at Yonge and Lawrence, the owners are eyeing further expansion after taking over Coca on Queen Street West. Look for an opening later this summer.

We’ve known it for years, and finally the United States is in on the act. Congratulations to dessert queen Dufflet Rosenberg for winning a gold Sofi Award at the Sofi Awards in the United States last month, presented by the National Association for the Specialty Food Trade (NASFT).

The awards honour the outstanding specialty foods and beverages of the year in 33 categories. The award was given for the Dufflet Caramel Crackle, specifically the almond and pistachio variety.

Oliver & Bonacini have announced an addition to their growing family of restaurants, with a new operation slated for the Bell Lightbox opening in 2010. The Lightbox, at the corner of King and John, will be the new home of the Toronto International Film Festival as well as an upscale residential condominium.