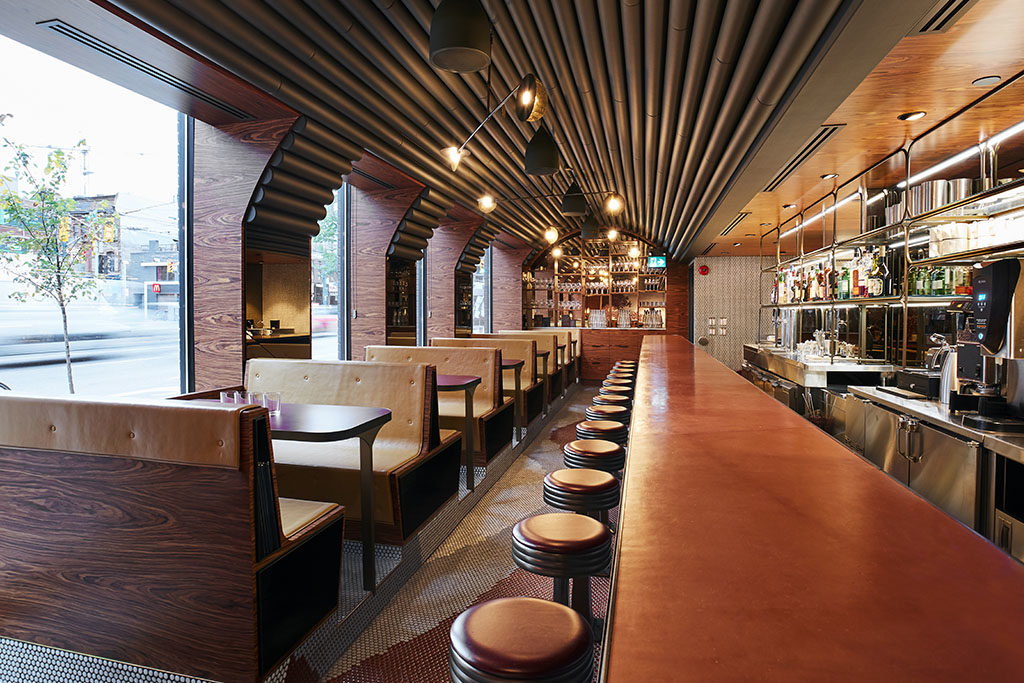 Boasting a French tasting menu and modern decor nestled within a gorgeous Victorian building, Alo has been deemed one of the best restaurants in the country. If Michelin ended up in Ontario with its fancy star system, surely Alo would be deserving of such a designation. It takes weeks to secure a table, with coveted reservations made far in advance. The menu, complete with seasonal ingredients and international flair, is ever-changing. So, when the pandemic hit, Alo Group (which also owns Aloette and Yorkville’s Alobar) had to rethink its strategy.

Alo first opened at 163 Spadina Ave. in July of 2015 and, for a long time, the fine dining business model worked. But, they quickly learned that fine dining is not amenable to a pandemic. What seemed to hit the right now was the model they’d been operating at Aloette — the more casual, bistro-style sister to Alo, which opened at Queen and Spadina in 2017.

Executive chef Solomon Mason describes the menu at Aloette as serving the same concepts and ideals as the menu at Alo, but with a more approachable, casual vibe. The ingredients and suppliers are still locally sourced and seasonal, but craving-worthy options like cheeseburgers and french fries populate the offerings. In short, Alouette is the mix between upscale and casual, the perfect middle ground for a pandemic.

“This is a little more casual than we’re used to, but we found that people were very, very receptive to it,” Mason says. “I think one of the things about our other restaurants is that they’re not as accessible, sometimes you have to book long times in advance. So as soon as this opened, you can click with your phone and have it brought to your house, and people were really into that.”

Alo, Mason says, was never intended to be a takeout space.

“So, when we built this space, we really wanted to elevate what we were already doing, as far as the kitchen, the layout, and how we were going to make the menu,” he adds.

Now, Alo Group has reimagined the Aloette concept yet again, opening a location in Liberty Village that is dedicated almost exclusively to takeout and delivery. It will be the first of a series of locations slated to open across the city in 2022.

The latest location, located in a strip of mostly-local boutiques at 171 East Liberty St. is now the only Aloette location to carry the cult favourite fried chicken, a staple from the Queen and Spadina diner.

Complete with a takeout window that opens to the exterior strip and pre-packaged desserts, the menu offers up soft-serve sundaes — also exclusive to the Liberty Village location — as well as fries, cakes, salads and sides like roasted broccoli and crispy oyster mushrooms.

“For the menu, we wanted to make things that were going to be able to travel well, but were also just very delicious,” Mason says. “We want it to represent the Alo Food Group very well. We wanted it to use a lot of local suppliers and promote the community that we’re already in. We’re really being meticulous about the products that we bring in, a lot of the suppliers are the same that we use in all of the restaurants, in Alo and Alobar.”

While Mason acknowledges that the prices may be higher than traditional takeout and delivery locations, he believes that, in Aloette, you’re getting what you pay for.

“We wanted to deliver 50 per cent more in terms of the quality of our food, the ability to execute it, and just the hospitality that we wanted to bring,” he says.

The Alo Food Group also partners up with wineries in Niagara to offer their own wine selections. In addition, cans of ready-to-go cocktails are on the horizon, Mason says.

“The whole menu has been reminiscent of what we did in the past and where we’re going in the future, with our takeout endeavours and things of that nature.”

Pieces of Alo come into Aloette through more than just the menu, too. The tile from the Alo floor has been reimagined to be the back wall at the takeout location, and the takeout counter pays homage to the bar at Alo.

The design behind the space ( by Commute, which also designed Alo and Alobar) is intentional, inviting people to hang around and check out the neighbourhood, but also give them the option to be wary of the pandemic and order food without stepping inside.

It’s how Alo Group adapted to the pandemic and, while the changes will be permanent, Mason and his team are looking forward to normalcy again, which comes with more growth.

“We have a big plan for the expansion, so this is the first taste of what’s to come with Aloettes,” Mason says. “People should expect to see a lot more of these pop up around the city in the next few years.”

The location in Liberty Village already has regulars and a community feel, which is exactly the vibe Mason and his team were looking to achieve.

Bringing Alouette home involves more than just the food, too. Patrick Pittman’s team wanted to bring a bit of his personality into the takeout and delivery experience, too. “On Spotify, we have an Alouette playlist–a couple of different versions, actually. We give little cards to people who are taking meals to go so that they can listen to it at home if they want more of a restaurant experience,” Mason says. “Another thing that was born out of the pandemic was how can we create a more Alouette experience for people who are eating at home? So things like having a playlist that people can listen to…the original playlist was inspired by Patrick, of course, so it’s kind of upbeat, he likes his hip hop, so it’s just what you’d expect to hear when you’d come to one of our restaurants.”

In the midst of all of the unique changes, Mason acknowledges that The Alo Group is not the only business that’s had to get creative during the pandemic.

“It’s been a hard year, people got accustomed to what you can order at home. I think the availability of what you can order to your house now has grown exponentially,” Mason says. “We want to be able to offer people a better quality experience than just getting food. It definitely awakened a lot of creativity not just from us, but from a bunch of restaurants, now that we’ve had to switch over to take-out. I think that’s going to be a big part of the food scene in Toronto now.”