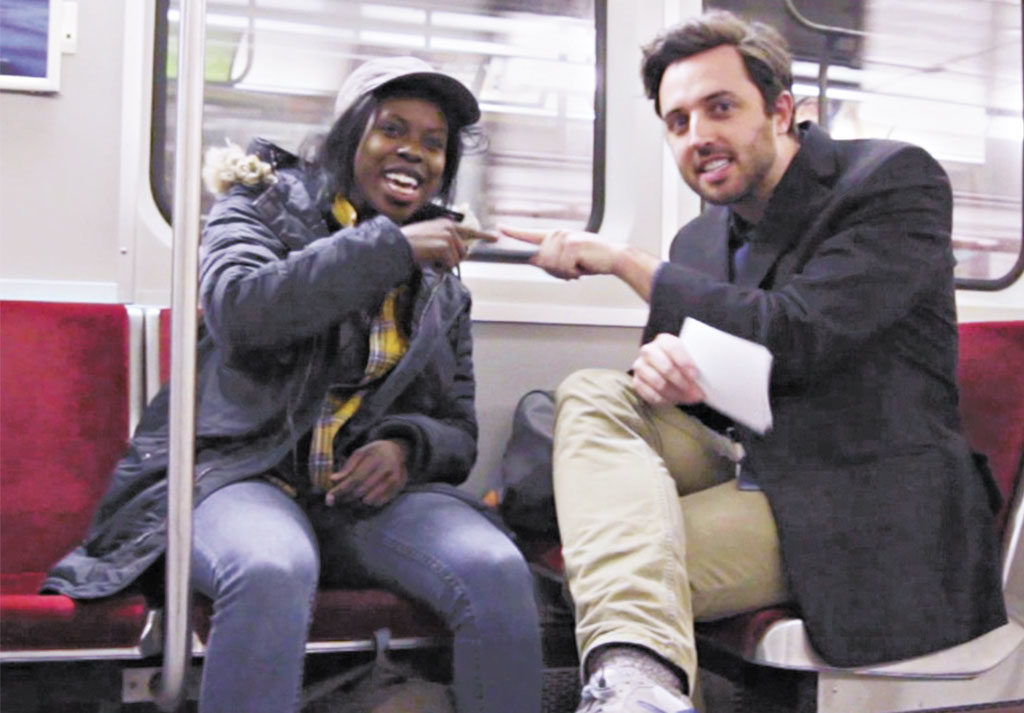 If you’ve taken the TTC subway late at night at all recently, you may have noticed a strange man being filmed as he interviews guests on those classic red velour seats.

His name is Matt O’Brien, and he’s not your average standup comedian. Now he’s sitting down on late night subway trains to interview guests for his new talk show.

Winner of Best Standup at the LA Comedy Festival, O’Brien has taken the comedy world by storm. He’s been killing it on iTunes in the past year, landing the number one spot on the Canadian Comedy charts after releasing his first standup album. Now, O’Brien is working on his novel comedic project, Late Night Talk Show on a Subway, where he hosts and films his own late night talk show … literally on the subway.

Although he has more than 17,000 followers on Vine alone, it’s not just the “Viners” who are entertained by this Toronto funnyman. O’Brien is sparking new interest with his odd approach to his own late night talk show. The idea came to him five years ago, but it wasn’t until recently that he decided to put it into motion.

The show has no script, no direction and, according to O’Brien, sometimes no interest, as many don’t seem to understand the concept of it at all. “It’s just so stupid. It’s meant to be stupid. And some people don’t get that,” he says.

But maybe stupid sells. This late night show seems to be generating quite the buzz. The show is filmed in one take, as O’Brien interviews his guests, and it is later edited into four-minute segments.

The passengers riding the train don’t seem to mind O’Brien filming his show on board.

“It’s funny filming things like this in Canada where everyone is just so polite. Sometimes, if people around us know we are filming, they’ll warn others to be quiet as if we are shooting some major show,” he says.

“Even the TTC employees on board while filming are shockingly supportive.”

What’s next for Matt O’Brien and the Late Night Talk Show on a Subway? “I’d love to shoot something even more ridiculous,” he says, “like a cooking show while riding the TTC bus!”