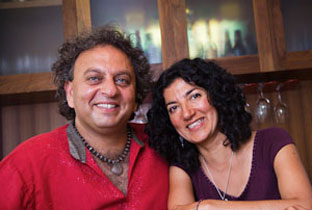 Renowned Vancouver chef Vikram Vij made his way to Toronto yesterday to celebrate the recent rebirth of All the Best Fine Foods and to promote his line of cook-at-home vegetarian meals available there. We took the chance to chat with him about dining in Toronto, the joys of snacking and his award-winning cookbooks, co-written with his wife.

Where do you like to dine in Toronto?
Jamie Kennedy’s restaurant last night. Had some fabulous food there. Really simple, well done, good food. I don’t eat out much when I’m here because I’m usually working, and when I stop working I go to sleep, that kind of thing. But Mark McEwan’s place, I’ve heard really good things about that place. I’ll probably go for a glass of wine tonight there. Or Donna Dooher’s place, [Mildred’s Temple Kitchen], I just went by there to see the space. It’s a beautiful space she has there.

Other than calories and nutrients, what should people get from eating?
A pure pleasure. An orgasm of the mouth. Food is not just about filling yourself up. Food should be a total pleasure. I mean, if you’re eating a beet, taste the beet and taste the flavour of it, and you can tell the farmer worked really hard for it and sense the chef’s passion behind it.

What do you snack on?
What do I snack on? I would have a nice little prosciutto or something like that. I love my cold cuts! I’ll have chips sometimes, but good quality homemade style chips. I do love Indian snacks. It’s my only guilty pleasure. I love those Surati from Bombay, and Haldiram from Delhi. I know it’s junk but I love the flavour of them.

What is it like running a restaurant — two restaurants — with your wife?
Tough. Really tough. I would not advise it to anybody else. It’s a lot of work. You know, when you’re too passionate about it. If one of you could be relaxed and just let it go, that would be different. But when you’re both this passionate about it…that’s when the tough stuff happens.

“Indian food” is a broad category. What do North Americans expect at an Indian restaurant, and what might surprise them at Vij’s?
People expect a lot of butter chicken, chicken tikka masala and so on, and there’s nothing wrong with those classic Indian dishes, but there is more to Indian food than that. [At Vij’s], we blend things from where we live — including local produce and local vegetables as much as possible — with our Indian heritage and Indian culture, using those spices and combining those flavours. So I won’t say it’s a fusion; it’s what the world is today. It’s what today’s food is. It’s not about Old World; it’s not about New World. Even in India, it’s not the same way it was. I think it should be as the chef prepares the dish, with ultimate love and passion. I wouldn’t go by saying “it has to be done that way."

There is no vindaloo in your first book. Did you just run out of room?
[Laughs] You’ll never find that. You’ll never find butter chicken either…Why would I do vindaloo or chicken tikka masala or chicken korma? That’s like if someone opens a North American restaurant in India, a pancake restaurant, and then everyone thinks all that North Americans eat is pancakes. Unfortunately, many Indian restaurants have almost the same menu. But if you go into Indian homes, people always use different flavours and make different dishes. And that’s the beautiful thing about our cooking. We have the largest “democracy of food.” You can do whatever the hell you want and get away with it!