We will survive: Q&A with Tim Flannery, speaking at the Toronto Reference Library tonight | TRNTO.com
Skip to content 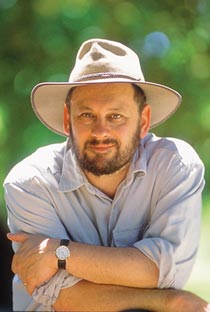 Can the planet Earth sustain humanity’s ever-growing population? Internationally acclaimed scientist and world authority on climate change Tim Flannery will have hopeful things to say when discussing his new book, Here on Earth, at the Toronto Reference Library tonight. With Earth Day fast approaching and the federal election a couple of weeks away, he says the best thing we can do for the environment is get political.

Your latest book, Here on Earth, seems more optimistic than your 2009 book, Now or Never: Why We Need to Act Now to Achieve a Sustainable Future. What has changed?
Now or Never was very much a call to arms. We hadn’t had the Copenhagen meeting, we hadn’t had the Cancun meeting. With Here on Earth I try to answer a more fundamental question: “What are our chances of getting through all of this?” So I take a long term view to answer that by going back to the beginning, to evolution by natural selection, our relationship to the planet and how we evolved. So they’re different works, really.

How important is it to have a global treaty on climate change?
There was a widespread expectation [at Copenhagen] that we’d get a global treaty, so there was a lot of disappointment. But what we did get was a thing called the Copenhagen Accord, and it brought in for the first time the developing countries and committed them to targets, and as a result of that we’ve got about two thirds of the emissions reductions we need, in the form of pledges, to avoid dangerous climate change. We’ve got to get the other third. What happens if a country defaults on their pledges? Well for me there’s not much difference between that and a global treaty [which] is a legal document. I mean, when Canada defaults next year on its Kyoto obligations I don’t think you’ll see anyone arresting Stephen Harper. It’s sort of hard to enforce. [But] there has been great progress made in fleshing out the treaty.

Maybe Canadians feel powerless. Your colleague, Toronto environmental writer Alana Mitchell, has said the knowledge about how we can save the environment is available but not widely understood. Is that the most important obstacle?
I don’t think that ignorance of the solutions is the problem. When I look at Canada from the outside, I see a democracy where there’s a first-past-the-post voting system, so you can get 10 per cent of the vote and get zero representation, which is an imperfect democracy. Modern democracies need to move forward and give people truer value for their vote.

To control climate change, do we need to learn a whole new way of living?
I don’t think so. What we’re really talking about is changing the energy base from fossil fuels to clean energy resources. But we’re in a race against time. We have to turn the emissions curve down this decade, and then turn it steeply down the following decade.

What could the media be doing to better keep environmental concerns on the front page?
In Australia the environment is front page news nearly every day of the week. I’ve been astonished: I arrived here in Canada the day that the election debate was on TV. I watched it in my hotel room waiting for the environment, inevitably, to come up, and it just didn’t. So it’s not just the media at fault. It’s the politicians. Where are the heroes of the environment pushing forward to make their case? If Elizabeth May had been there for the debate, we might have got something quite different. But I think the powers that be have been very skillful at maneuvering the debate away from environmental issues.

Your books do very well, but many people will never read them. With the several hours not spent reading your books, what could someone do to have a meaningful impact, on how society operates or in their own life, with regards to climate change?
In those few hours, I would say, whatever your views and beliefs are, get involved in the political process, because that is just tremendously important. I guess you can sense my frustration at the incomplete democracies that we live in. A revolt is going to come, perhaps not in a violent way, but younger people are going to use the Internet to get together and say “This isn’t working. We need something better than this.”